The Dream Lord himself, Toby Jones was recently cast to face off against another hyper-intelligent being with social issues in Sherlock but, with such a plethora of Arthur Conan Doyle rogues to choose from, we weren’t sure who he was playing or how he might attempt to outwit the great detective…until now.
Last month it was announced that Jones would appear in Season Four’s second episode, which is directed by The Day of the Doctor helmer Nick Hurran. Speaking at the time Jones said he was “excited and intrigued by the character,” while Sherlock co-creator Steven Moffat teased that he would be “bringing to life one of Doyle’s finest villains.”
And now, thanks to Jones’ own online CV, we now know that villain will be…Culverton Smith.
The character originally appeared in The Adventure of the Dying Detective , a short story written by Sir Arthur Conan Doyle in 1913. Smith is described by Conan Doyle as ‘small, frail, twisted’, with ‘a double chin…high bald head…and menacing grey eyes’. 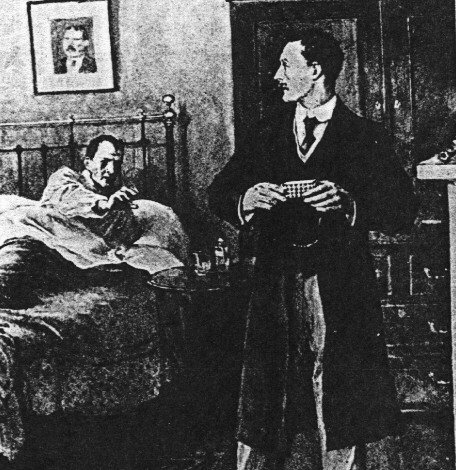 Smith is a slimy character who uses his knowledge of tropical diseases to murder his nephew. He attempts to kill Holmes with an infection concealed in a spring-loaded device contained within an ivory box. Holmes feigns illness in order to extract a confession from him in a tense exchange between the bed-ridden Holmes and Smith, his would be killer.
The scene would be marvellous if performed straight by Benedict Cumberbatch and Toby Jones but you can imagine how the infection may be modernised by Sherlock.
The fourth season of Sherlock is expected to air on BBC One in early 2017. You can read the whole of The Adventure of the Dying Detective here.

by Andrew Reynolds time to read: 1 min
News Spooks Director Helming Doctor Who Series 10 Episo…
News Will She Come Back? Capaldi Wants Susan to Return…
1
%d bloggers like this: