The Editors of Doctor Who Magazine

Though its name may have changed, it’s release schedule altered and it’s covers undergone a series of make overs during its 500+ issue run, Doctor Who Magazine or DWM, has at its heart remained striking similar in intent to the mandate first laid down by its inaugural issue.
Continuity in the form of regular features, comic strips and the odd major news scoop here and there – not to mention that it’s retained the same numbering system since its first issue –  have all helped the magazine survive where other sci-fi publications have fallen by the wayside.
This is in no small part due to each editor respecting, maintaining and finessing the lineage with innovations that retain the same affection, passion and, occasionally, the same snark that you might find when die-hard fans get together to discuss the show.
So who were the men and women responsible for keeping that conversation going? Founding editor and trailblazer, one of Skinn’s greatest contribution to DWM was keeping the magazine editorially free from the BBC, which allowed it to get the scoop on news items while retaining a strong editorial voice, free from BBC input.
The former head of Marvel operations in the UK, he’s been dubbed the ‘British Stan Lee’ due more to his prolific output.
Since leaving Marvel, he founded and edited Warrior, which featured Alan Moore’s Marvelman and V for Vendetta, then produced a range of 2000 AD coloured reprints for America before settling into editing and publishing Comics International, where he’s been at the helm since 1990’s.
He was also one of driving forces behind DWM fanzine Vworp, Vworp – a loving, brilliant tribute to the magazine he founded back in 1979. 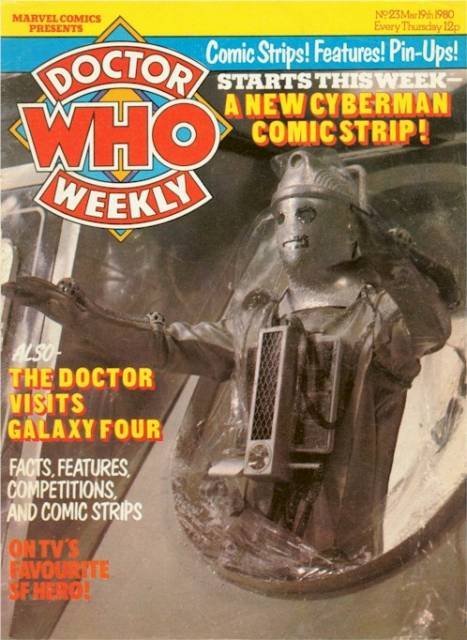 A comic book artist, writer and editor, Neary was in charge when the magazine made the switch from a weekly to a monthly release schedule following declining readership figures. The move proved to be a success with Neary working on 25 issues before departing the magazine. He later returned to ink the Fifth Doctor comic strip The Stockbridge Horror in 1982.
Neary went on to become editor-in-chief of Marvel UK in the 1990’s. 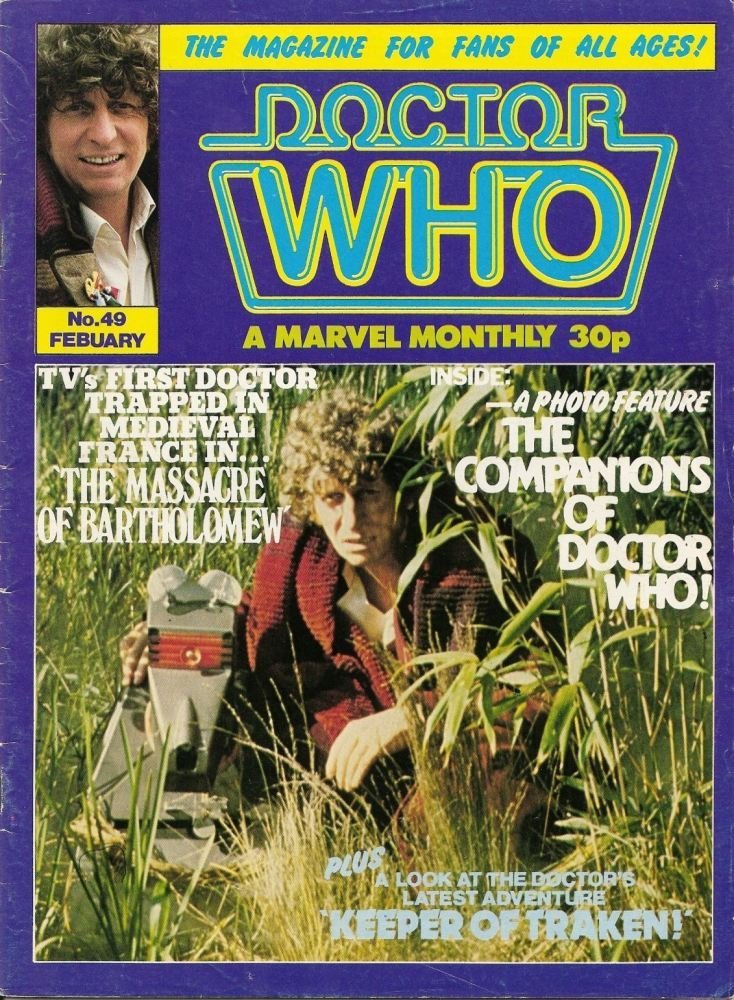 Inheriting the title as overseer of all Marvel’s monthly titles, McKenzie cemented DWM’s reputation as a long standing success with smart innovations to established sections and content targeted at its older readership.
McKenzie left Marvel in 1985, and after returning to DWM to pen comic book stories under the pseudonym Max Stockbridge, he joined the editorial team of 2000 AD as a freelancer, and from 1987–1994 he created a number of stories including Bradley, Brigand Doom and Journal of Luke Kirby. He also served in 1994 as the comic’s editor. Answering an ad in The Guardian for McKenzie’s role at Marvel UK, under his new brief, Ridout took the helm during a period of upheaval for the show, which had recently been put on an 18-month hiatus; under changing and difficult circumstances, he was charged with maintaining readership despite having no new programmes to publicise and push sales.
Ridout was editor for the #100 edition of the magazine which boasted the fabulous celebratory ‘Six of the Best’ article and ushered in a new look for the title.
After Marvel UK sold Starburst magazine to Visual Imagination, the company couldn’t justify paying Ridout to maintain one magazine. He left Marvel in 1985 to become part of the team that founded independent publishers Acme Press.
He went on to become editor-in-chief at Manga Publishing. 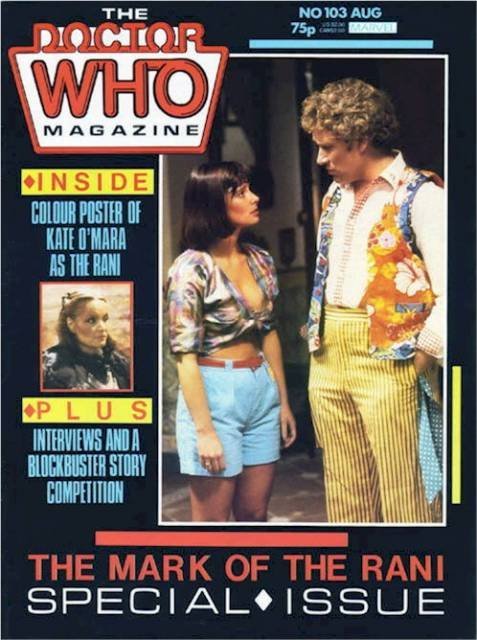 Following the brief tenure of Ridout, Cranna, who had a strong editorial background bringing The Transformers magazine to the UK with Marvel, fought for DWM’s survival when its parent company threatened to pull the plug in 1988.
Giving the magazine a clear, more populist look, Cranna eventually left the role when her workload at Marvel, which included editing Sindy, Marvel’s Annuals and a promotion to Magazine Group Editor, became substantially more difficult to juggle. 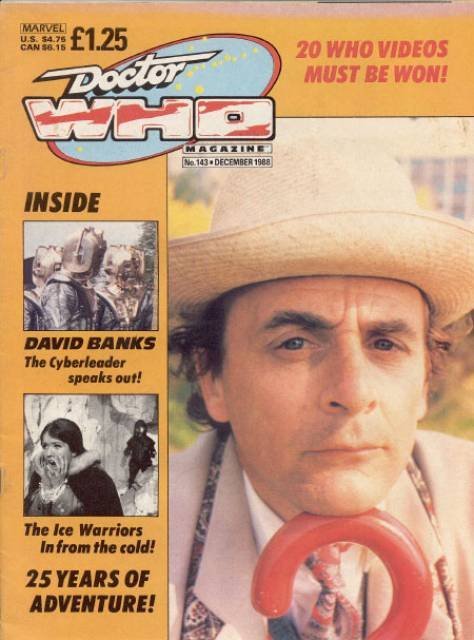 When it became clear that the show would be off the air for the foreseeable future, the magazine had something of a change of course; with a dwindling number of floating readers it became necessary to establish DWM as something of a niche publication whose targeted audience would be hardcore fans, which John Freeman would quite happily proclaim to be.
The ‘by fans, for fans’ ethos brought about the arrival of writer Andrew Pixley, a key component in DWM’s meticulous identity.
Freeman later became a Senior Editor for Marvel before leaving to go freelance in 1993. His excellent Down the Tubes comic site is a must for comic book fans and industry nerds alike. 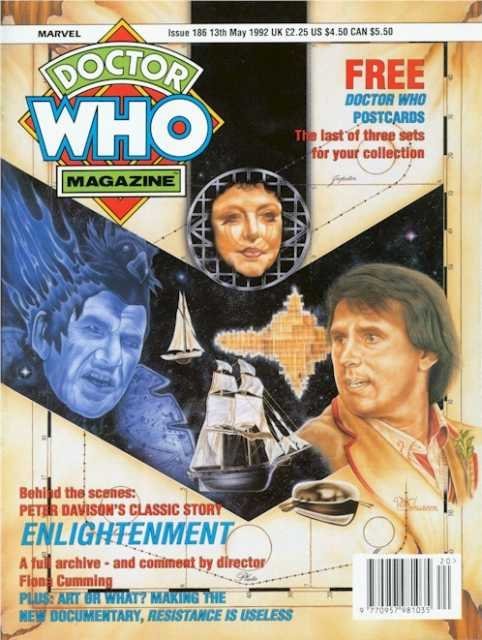 Building on the work of Freeman, Russell took the magazine into ‘partwork’ territory, expanding the focus on meticulously documenting the shows history while also creating new history by bringing in previous incarnations to the magazines much cherished comic strips. Joining Russell as co-editor after working as Associate Editor on the title. The pair found themselves surplus to requirements when Marvel UK was sold to Italian published Panini, who then let go many former Marvel staff members.
Hearn was also the writer of Doctor Who: The Vault. Escaping the axe that fell on other Marvel staff members, Gillatt, the youngest editor so far, brought with him an irreverence and wit that’s still a part of what makes DWM such a great read. Gillatt’s reign caught something of a break when, in 1996, the TV Movie brought the show out of mothballs and back into the spotlight.
The TV movie also helped inject life back into the comic strip as the Eighth Doctor set off on all new adventures with companion Izzy in tow. For one issue only, the reins of DWM were handed to Ace herself, Sophie Aldred. The idea was to look back at Andrew Cartmel’s plans for Season Twenty-Seven after the show was quietly cancelled by the BBC; the season where we were to say goodbye to Ace and welcome a new cat burglar companion…Russell T. Davies had a similar idea with Planet of the Dead. Initially a victim of the Panini cull, Barnes returned to the title as Associate Editor before co-editing issues #262 and #263 while Gillett working on his book, Doctor Who: From A to Z.
Barnes became editor and broke with the tradition of a single reviewer for episodes, throwing the role out to a group of critics – a model that’s used to this day.
He left the title in 2002 to become editor of Judge Dredd Magazine. Bring a healthy dose of humour to proceedings, Hickman made several changes to the title that remain to this day; including the reintroduction of the Matrix Data Bank.
Under his tenure the magazine soared in popularity, welcoming new readers with open arms while maintaining a healthy relationship with those tasked with bringing the show back in 2005 – the Production Notes section has been a source of insider news and extended insight into events both on and off screen ever since its introduction in issue #341.
Hickman – who’s always good value on Twitter – has also found success as a screenwriter, penning episodes of The Sarah Jane Adventures along with Gareth Roberts and Wizards Vs Aliens. After spending four and a half years as Assistant Editor alongside Clayton Hickman, Spilsbury took over in 2007, overseeing several revamps, an increase in page numbers and some of the best readership figures in the magazines history.
Spilsbury is the magazines longest serving editor and recently saw out issue #500 with an absolutely stunning celebratory edition.

The Editors of Doctor Who Magazine