Warning: this will cost you either 79p or 99p.
A few weeks ago, The Doctor Who Companion had a special ‘big questions’ week, looking at life’s huge conundrums through the lens of the Whoniverse. Does God exist? Is war ever justified? Why didn’t they produce a Star Wars figure of Grand Moff Tarkin? How come people always ignore the sign ‘level load’ on the side of skips? When did I start using the word ‘Whoniverse’ as if that’s normal? That sort of shebang. Well, the big question from my editor that week was, ‘Where the Hecate is that Torchwood/UNIT article you promised me? Eh?’ Okay, it’s a few weeks late, but here it is Philip. You asked for it.
Thanks to Douglas Adams we know the answer to life, the universe and everything. It’s 42, dear. And not just in the Hitchhiker universe (the Hitchhooniverse if you will) but in our Whoniverse too. That’s thanks to numerous cross-over connections those clever chaps who run the internet have helpfully listed.
So, while Douglas helpfully let us know the answer to everything, he singularly failed to resolve some of those niggling smaller (but in some ways more important) questions. Like which is better: Torchwood or UNIT? Eh ‘genius’ Douglas Adams? Thanks for leaving us with THAT. Well, this is our chance (don’t expect me to do all the work) to look at both sides of the argument. Clever eh? The ‘both sides’ reference. Oh, sorry, you won’t get the joke yet. Come back here in a few paragraphs’ time and you’ll be hooting with laughter like Russell T Davies reading the Love & Monsters Hoix/bucket scene to Russell Tovey after inhaling Nitrous oxide.
Speaking of Russell T, it was he that infuriated people by creating Torchwood in the first place rather than bringing back UNIT. What, he did bring back UNIT too? Oh. Well, he shouldn’t have abandoned UNIT in favour of Torchwood. Oh, he didn’t do that either? Right. So let’s look at the differences… ‘Torchwood: outside the government, beyond the police. Tracking down alien life on Earth, arming the human race against the future. The twenty-first century is when everything changes.’ Tell that to the UNIT boys, Cap’n Jack, who’d been battling a plethora of earth-hungry aliens back in the creaky old 20th Century. ‘In the last decade, we’ve been sending probes deeper and deeper into space. We’ve drawn attention to ourselves, Miss Shaw,’ says Lethbridge-Stewart (and don’t call me Miss, Brigadier, not in public). You’re probably less familiar with the last quote because it’s from an obscure Doctor Who story called Spearhead from Space. (Let’s start a campaign to get it remastered, re-released once again on Ultra HD DVD.)
There are many differences between Torchwood and UNIT. And the biggie is that Torchwood comes with a special sticker: PARENTAL ADVISORY EXPLICIT CONTENT. Yes, those institute boys and girls are a little bit on the lewd side of family friendly. Lock up your toddlers, put auntie in the cupboard, hide your Adipose… I mean you wouldn’t expect to know the sordid details of the Brigadier’s love life (um, Planet of the Spiders…), or see Sgt Benton’s little soldier in a full-frontal nude shot (oh, The Time Monster), or have one of the dependable UNIT boys betray his troops and pull a gun on his pals (yes, Invasion of the Dinosaurs). So maybe there’s more that UNITes than divides them…? No, you want conflict, blood, guts, semen (eww)?
There were brilliant stories on both sides (ooh, that phrase again, must be building up to something); Torchwood blew us away with the gripping Children of Earth, then killed itself off with Miracle Da(yawn). UNIT has a similarly chequered run of stories from the brilliance of The Daemons to the ‘can this be the same cast/writer/producers?’ of The Time Monster.
But the two forces come from such different times and places that I’ve been hunting about to find a fair point of comparison. Something that we can easily put side-by-side, review, rate, and decide from. Because, if I’ve learnt anything from being a Doctor Who fan it’s that we want to declare the loser. 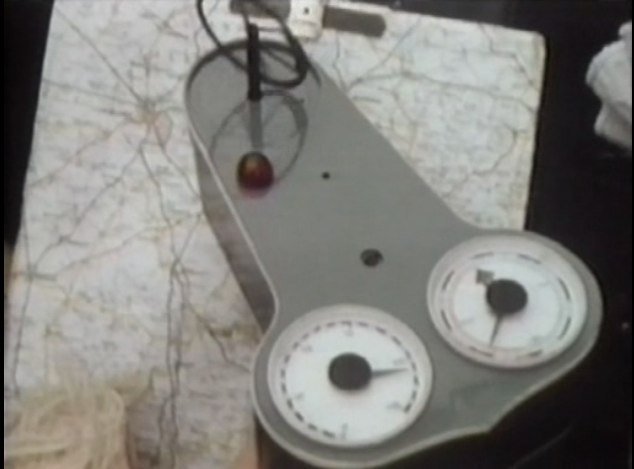 The 21st Century was indeed when everything changed as we discovered how to judge people publicly and savagely purely on their ability to sing. The X Factor has revolutionised our lives and launched the glittering careers of the winners: Steve Brookstein, Shane Ward, Matt Cardle… and cast the losers into outer darkness, JLS, Olly Murs, One Direction… So, I propose a sing-off to decide the Torchwood/UNIT question with the winner triumphant forever and the loser dematerialised out of existence. Fair’s fair.
And I want none of this ‘oh we got 48% of the vote – can we have a re-run’ business? I think what we’ve all learnt from the last few weeks is that once a decision has been made it’s best if the winners stick around, act quickly and make some clear decisions for the good of everyone. Otherwise, we’d be in a right mess.
So, I’ve discovered the still point, the gassy beam of singularity where Torchwood and UNIT meet. And it surprisingly features songwriter, chanteuse and latterly loony lady (she thinks she has Morgellons. FYI that’s the made up disease for mad people, not the beady-haired easily-defeated robot lot from Destiny of the Daleks). You see, back in 1969, Joni wrote one of the greatest songs of all time, Both Sides, Now. And I know I can come across as a bit flippant, but for me it’s one of those tracks that can reduce me to tears. That and Doctor in Distress.
What’s even more amazing about the song is that Both Sides, Now has been covered by both Captain Jack Harkness himself, John Barrowman, and the resourceful Sgt Benton star John Levene. John vs John. It’s perfect.
What do you mean, you didn’t know John Barrowman was a singer? Get with the programme, sister. I actually once went to a Barrowman concert, an open-air affair in the grounds of Hampton Court Palace, get me. A friend gave us free tickets and I can honestly say it was the most fun you can have laughing at the absurdity of it all while surrounded by frowning 50-year-old musical-loving ladies in identikit fleeces. If you were there, I was the annoying bloke who heckled Barrowman’s stage patter:

John B: Who loves Barry Manilow?

You get the idea… 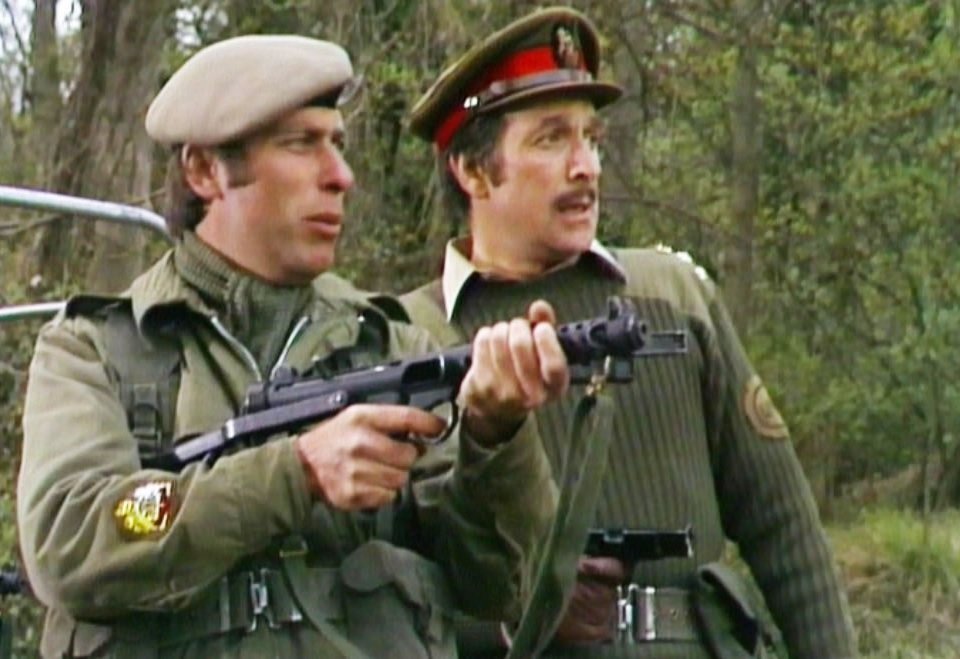 Enough procrastinating. I said enough! Stop it! ‘Tis time to put the mental back in monumental and make that decision once and for all…
Okay. This is the point at which you may need to spend either 79p or 99p. Stick with me, it’s worth it… You see those helpful chaps who run the internet have uploaded John Barrowman’s version of Both Sides, Now onto something called Spotify (no, me neither…).
But in some prejudental move they have not granted the same courtesy to John Levene’s 2012 classic album The Ballads of Sergeant Benton. And before you cry, ‘Well it IS a little bit obscure’, I’d like to point you in the direction of the album Jon Pertwee Sings Songs For Vulgar Boatmen, which you can listen to on Spotify. Wait, come back! Don’t get distracted, we’re about to answer the question. Actually, if you make it through The Buxom Country Maid to Lucky Jack, you’re made of sterner stuff than I. Ooh arr.
So, the first thing you need to do is either visit Amazon and pay 99p or iTunes where Levene’s Both Sides is a steal at 79p. You can listen to Barrowman’s attempt on Spotify or in the video below. Now, to be fair to both artists (stop sniggering at the back), can I ask that half of you listen to Barrowman first and the other half to Benton. Okay? You can sort that out amongst yourselves.
Sorry, you were expecting me to answer the question? We live in a democracy people, please cast your vote in the comments below. And I promise to resign if John Levene doesn’t win by a landslide.

Headphones on, I’m going in…

Sex gas, Cyberwoman, Blowfish face, and Jack and Ianto in a clinch
and sweary smarminess everywhere, I’ve looked at Torchwood that way.
but now I think it was quite fun, but maybe not for everyone
So many things I would have done instead of Torchwood: Miracle Day
I’ve looked at Torchwood from both sides now,
from up and down, and still somehow
it’s Torchwood bemusement I recall.
I really don’t know Torchwood at all.
The Brig, Benton and five round rapid, the dizzy dancing Corporal Bell
as every child’s nightmare comes real; I’ve looked at UNIT that way
but now it’s a different setup altogether. They’ve got women bosses and everything
And given we’ve moved on in 50 years, that’s probably okay
I’ve looked at UNIT from both sides now,
from give and take, and still somehow
it’s UNIT dating confusion I recall.
I really don’t know UNIT at all.

by Peter Shaw time to read: 6 min
Features 10 New Series Novels All Doctor Who Fans Should Re…
Features 4 Torchwood Serials Worth Re-Evaluating
9
%d bloggers like this: