Reviewed: Big Finish's You're Him, Aren't You?

For all that his best known role saw him journeying through outer space, Paul Darrow comes across as a down to Earth type in this, the newly released audiobook of his 2006 autobiography. An opening anecdote sees him seated in a make-up chair alongside the academic, director, and performer Dr Jonathan Miller who cheerfully tells him that life has no meaning, that human beings are born, live and die, and that we shouldn’t place any greater significance than that on our existence. As Darrow says, it’s a rather bleak thought (“No wonder people turn to drink…”) but the story is just his way of telling us that he’s not going to be making any grand claims about the importance of his art.
Darrow is realistic enough to know that the vast majority of those buying this book are going to be fans of Blake’s 7 – the BBC1 sci-fi drama created by Terry Nation which ran from 1978-1981. The fact that his best-known role, that of the self-serving anti-hero Avon, was decades in the past doesn’t seem to bother the writer, who gives the impression throughout that he’s grateful for whatever success came his way in the notoriously insecure profession he opted for against the wishes of his father, who would have preferred him to be a lawyer.
As his many fans will surely have hoped, a fair chunk of the book is devoted to Blake’s 7 and there are some interesting recollections of what it was like to be there at the start of the cult show. After a less than encouraging start when he found that the script for the opening episode didn’t feature his character at all, Darrow quickly realised he was on to a good thing and that his part offered far more material for an actor to get his teeth into than that of the series lead Blake, played by Gareth Thomas. He recounts how Thomas’s departure after two series led to great concern among those who remained that the plug would be pulled on the show (in the event there would be two further series) and he has considerable praise for Terry Nation and series script editor Chris Boucher, the two driving forces behind the programme’s success in terms of its premise, storylines, and scripts. 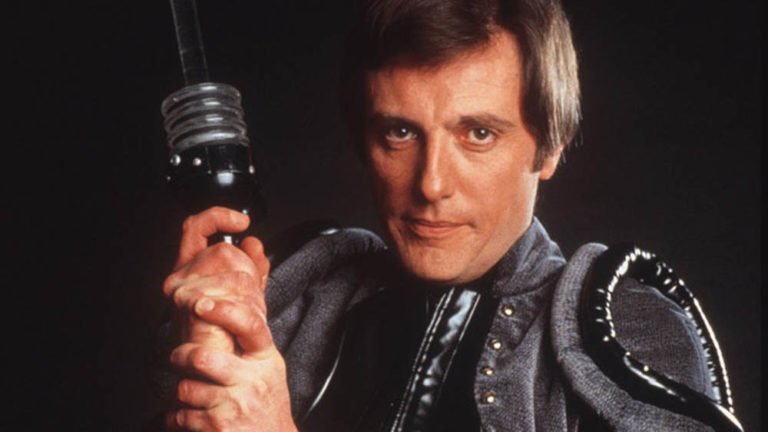 Darrow is honest about the series’ limitations (as he says himself, they weren’t making Shakespeare): the chronic shortage of money to spend on special effects which made it the butt of many jokes; the thinly written roles for the female crew members; and the fact that some episodes haven’t stood the test of time too well. But given the continuing enthusiasm for the show among its fans he’s surely correct in arguing that Blake’s 7 offered a new spin on an old format and that the lead characters were no mere stereotypes.
It’s not all Blake’s 7, however, and Darrow’s memories of his early life in post-war Britain and his journey to becoming an established actor (including his days sharing a flat with John Hurt and Ian McShane) make for an engaging listen. He stresses the importance that luck plays in an acting career but in doing so perhaps undersells his own gifts as an actor. There’s a rather moving chapter where he remembers how he was persuaded by theatre impresario Bill Kenwright to play Elvis Presley on stage in Alan Bleasdale’s Are You Lonesome Tonight? After overcoming his initial reluctance that he could pull it off, Darrow found the role one of the most rewarding experiences of his career but, ever honest, openly admits that the play’s writer didn’t rate his performance very highly.
Paul Darrow has appeared twice in Doctor Who, of course, although he doesn’t devote a lot of time to it here. His primary recollections of his appearance in Doctor Who and the Silurians are of Jon Pertwee’s wicked habit of making actors laugh just before a take and of being half-deafened filming a cave-based shoot out. Like many who have watched it, he found Timelash difficult to take seriously and offers as his defence for his OTT performance as the story’s villain that he was just trying to inject a little oomph into the proceedings by giving his take on Richard III.
There are, however, some fun stories from convention appearances including (my favourite) one about how he and Peter Davison declined to go for a run with Star Trek’s George Takei, opting instead for a leisurely breakfast – a second cup of coffee for Peter and a fag for Paul.
This kind of amusing anecdote makes Paul Darrow good company in an unabridged audiobook that fills seven discs. It’s possible that his less than wholly serious approach to the book stops us from getting to know the man behind the voice as well as we might have hoped but, while You’re Him, Aren’t You? may not qualify as an essential purchase, it offers a fun journey through the life and career of one of British sci-fi’s most recognisable personalities.
You’re Him, Aren’t You? by Paul Darrow is available from Big Finish for £15 (CD) and £12 (download).

Reviewed: Big Finish's You're Him, Aren't You?