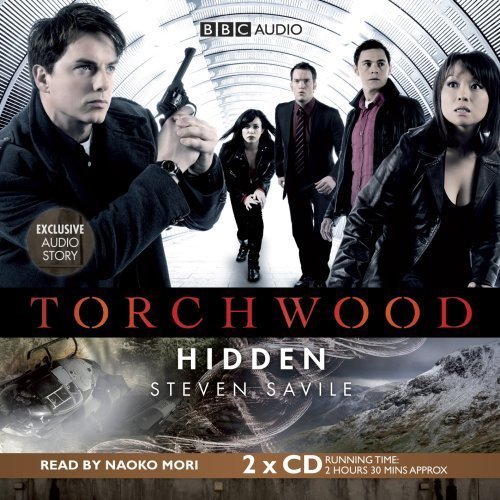 An age-old secret is at the heart of a gripping adventure for the Torchwood team in this exclusive story read by Naoko Mori outside the government, beyond the police, fighting for the future on behalf of the human race. The 21st century is when everything changes and Torchwood is ready. Led by the mysterious and enigmatic Captain Jack Harkness, Torchwood delves into the unknown and fights the impossible… After a series of violent and seemingly unrelated deaths, the solution to a riddle seems to point the finger of blame at Captain Jack. Can the Torchwood team uncover the truth, which lies hidden in the heart of the Welsh countryside, in time to save their leader?
Everyone Says Hello by Dan Abnett 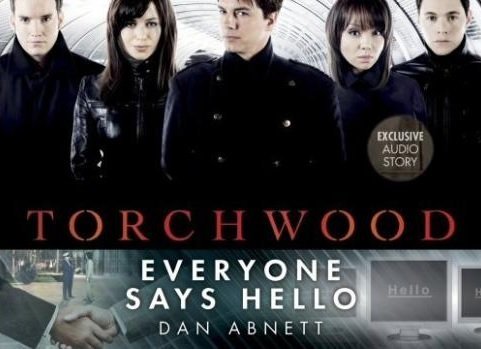 The Torchwood team is involved in a dangerous race against time in this exclusive story read by Burn Gorman outside the government, beyond the police, fighting for the future on behalf of the human race. The 21st century is when everything changes and Torchwood is ready. Led by the mysterious and enigmatic Captain Jack Harkness, Torchwood delves into the unknown and fights the impossible… Across Cardiff, ordinary people are behaving in odd ways: saying hello to complete strangers, and going out of their way to greet one another. Torchwood discovers that an alien communications field is gathering strength in the area. The team must find the device responsible and shut it off – before civil unrest engulfs the whole city.
In the Shadows by Joseph Lidster The Torchwood team are caught up in the deadly activities of a mysterious cab driver in this exclusive audio adventure read by Eve Myles. When 24-year-old Steven Ballard is found dead, the police quickly realize that this is no ordinary case – for his body is that of a man in his seventies. They call in Torchwood to investigate, and after another corpse is found, it becomes clear that something terrible is happening. Someone is sending victims to a dark dimension, to be punished by the thing they fear most. Who is the shadowy taxi driver preying on his passengers? What significance do boxes of matches play in this mystery? And can Jack ever escape from his own personal Hell?
The Sin Eaters by Brian Minchin Alien larvae in a baptismal font mark the beginnings of a terrifying adventure for the “Torchwood” team in this exclusive audio adventure, read by Gareth David-Lloyd. Searching for the source of a bizarre Rift reading, Gwen, Jack and Ianto find a corpse on the beach, his face covered in hundreds of tiny cuts. Watching from the shadows is a man in black…The Reverend Hayward thinks he has found a way to take away people’s sins. The trouble is, his special baptisms tend to take away their lives too. For the creatures he collects and puts in his church font are nightmarish parasites, feeding on their hosts’ negative emotions before consuming them. It is up to Torchwood to track them down and destroy them…
Department X by James Goss 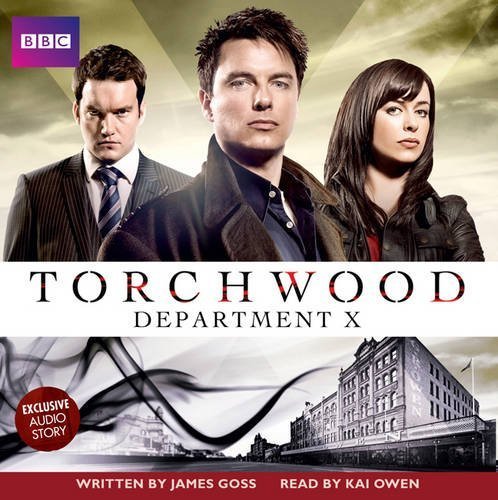 G.R. Owen is the last of Cardiff’s old department stores. Times are hard and the ancient firm has gone into administration. But who are the Administrators? What goes on behind the shutters at night? And why are customers disappearing? Torchwood are already investigating; G.R. Owen is the site of their oldest unsolved cases, and Jack is determined to solve it before the store closes forever – which is why Ianto is working undercover in gentlemen’s fashions and Gwen is in handbags. Are the new managers really aliens? What connection do they have to the mysterious G.R. Owen himself? And is Jack the only one looking for the Department of Curiosities, last seen in 1905?
Ghost Train by James Goss 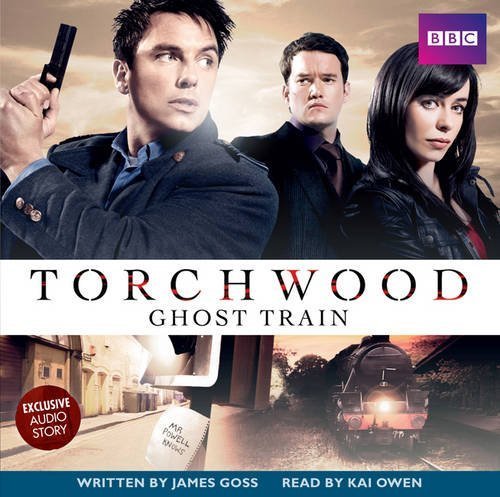 It’s not easy being Rhys Williams. You’re married to the sexiest woman in Torchwood. She saves the world for a living, you move lorries round in a timely fashion. Suddenly, you’ve got a mystery of your own. Oh, it starts off being about missing fridges. But it leads to a midnight train pulling into an abandoned platform at Cardiff Station. What is the mysterious cargo that Rhys is unloading from the train? Where’s it going? And what can be behind it? Rhys Williams is going to get to the bottom of it. All by himself, thank you very much. Soon Captain Jack is missing, his wife’s dead, and it’s up to Rhys to try and put everything right. And find those fridges…
Army of One by Ian Edginton 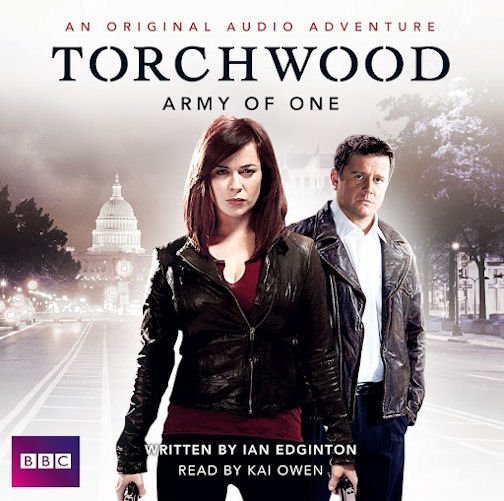 Washington D.C., post-Miracle. The city has been hit by a spate of very unusual serial killings. The victims are different ages and genders and the locations vary, but each body has one thing in common – it has been reduced to a dried-up, dessicated husk. Special Agent Lucas Avery has dealt with some tricky puzzles in his time, but this is stranger than anything he’s ever encountered. His one lead is a pair of names: ‘Gwen’ and ‘Rhys’…For Gwen Cooper and Rhys Williams, still recovering from the recent, traumatic events that shook the world, life is about to get difficult and dangerous again. For it’s not just Homeland Security on their trail, but something else – something alien, terrifying and deadly…
Fallout by David Llewellyn 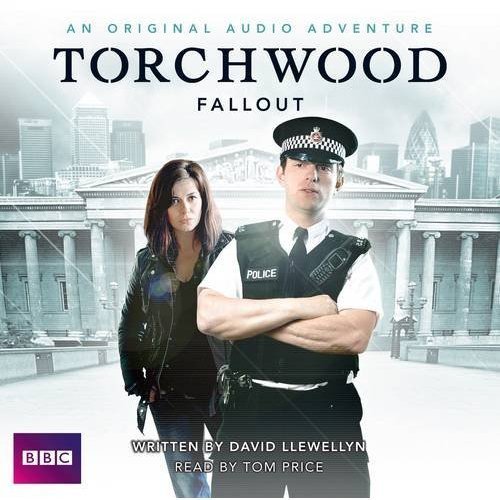 When Yasmin finds a jewelled egg in her grandfather’s shed, her first thought is to sell it. Unfortunately, the object is no valuable Faberge antique, but a dangerous weapon from another planet. Worse still, the buyer she finds online is a Russian secret agent working for the Committee for Extraterrestrial Research, who promptly swipes it, kills her brother Sayed and lands her in hospital. When Sgt Andy Davidson realises that he’s not dealing with an ordinary double shooting, he calls Gwen Cooper, who breaks the bad news about the egg and its deadly contents. With no Torchwood to help, and Gwen in America, it’s up to Andy and Yasmin to follow the trail of the ‘Shiva virus’ – all the way from Cardiff to the British Museum…
Red Skies by Joseph Lidster Jack Harness is in need of a holiday. He wants to get away from Torchwood, away from the human race – and where better to get completely away from it all than Cotter Paluni’s World, a planet surrounded by deadly scarlet lightning and cut off from the entire universe? But there are some shocks in store for Jack: the ‘Devil’s World’ might be completely isolated and inaccessible, but its inhabitants worship Torchwood. And before he can find out why, or how this is even possible, he finds himself arrested for murder. It looks as if someone on the planet knows who Jack is – and they’re out to get him..
Mr Invincible by Mark Morris Ross Chapman is one of life’s losers. So when he survives a point-blank shooting, dons a superhero costume and becomes a crime-busting vigilante, something strange is clearly going on. And Ross’ transformation isn’t the only odd thing happening in Cardiff. Time is distorting – around the city, some people are aging, dying and decomposing in a matter of minutes, while others are reverting to childhood. Sgt Andy Davidson knows he’s out of his depth – so when Jack Harkness sweeps into the police station, he’s glad of the help that only Torchwood can provide. But for Jack, the stakes are higher than ever. He’s seen a vision of Gwen, dead, murdered by an unknown gunman. And if he can’t solve the mystery of Mr Invincible, he can’t save her…
Needless to say, it’s a huge boxset, ideal for anyone looking to celebrate the show’s 10th anniversary.
The audios were released between 2008 and 2012, and I’m sure you recognise a number of Doctor Who names, including the current executive producer, Brian Minchin!
Torchwood Tales – with an approximate duration of 18 hours – is out now, priced £40 – a bargain considering each CD separately is about £10. Still, if you wait around, it should drop down below the £30 pretty soon…

by Philip Bates time to read: 6 min
Merchandise Get 15% Off Big Finish's Fourth Doctor Advent…
Merchandise Out Now: The New Adventures of Professor Bernice S…
0
%d bloggers like this: