The Quest is the Quest…
Underworld was a story that, for some reason, never resonated with me long-term. In fact, as I sat down to view it again for the first time in ages, I got quite a surprise. For some reason my brain filed Underworld under “That Story Vila From Blake’s 7 Makes An Appearance In” (which, of course, is The Sun Makers, not Underworld). I was rather pleased to realise that I was remembering the wrong story, and didn’t remember anything about Underworld which was a major bonus. It’d been so long since I’d seen this that I forgot the plot! So I delved into an old, yet new story. Hey, Old, New, Borrowed, Blue! Where have we heard that before in (relatively-) recent vintage…?
Anyway, the story starts off in the TARDIS with the Fourth Doctor and Leela in the console room, which is a scene set-up you don’t get much anymore. It’s got some amusing dialogue between K9 and Leela, and K9 and the Doctor. I always enjoyed that kind of stuff, and while some didn’t, it’s the kind of slow build that’s mostly missing from the modern show, as it’s more rushed. Anyway, the TARDIS is out at the infamous “edge of creation”, and the Doctor admires all of it, when they run into a ship, and land on it.
In the typical script, the Doctor muddles around the ship while those on board attempt to figure out exactly what the sound they heard (the TARDIS landing sound) was. This is an interesting preview of the episode, as we find out later on that the folks on the ship are Minyans, a race that was well known to the Doctor. This was the race that the Time Lords interfered with way way back, and the problems that came from that caused their policy of non intervention. So I was thinking “Oooh – a Time Lord backstory”. I love stories that have something to do with Time Lords, so this little factoid was a cool one. The Minyans themselves view the Time Lords as Gods, which set up an interesting dynamic between the Doctor and those on the ships. 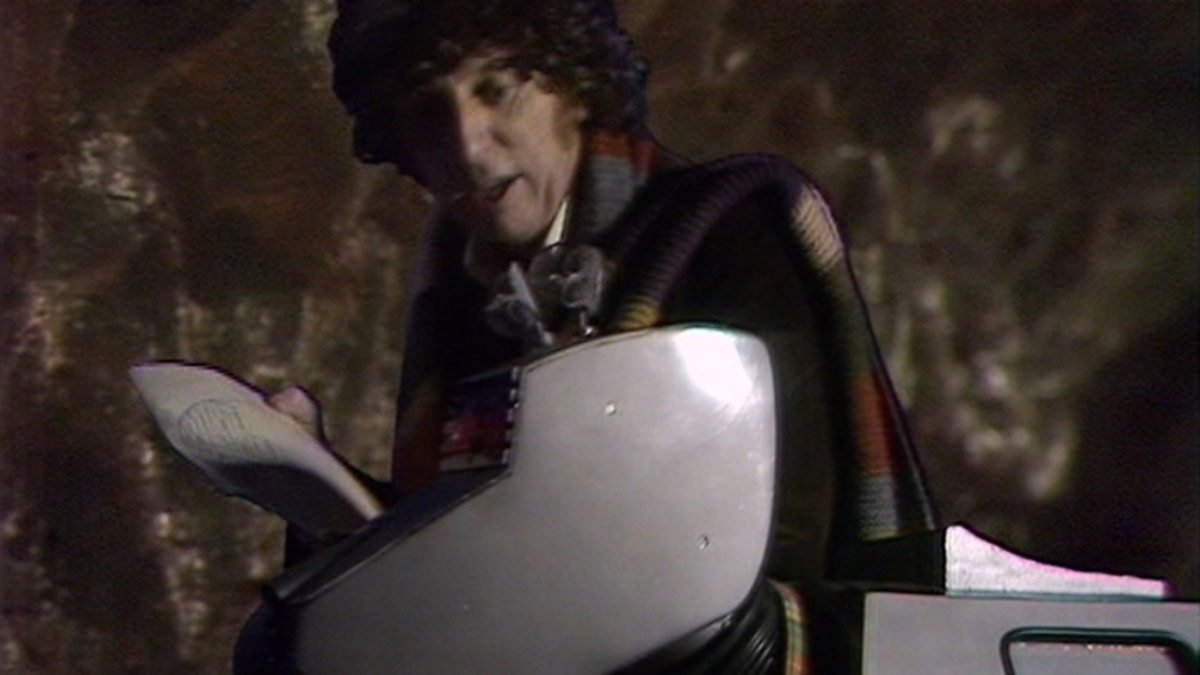 The Doctor eventually meets the people on the ship, and of course there’s the one guy in the crew that’s all angry about the situation and is in conflict with the guy running the ship – a common trait in Doctor Who. We do find out that the people on the ship have the capability of “regeneration”, but it doesn’t appear to be the same as a Time Lord, as when we see it, the woman just gets younger, not getting a new body as such. Which made me wonder why these people have regenerative tech? It’s those kind of small hooks that make me enjoy stories like this.
Anyway, the ship was looking for something called the P7E. With K9’s help, they found what they believed to be it, and went looking for it. At this point, the Doctor takes a tact we’ve seen in other incarnations: that of just sitting there, looking smug, and watching the people around him get into trouble. David Tennant’s Doctor did that when (not Jack’s) Torchwood wanted to open up a Ghost Shift, and the Doctor was quite content to let them get into trouble, quite literally sitting in a chair. That is what the Fourth Doctor does here too, leading into the Episode One cliffhanger. Although, since his TARDIS is onboard, they’re not really in trouble.
Once out, they find what they were searching for: the Quest and all that. But what they find isn’t quite what they were looking for. First, there is no answer, and the implication is they’re looking for a ship, and not a planet, which is what they found – and crashed into. The planet is inhabited, but not on the surface. The planet was soft, and they’re wandering around on the core, the Underworld. The ships crew go off on their quest, and the Doctor and Leela are left on their own, so try do some exploring in the Underworld themselves.
It’s here where parts of the story drag for me. A lot of it is traditional tunnel chase Doctor Who type stuff. Avoid the guards, find the guy on the run from the guards, make friends with him, etc… On top of that, a lot of the Underworld bits suffer greatly from the fact that there’s no scenery as such; it’s all CSO. This is examined in the documentaries on the DVD (released on its own in the USA, but part of the Myths & Legends boxset in the UK), but it shows greatly when people are running along, and they do not look like they are actually there. I’m immediately reminded of the tunnels in The Talons of Weng-Chiang, which looked fabulous. These do NOT. Again, it’s a by-product of the crew running out of money at this point in the season, but it took me out of a lot of bits. Which is odd, as all the scenes inside the Doctor’s body in The Invisible Enemy used the same visual effect. But I guess that story was fairly fantastical; I bought it there. 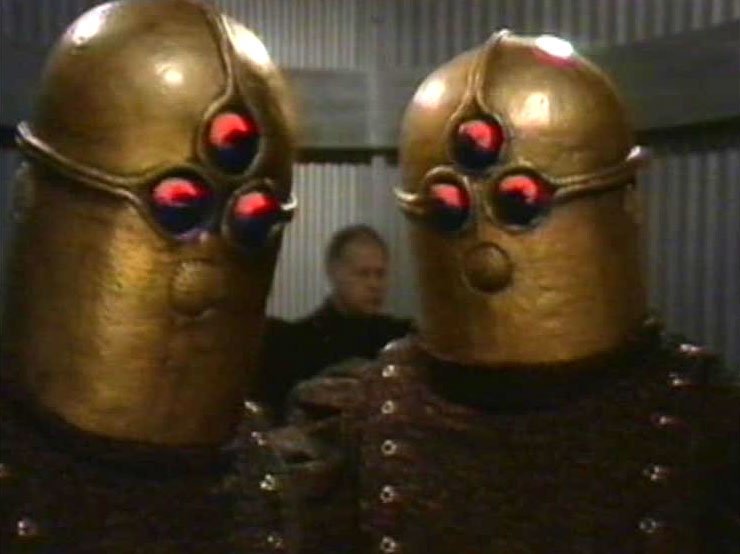 Things don’t really get interesting again until the middle of Episode Three. The Doctor, Leela, and Idas are headed towards what one assumes is the other ship where some guards are subjugating “slaves”, in another traditional Doctor Who plot point. What is interesting is that the place a sacrifice is to be taken place at looks exactly like the command deck of the first ship that was the quest.
At this point, the “What’s the connection with regeneration and Time Lords” is mostly set aside – not much is made of it – as it becomes a “storm the castle” Doctor Who story from this point out. I was disappointed not more was made of the Time Lord connection. It seemed it would be early on, but mostly it was not addressed after that, and that was a let down.
Underworld was based loosely off the Jason and the Argonauts story. Some of the similarities are the ship they’re looking for (P7E vs. Persophone), and some of the character names (Jackson/Jason & Orphe/Orpheus). If you don’t know the story (I did not), that was lost on the viewer, but a lot is made of that in the extras on the DVD.
Overall it was an enjoyable story, even though it was somewhat predictable. I liked it most before they got into the titular Underworld, as it felt like a standard tunnel chase, with nothing special going on. Still, I’d recommend it, and it’s certainly worth a reevaluation –  but maybe leave it until you can’t quite remember what the plot is first!

(Adapted from an article originally published on Kasterborous in October 2010.)

by Joe Siegler time to read: 5 min
Features Evolution of the Cybermen: Then and Now
Features Why You Should Watch Robin Of Sherwood (Even Thoug…
1
%d bloggers like this: