Suffice to say, if you’re heading to the New York Comic Con from 6th- 9th October, we’re very jealous. Aside from a whole host of Doctor Who stars, Titan Comics will have a big presence at the event.
On Friday 7th October, at the NYCC Live Stage at 11:15am, creators from the entire Titan’s Doctor Who line take part in a live stream interview, so you can get the lowdown on the comic adventures of Doctors Three, Nine, Ten, Eleven, and Twelve. This includes editor, Andrew James; writers, Paul Cornell (The Third Doctor; Father’s Day) and Nick Abadzis (The Tenth Doctor); and artists, Simon Fraser (The Eleventh Doctor) and Rachael Stott (The Twelfth Doctor).
They’ll also all be involved in Titan’s Doctor Who panel, held on Saturday 6th October at 7:45pm in Room 1A21, alongside Third Doctor artist, Chris Jones. The team will reveal more about the range’s 2017 offerings, presumably including “Year Three” launches for the core titles (already announced for The Eleventh Doctor). All attendees will receive a free goodie bag bundle of Ninth, Tenth, Eleventh, and Twelfth Doctor comics, as well as the 2015 convention one-shot. 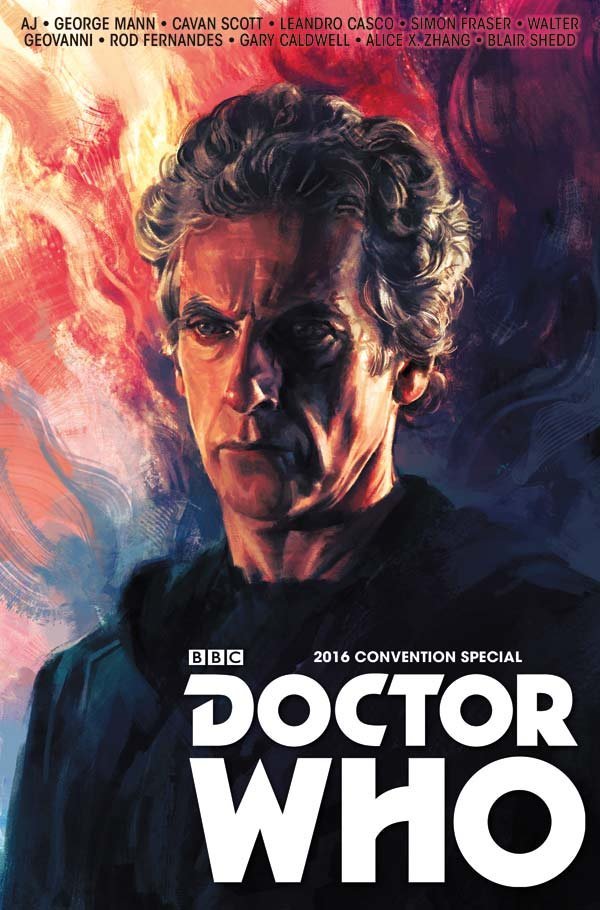 From 3:30pm on Friday, you can head over to Titan’s booth #2142 to meet Abadzis, Stott, Mariano Laclaustra, and Alice X. Zhang, while starting at 1pm on Saturday, Cornell, Jones, and Fraser will be signing comics.
And that’s not all. The Doctor Who 2016 Convention Special comic features an all-new tale, The Long Con, starring the Tenth, Eleventh, and Twelfth Doctors! With art by Leandro Casco, Simon Fraser, and Walter Geovanni, this convention special comic comes with two collectable (stunning) covers by Fraser and Zhang. The special also includes all nine Supremacy of the Cybermen back-up strips (from the First Doctor to the War Doctor), written by George Mann and Cavan Scott, and drawn by an array of talent including Dan Boultwood, Mike Collins, Simon Myers, Andrew Pepoy, Blair Shedd, Lee Sullivan, and many more.
That comic is available from the Titan booth, or if you can’t make it to New York, it’s available for pre-order from Forbidden Planet.
Are you lucky enough to be going to the NYCC…?