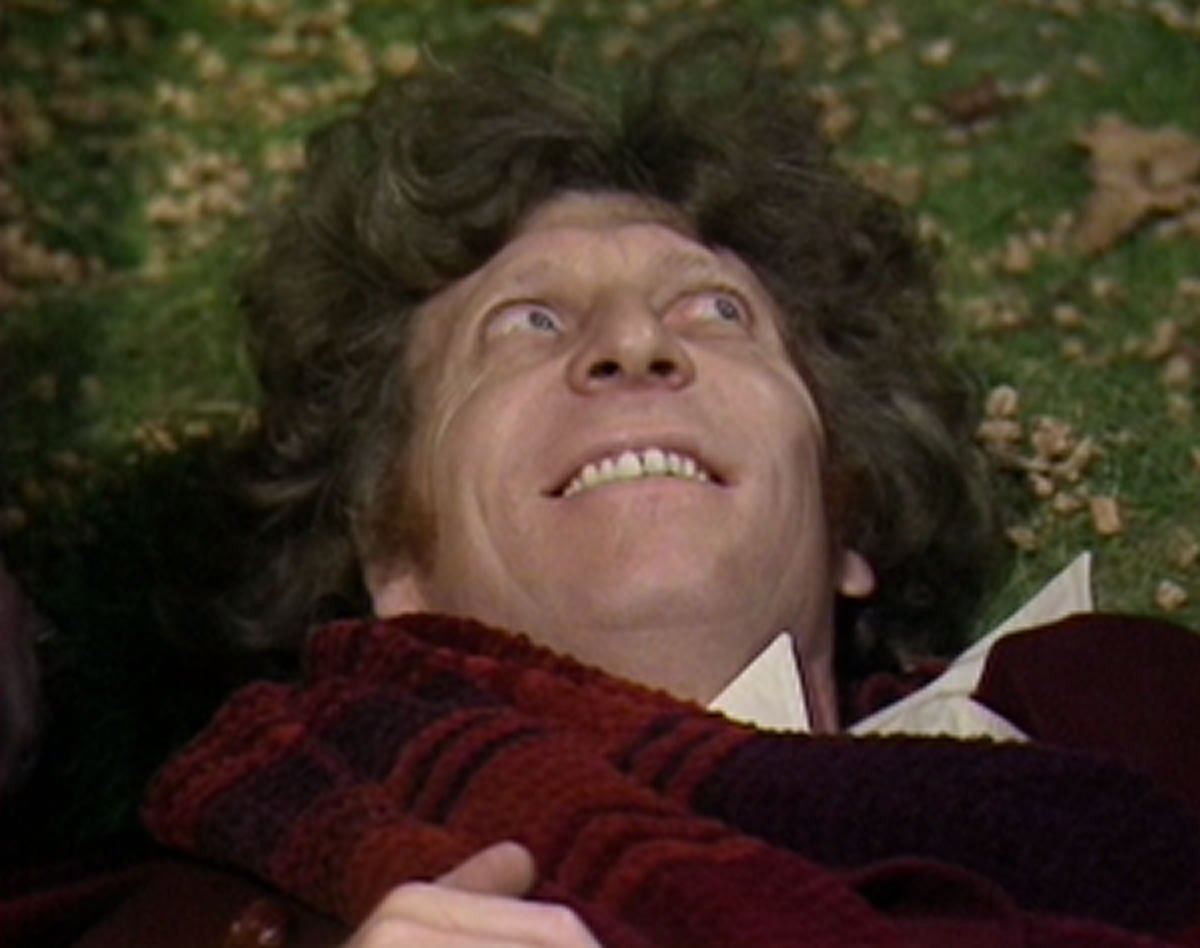 When he was six, my second son was obsessed with Doctor Who. Conversations were laundry lists of statistics and numbers. How many stories had the Seventh Doctor done? How many had the Daleks? Which Second Doctor stories were missing? He reeled off facts and figures with a dexterity that astounded me and fired out the questions with such rapidity that I struggled to keep up. It was like the end of The Eye of the Scorpion, in which the Fifth Doctor ultimately defeats a great evil by asking it questions until it explodes.

But regeneration was his favourite topic. I had the YouTube montage on speed dial. He knew the ins and outs and reasons behind every single one of them – with one obvious exception, although we used to say “Fell off his exercise bike” whenever we got to the Sixth Doctor – and he’d tell anyone who listened. We picked our favourites and did impersonations. Most of the family thought we were mad. This is basically a long-winded way of telling you that I was intimately familiar with every nuance of the Fourth Doctor’s regeneration long before I actually got round to seeing Logopolis.

Logopolis is a good story, although it could have been a great one. Part of the problem is Tegan, who seems awkwardly shoehorned into the narrative. On the other hand she lends it some much-needed humanity, something the story (which is about two time-travelling aliens who visit a planet run by aliens, where they meet up with another alien who’s been duped by a villainous alien, masquerading as a different alien) would otherwise lack. It’s not that off-world stories with, say, Romana don’t work. It’s just you need to dump a few colonists in there, and not just in the final few minutes.

The Fourth Doctor’s swansong is half mathematical, half metaphysical. The universe, we learn, is built entirely on numbers (it is thus the perfect story for Adric, whom we will deal with later) and, thanks to the Master, is in danger of collapse. There is a long conversation about the exterior dimensions of the TARDIS (this is before it shrinks, thanks to the Master’s tissue compression fetish). Elsewhere the Doctor is being tracked by a mysterious figure in white who turns out to be… well, connected in some way, although it’s impossible to be really sure quite how. And one of the finest Doctors of them all, ‘a hideously crumpled shape on the ground’, as Christopher Bidmead’s novelisation puts it, finally bows out – but not before allowing himself the luxury of one final, beautifully self-indulgent grin.

And yet everyone remembers this scene because of the plaster of Paris. Or whatever it is. It looks like he’s had a facial. There is Davison’s inexplicable grin (I never knew that regeneration was so pleasant) as he becomes tangible. There is the moment when the Watcher walks across the set towards Baker’s outstretched hand, ready to merge, even as Nyssa exclaims “He was the Doctor all the time!”. (It’s curious that the novelisation has her emphasise the word ‘was’, as if muttering “I told you so”. At least that’s the way I interpret it, although I’ll never know if I was right.)

Why use the Watcher in the first place? Superficially, his presence doesn’t make any sense. At first he seems to be the physical embodiment of entropy; a manifestation of death who is greeted like an old friend by a Doctor saddled with the increasing awareness that his time may be up. When Baker is observed sitting on Brighton beach at the beginning of The Leisure Hive, it’s hard not to imagine some sort of inner rumination about the time he’s spent with teeth and curls: with occasional anomalous exceptions (State of Decay), Season 18 is unremittingly gloomy, the Doctor set in his role of the reluctant tour guide. It’s largely the influence of John Nathan-Turner, but it also seems inevitable: perhaps, after nearly seven years in the role, Baker has simply run out of moods.

But still. The Watcher’s a strange kettle of fish, deviating between passive observance and direct intervention (being the one who brings Nyssa to Logopolis, and later piloting the TARDIS on the Doctor’s instruction). He is at once corporeal and ethereal according to where the story is going. Even his name (or lack thereof) is consistent with a host of anonymous characters: policemen, security guards, and the Monitor. Throw in the Doctor and the Master and you only need one more definite article to get a set of steak knives.

That the Watcher turns out to be the Doctor himself is a welcome twist and one that plays host to a trunk full of fan theory. Is he there because time’s gone wibbly wobbly and the future is in flux? Is he a potential future incarnation of the Doctor, snatched from the ether and made flesh, in the same way as the Valeyard? Is time folding in on itself? Does the Doctor – while dangling from the telescope – project his mental energy into some corporeal form in order to survive a fall that would otherwise kill him? Or does every Time Lord have a Watcher, and if so, did John Simm’s eyes pop when he realised he was about to turn into Michelle Gomez? And if the Logopolis production team had cast Peter Davison in full make-up, would that have made things better or worse? The books and audio dramas have speculated. But much like the Valeyard, the Watcher becomes less interesting the more you do with him. Existing as pure concept, he is as enigmatic as the Doctor’s prosecutor is evil incarnate – a Rorschach of 1980s Who for fans to interpret exactly as they like. That’s fine until interpretation becomes canon. The the more you add strokes to an inkblot in order to solidify its image, the messier it becomes: so it is with the Watcher, who is at his best when he’s no more than abstract, allowing the audience to make up its own mind. He’s a singular anomaly – the result of a space-time distortion – or he’s the backstage part of regeneration that we’re allowed, just for once, to observe from the wings; more likely he’s a writer’s whim, used simply because Bidmead (who also wrote Castrovalva, which should tell you all you need to know) felt like putting him in there.

Besides, anyone who claims that the Watcher doesn’t fit with the other regenerations is entirely missing the point: the regeneration process didn’t stabilise until 2007 and even then Moffat undid it all at the end of The Time of the Doctor (when the Eleventh Doctor effectively sneezes himself into the body of his successor). It was Davies who introduced the notion of regenerative energy, for better or worse – I don’t think we need to really argue the toss over that one – but regenerations have always been the product of contemporary technical wizardry and the depth of the writer’s imagination, within an increasingly confining set of guidelines. Nonetheless, the only thing that is really consistent about the whole thing is that it isn’t consistent at all – that, and the fact that, rather like the development of approaches to labour and childbirth, it need no longer occur lying down.

There is a commonly-held theory that necessity is the mother of regeneration – in other words, we get the Doctor we need. Hence Pertwee’s suave cavalier – both part of the establishment and vehemently opposed to its principles – is the only one who could have managed at UNIT; conversely it took a transition to the Fourth Doctor to grant him the wanderlust he needed to move off planet for good. Ten years down the line, the hardened, irrational Sixth Doctor is a by-product of a stressful, dangerous renewal, the character he needs to become in order to survive such a process – while his immediate successor is quieter and more considered, even if the question mark jersey is not. I wish I could believe this theory, but it doesn’t hold water. Because it doesn’t explain why we’d go from a Doctor who managed to handle Adric reasonably well to one who seemingly can’t handle him at all. Age is a big part of it: Baker’s Doctor is naturally more like a father figure, whereas Davison is more of an older brother, precisely the kind of surrogate that Adric really doesn’t need. The irony is that in the last two stories of the Fourth Doctor’s run – once Romana’s been dumped in E-Space – the chemistry between Baker and Waterhouse really is quite good, and it would have been interesting to see another series with the two of them. Unfortunately, Nyssa and Tegan show up almost immediately, Adric undergoes a personality transplant (or at least a facelift), and it’s all downhill from there.

There are those for whom the Fourth Doctor’s departure marks the end of an era, and the beginning of a slow and steady decline towards inevitable cancellation. But I’m not here to rehash the whole ‘Doctor Who was rubbish in the ’80s’ argument. I was watching it in the ’80s and that’s not how I remember it. Perhaps it’s patchier than it used to be, certainly from 1985-1987; nonetheless, the whole ‘sins of JNT’ maxim does a disservice to Earthshock, Varos, Mindwarp, Enlightenment, Fenric, and Androzani; if I’ve missed out your favourite it’s nothing personal. Simultaneously, one might argue that in many respects things were never quite as good again, at least not until 1988.

Irrespective of subjective patchiness, one thing that’s not up for debate is the launch of the crowded TARDIS era which is about to follow – something that would never have happened during the Fourth Doctor’s run, given that its lead actor would quite happily have carried the show with no companions at all, had he been granted the opportunity (although if the rambling at the beginning of Deadly Assassin is anything to go by, perhaps it’s best that he wasn’t). It’s interesting that three companions should feel excessive when it was par for the course in the 1960s; perhaps story length or the Doctor’s relative usefulness played a part in that, or perhaps it’s that the single companion story was such a Seventies staple (try saying that when you’re chewing on a jelly baby), but it’s another debate. Whatever the truth, it’s all there in that final tableau: three companions surrounding a dying Time Lord, destined to spend the next few months scrabbling around the TARDIS looking for something to do, while Adric over-eats, Tegan whines about broken clocks, and Nyssa tries to keep the peace once the headaches have worn off.

And perhaps that’s why Baker’s grinning. He knows what’s coming next, and that he won’t be around to have to endure it.

A Watcher’s Point Of Vie… Features A Beginner’s Guide to Regeneration 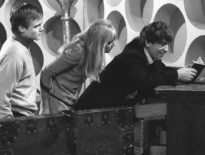 Features From The Tenth Planet to The Power of the Daleks: …
4