White Noise: Whistle and I'll Come To You Revisited

Warning: this article contains spoilers.
A few years back, I read a comment on a YouTube video that has stuck with me ever since. “Watch the early episodes of Scooby Doo,” it said. “You will find them dark and unremittingly bleak. It’s a run-down, almost post-apocalyptic near future where there aren’t that many people, there’s economic depression everywhere you look, and where everyone is superstitious and jumpy and thinks that monsters are lurking round every corner.”
Certainly if you go back to those first few series that’s the impression you get. There are abandoned lighthouses, spooky castles with moving suits of armour and portraits that follow you round the room, and at least half a dozen dilapidated amusement parks. There are also plenty of empty hotels, most of which contain at least one socially inept janitor draped in a sheet, who forgets that he isn’t actually a ghost when Shaggy appears dressed as a waiter and carrying an enormous sandwich. Nonetheless, the sense of isolation bleeds through the comedy, even at the end of each episode – as our gang drives off into the sunset, knowing that their van is shortly destined to break down miles from the nearest town but conveniently close to that creepy-looking farmhouse.

But there’s nothing like a good ghost story for a cold winter’s night, and one of my personal favourites happens to star John Hurt. It is a fresh adaptation of medieval historian M.R. James’ short story about (in the words of Jonathan Miller) ‘the dangers of intellectual pride’. Visiting the windswept Suffolk coast, an arrogant, strictly existential archaeology professor stumbles across a mysterious whistle that apparently summons the dead, causing him to re-appraise his view of humanity – and reducing him, in the story’s final scenes, to a gibbering wreck.
The aforementioned Miller was responsible for the first televised version, filmed for Omnibus in 1968, and starring Sir Michael Hordern as Professor Parkin – now recast as a mumbling, flat-capped eccentric in the sort of move that typically annoys fans of the original story. For all the liberties taken by Omnibus, James’s narrative is, to all intents and purposes, intact: Parkin finds the whistle, waxes lyrical about the fanciful notion of the afterlife, and is then terrified by a sheet. While his ultimate fate is left entirely to the viewer to decide, James makes it clear in his source text that “the Professor’s views on certain points are less clear cut than they used to be. His nerves, too, have suffered: he cannot even now see a surplice hanging on a door quite unmoved, and the spectacle of a scarecrow in a field late on a winter afternoon has cost him more than one sleepless night.” 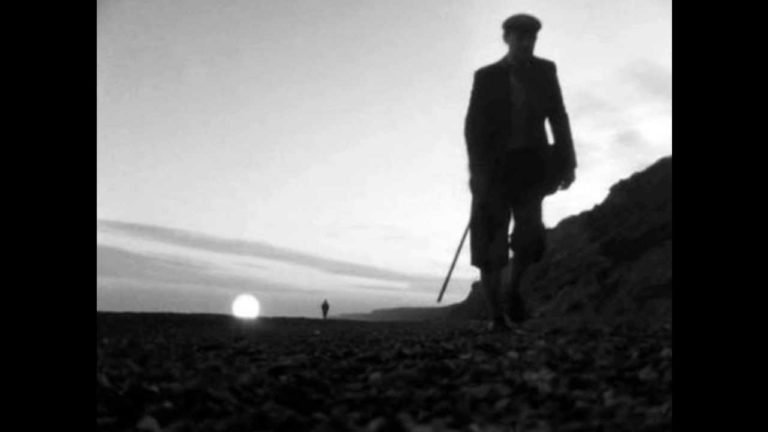 It’s curious that the contemporary version, written by Neil Cross (Hide), dispenses with the whistle entirely. Instead, Parkin (Hurt) discovers a mysterious ring embedded in the sand – following Tolkien and Twin Peaks – and it is this that ultimately brings about the series of unfortunate events that make up the latter two thirds of the running time. Finding himself suddenly encumbered by nocturnal disturbances, frightening dreams, and mysterious figures on the beach, Parkin divides his time between getting in and out of bed and wallowing in guilt over his absent wife: he might even manage to get some peace of mind, if he can only get that statue to stay facing the right way.
Stylistically, the two have much in common. Miller’s documentary-esque approach is gone by the time we get to 2010, but Andy de Emmony is sensible enough to keep his shots long and thoughtful and his score the most minimalist kind of dark ambience, although it still seems loud after after the near silence of the 1968 version. The camera pans out from Hurt’s quizzical, chiselled features, staring off at something just behind the fourth wall that we can’t quite see, or lingers just below Hordern’s, calling to mind a small child watching the puzzling behaviour of an adult that they do not quite understand. But what pervades throughout is a sense of isolated drudgery – the coast and hotel (certainly the one in which Hurt resides) are eerily quiet; washing, dressing and unpacking are all conducted in a gloomy silence; and both films contain numerous scenes of characters eating and drinking and taking no apparent pleasure in doing so. 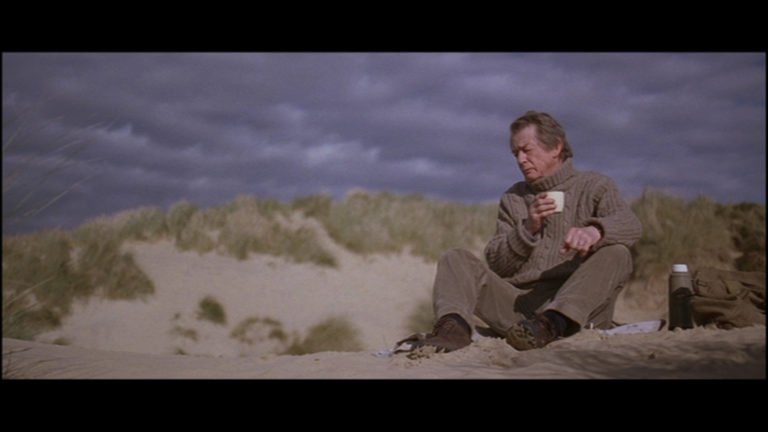 The greatest difference, aside from the fleshed-out narrative, is the way in which both versions choose to present their protagonist. Hordern’s Parkin is socially awkward – the word ‘autistic’ has been used more than once, although I’m not entirely sure that’s accurate – whether he is quietly repeating words he likes in the manner of a toddler playing with language; hopping over sand dunes and down grassy slopes like a hyperactive schoolboy; awkwardly shuffling into the dining room in evening dress, holding both hands over his crotch in the manner of a teenager hiding an erection.
Hurt’s Parkin, to contrast, is academic to a fault, but seldom less than personable – demonstrating, indeed, an astonishing level of patience when confronted with faulty lights, locked doors, and rats in the walls. This is a man who is keen to stay grounded because it suits his worldview – and, indeed, a man who has found his worldview irrevocably shaped by his marriage. “I’ve never seen a ghost,” Parkin says, late in the drama, in the one scene where he comes even close to losing his rag, “so my empirical evidence is zero. But what I have seen is the opposite: a body that has outlasted the existence of the personality, and that is far, far more horrifying than any spook or ghoul you could ever hope to glimpse”.
Canvassing general opinion, I’ve come to the conclusion that if you’ve seen the original, Cross’ adaptation is probably going to come as something of a disappointment. Gone is the self-righteous stuffiness that is the lynchpin of Parkin’s demeanour: this is a man who has suffered, who is both in the world and of the world, and who has watched the person he loved most become a stranger. The lesson he learns is harsh and sudden and ultimately fatal, and while the heavily ambiguous closing shot hints at something resembling a happy ending, it is hard not to lament Parkin’s final suffering as unnecessarily cruel. To contrast, it is hard not to find a certain dramatic satisfaction in the now-iconic image of Hordern’s Parkin, hunched and wild-eyed in the corner of the room, sucking his thumb like a toddler, murmuring “Oh, no! Oh no! Oh no! Oh no!”. 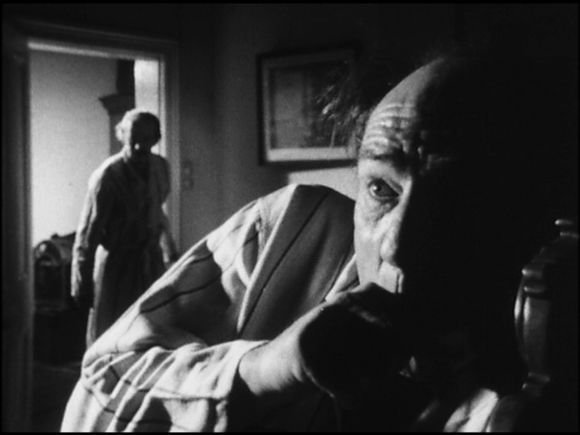 Whistle and I’ll Come To You 1968 is a minimalist ghost story about the folly of academic assumption – something that many people today could do with learning from (the man’s blase arrogance mirrors many conversations I’ve had online; when Parkin rewords Shakespeare, you know he’s heading for a fall). Whistle 2010 is a story about an old man who dies of a heart attack when he sees a pair of hands creeping under his bedroom door. It is, if you like, rather dumbed down – the changes apparently needless, irrespective of whatever social commentary Neil Cross may have decided to impart.
But here’s the thing: it terrified us. And generally things don’t. Gore is another matter. Emily, my wife, has a thing about faces, and I’ll leave the room when the surgeon’s knives come out three quarters of the way through Holby. But horror – pure horror – has to try much harder to leave a lasting impression, and it is the fact that it did that elevates it above many other similar exercises in scares and chills, whatever flaws it may possess.
Postscript. It’s 2011. Emily and I are lying in bed, the January wind howling, the battery-operated mood lighting the room’s sole source of illumination. We’re talking about it again, having watched it a couple of nights previously – and found it to be a story that has given us restless nights and the uneasy sleep of those who have seen things that made them uncomfortable.
“There were just lots of noises,” she said, when I asked her why it had affected her so much. “And nasty things happening. And I couldn’t understand it!” And I suppose we fear what we do not understand, and that which is unexplained. It’s human nature to fill the vacuum created from an absence of meaning, but it is sometimes the act of filling it that creates new and fresh horrors, far more potent than can be dreamed of in your philosophy. In the meantime, I managed to spook my wife by scratching on the side of the bed, and crawling across it towards her, bellowing “I’M STILL HERE!” “I looked it up, and there seem to be a couple of theories,” I was telling her. “One is that the whole thing was psychosomatic. The other is that she was haunting him because he believed she was nothing more than an Alzheimer’s-ridden shell. But I don’t know.
“Something strange, though. You remember the ugly bust they had in the bedroom? Apparently, Neil Cross, the writer, was staying in a hotel in Devon, probably for research or something. And that same bust was in his room and he remembered it looking inappropriately creepy for hotel decor and that probably fuelled the creative process. Later on, when they were assembling the set in the Surrey mansion they were using, he realised it would look good in John Hurt’s room so he contacted the hotel, and asked if they could borrow it. And apparently… it never existed. He showed them photos, and they said yes, it’s our hotel and it’s our room, but this bust was never here.”
Emily says nothing.
“So they had a replica made, because he could remember what it looked like, but the original just wasn’t there. Creepy stuff, isn’t it? Anyway, goodnight.”
“Sh*thead.”

White Noise: Whistle and I'll Come To You Revisited