It’s the end of Missing Episodes Week, so let’s talk about something a little different for the finale.
1964’s Planet of Giants is a noteworthy story for multiple reasons: it was the opener for Season 2, the first story set in contemporary Earth since An Unearthly Child, introduced long running composer Dudley Simpson and frequent director Douglas Camfield, as well as, for 21 years held the unique distinction of being Doctor Who‘s only 3 part story, up until 1985’s The Two Doctors.
“A 3-parter? In ’60s Who? Get this liar out of my face!” I hear you cry, but it’s true! Although it wasn’t always meant to be the case…
The writer of this story, Louis Marks – who also went on to write Day of the Daleks (1972), Planet of Evil (1975), and The Masque of Mandragora (1976) – originally scripted the usual four episodes expected of your average serial, and all these episodes were filmed as normal. At the request of Donald Wilson, Head of Serials at the BBC, Parts Three and Four were combined into a single episode, leaving 25 minutes of footage on the cutting room floor and effectively making Doctor Who‘s first missing episode. 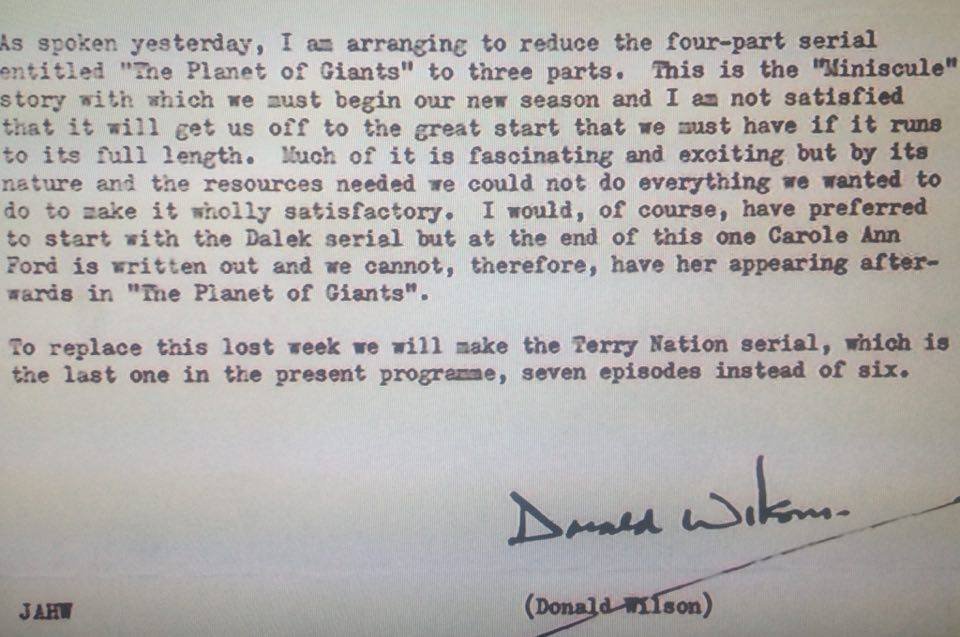 But that’s not where the story ends! Let’s cut ahead 47 years to 2011, and the production of the 2012 DVD release of the serial. Normally, for DVD releases of classic stories, a behind the scenes featurette is made which includes a plethora of interviews with surviving cast and crew members. Unfortunately, for Planet of Giants, it seemed creating behind the scenes materials would be a tad harder than normal, given how the director, writer, and entire guest cast had passed away.
This left Ed Stradling, producer of documentaries for the DVDs, at a bit of a loss. This is until he and Ian Levine hatched an idea: while the vast majority of the cast may have passed away, Carole Ann Ford and William Russell are still actively reprising their roles as Susan Foreman and Ian Chesterton over at Big Finish. If they hired some soundalikes, and reused some old footage, they could redo the original unedited Episode 3, Crisis and Episode 4, The Urge to Live!
Katherine Mount was hired as Barbara Wright, and impersonator John Guilor was hired as the Doctor (some eagle-eared listeners will recognise John Guilor’s return as the First Doctor in The Day of the Doctor).

So how does Planet of Giants fare as a four-parter? Is it better than its original 75-minute version? Well, as interesting as I found the reconstruction of this story, I think I agree with Donald Wilson’s decision to condense the episode.
Some elements of the story are more fleshed out, such as Forester and Smithers’ sudden alliance in the face of the murdered Farrow, as Forester starts to piece together the fact that he’s been lied to. That and there’s a certain character’s death that’s left out of the final serial (animal fans may want to stick to the original version).
But the rest of the re-inserted story just seemed to me as aimless narrative dawdling (almost like it was edited out for a reason). There’s only so many phone calls I can take where Smithers pretends to be Farrow as telephone operator Hilda desperately tries to convince her husband that Farrow sounds nothing like he normally does. Just when you think that’d be the last phone call, they call each other again. Let’s not even mention that scene where the Doctor gets Ian, Barbara, and Susan to stand on a giant notepad and describe to him in excruciating detail the shape of a chemical equation so he can reconstruct the shape for himself.
All in all, while I commend the time and effort that Ed Stradling and Ian Levine went into producing this special edition of Planet of Giants, personally for future watchings I’m going to stick to the three episode version. That being said, after looking online, while I’ve found people like me who prefer the original 3-part story, I’ve also found fans who much prefer the 4-part extended version. It’s almost like taste is subjective. Who knew, eh?
So, have you seen Planet of Giants? What about the special edition? Which version do you prefer? Let us know!

by David Power time to read: 3 min
Features Why Doctor Who Fandom Is Wrong About Christopher E… 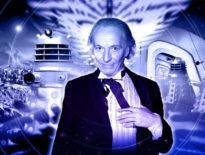