Candy Jar Books have released the fabulous final artwork for the cover of The Life of Evans, the upcoming Lethbridge-Stewart novel.
Embracing a hand drawn style and wearing its Drew Struzan influence on it’s…well, it’s cover, the artwork by Richard Young is certainly impressive. 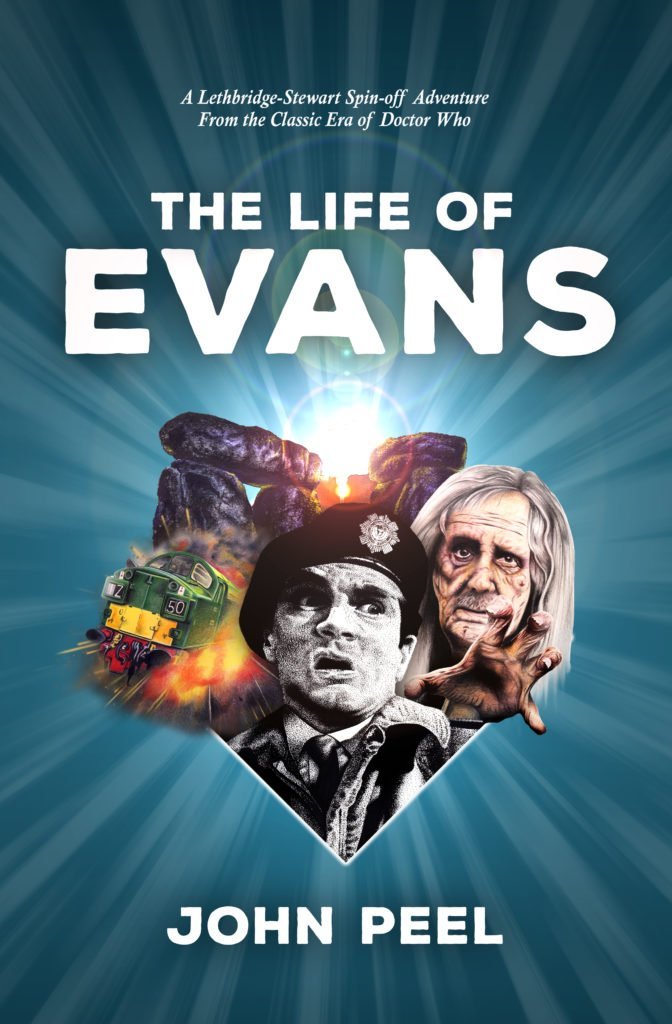 Deciding to give each novel its own distinctive look, Range Editor Andy Frankham-Allen said:
“The main range evolved into a circular motif, so for the novellas we thought we could do something slightly different. Diamond shapes are a standard element of classic Doctor Who, notably the logo used from 1974 to 1979, and it seemed an obvious thing to echo here.”
The artist himself, Richard Young adds:
“Once we’d fixed on the idea, I started work on the individual elements for the composition. Candy Jar prefers the artwork for the covers to be submitted as separate elements, rather than a single completed piece of artwork. I’m sure Drew Struzan has never done this, but it does allow for a greater flexibility when I am creating elements individually, or as a whole. So this cover is actually made up of several illustrations; Evans, the train and explosion, the standing stones, the sunset, the old man, and finally his hand.”
It certainly looks the part for the curious life of Private Gwynfor Evans.
Reassigned by Brigadier Lethbridge-Stewart to a whole new training programme under the watchful eye of Captain Younghusband in Imber, things seemed to be working out for the troublesome private. However, things soon take a sinister turn when Evans finds himself the prisoner of a strange alien intelligence. At the spearhead of a new invasion, Evans suddenly finds himself as the very frightened focal point for a race that seem oddly curious about the life of Evans…
Also, included with The Life of Evans, by John Peel, is a bonus short story by Robert Mammone, called Time and Again. The story serves as a sequel to the 1985 Doctor Who television serial Timelash, and is a prequel to the forthcoming spin-off series, Travers & Wells, revealing more of the mystery that was first seen at the end of the novel, Times Squared. Travers & Wells will be a new novella series, echoing the novellas of H.G. Wells, such as The War of the Worlds.
The Life of Evans is available for pre-order now, for £12.99 (+ p&p), and will be which published in hardback, with a strict print-run of only 400 copies. You can pre-order individually or as part of the discounted novella UK bundle for only £38.40, saving £9.57, or an international bundle for only £55.59, saving £7.40.

by Andrew Reynolds time to read: 2 min
News Steven Moffat Reveals the Advice He Gave New Showr…
News Humble Bundle: Get Doctor Who Audiobooks for As Li…
0
%d bloggers like this: