First up, I have to admit I haven’t actually read a Doctor Who comic for probably 15 years. I used to love comics; it just sort of fell out of my attention. So when I heard it was Comics week on DWC, my first thought was to dig out some old issues of Doctor Who Classic Comics and wallow in nostalgia…
In retrospect, I am really pleased that Philip (the clever editor) suggested instead that I could review Doctor Who: The Third Doctor Miniseries from Titan Comics. Because it’s a fantastic adventure, brilliantly scripted by new Who and novel writer, Paul Cornell.
I don’t know how to compare it to other Titan adventures (I haven’t read them) and it may be that I’m just re-finding a lost love of comics, but I enjoyed The Heralds of Destruction tremendously. At one point, part way through reading an issue late night in bed, my wife asked to switch the lights out. So I waited a bit and read the rest under the covers (the light of my iPad in lieu of a torch).
And that’s a good metaphor for Heralds as a whole: it is such a fine and accurate recreation of the Third Doctor’s era, cast in a modern new light. The adventure occurs directly after the events of The Three Doctors. Our favourite Time Lord has been granted his freedom back, but has yet to set off on new adventures across time and space… For Jo Grant, this is an uncertain time; will her beloved friend take off without her? Will he ever be seen again? What Paul Cornell does is give us a fully-formed Third Doctor world, matched by perfectly through evocative illustrations by Christopher Jones, but with a broader emotional depth and richer characterisation.
We get inside Doctor Three’s head in a much more fully realised way than was ever afforded on TV, exploring the effect exile to one planet and one time has had on the eternal wanderer. Jo and Captain Yate’s relationship, barely touched on on-screen, is also explored meaningfully within these pages.
Cornell also injects a great deal of foreshadowing of what’s to come, with hints of Yate’s future betrayal and breakdown, the Doctor’s imminent regeneration, and his ‘greed’ that leads him to lose his third incarnation.
Plus we also get another great encounter between Pertwee’s Doctor and Delgado’s Master, possibly the ultimate hero/villain combination in the show’s history. All credit to Big Finish for bringing back the Third Doctor in a series of audio adventures, but Titan has a bigger arsenal of characters to call upon, not just the usual UNIT regulars, but the likes of Corporal Bell and Sgt Osgood too. In a nod to the possible parentage of the new Who scientist Osgood, at one point the Sergeant is seen to use an inhaler. 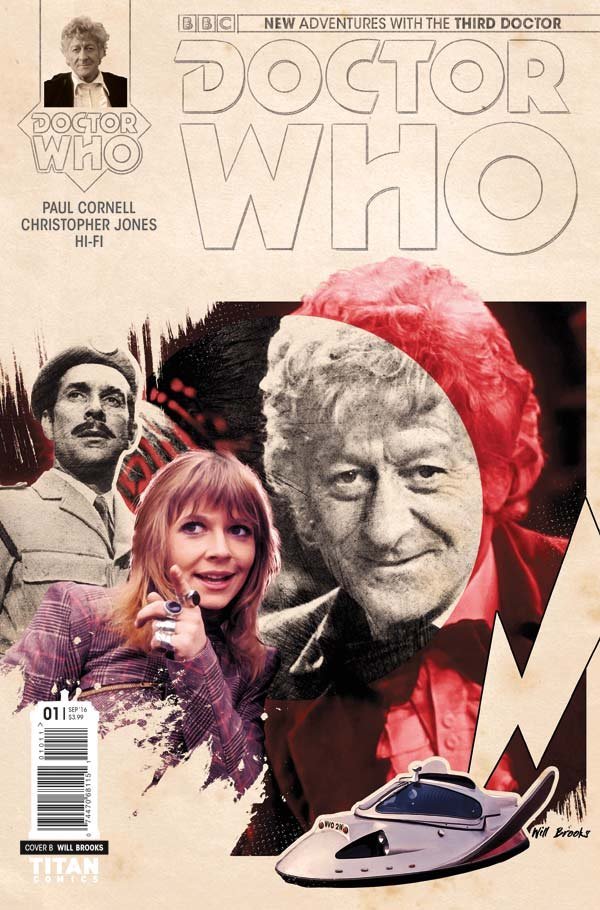 Cornell slips in a few more nods and winks to the revived era of the programme, which mostly pass without interrupting the adventure. But I found the inference that Jo Grant coined the phrase ‘timey-wimey’ (much to the Doctor’s chagrin) a little jarring. Probably because it was more appropriately rebutted by the War Doctor in The Day of the Doctor.
There are a number of great twists (often cliffhangers the end of an issue) in the The Heralds of Destruction that I don’t want to spoil here. So I suggest if you want to save your shock and awe to when you turn the last page, don’t read the description of future issues on the Titan webpages. I did.
So, I hope I’ve made it clear that, in the vast majority, I really enjoyed these comics. I don’t want you to misconstrue what I’m about to write. Because there is one ‘joke’ I found very offensive and totally out-of-place in this otherwise fantastic collection.
Near the start of the adventure finds the Third Doctor regaling a group of upper-class old duffers at his gentleman’s club (where he’s obviously not just a member, but a fixture). This harks back to an exchange in Terror of the Autons where the Doctor namedrops Lord Rowlans referring to him using his nickname ‘Tubby’, as a way of putting the upstart civil servant Brownrose in his place. It’s always been unclear whether it’s a bit of bravado on the Doctor’s part; would our unconventional, iconoclastic hero really spend his leisure hours with an elite bunch of aristos in a men-only establishment?
Cornell chooses to make it plain: yes, he did. And it’s clearly to make the point that the Third Doctor’s exile has changed him – he’s become established, a bit stuffy, even. And that’s fine, because there’s an appropriate pay-off at the denouement of the adventure, where the Doctor realises how far he’s strayed. What irks me is the snatch of an anecdote the Doctor utters, intended to regale and entertain the assembled club members. ‘So I said to Pol Pot,’ smarms the Doctor. ‘“Polly” I said…’ At which point he’s interrupted by what I can only presume to be common decency.
Yes, the inference here is that our champion of goodness, justice, and tolerance spends his spare time hob-nobbing with a ruthless dictator responsible for the torture and death of 1.5 million (possibly more) of his own people in Cambodia (in the course of five brutal years in the late 1970s, famously depicted in The Killing Fields). The fact that anyone with half a conscience might hang about with Pol Pot (knowing what he is doing/will do) and jovially call him ‘Polly’ is not only ludicrous, it’s actually pretty sickening.
It’s not quite the equivalent of the Doctor saying, ‘So I said to Adolf Hitler…‘“Addy” I said…’ But it’s in that unacceptable stupidity zone. Now anyone who has read my witterings before on DWC knows that I’m all in favour of a good (more often bad) joke. But this should never have got past the editors and into publication.
Yes, I am fully aware that this is a reference to when the Third Doctor famously says to Jo in Day of the Daleks, ‘I remember saying to old Napoleon. Boney, I said, always remember an army marches on its stomach.’ Which is a clever line, the Doctor taking credit for one of Napoleon’s most well-known phrases, while also calling him ‘Boney’, the nickname the British used to mock the French leader. I am also aware that Napoleon is a controversial figure and responsible for a lot of suffering, but he is also admired and achieved some great things. Pol Pot is not an equivalent.
Now, I’ve met Paul Cornell and he’s a lovely guy, and by all other reports that’s exactly what he is. So I don’t want to blame him for this misstep, but please do better next time!
However, don’t let this distract you too much from this magnificent comic series. It’s a rip-roaring adventure with a big heart and some dramatic twists: tightly scripted and expertly drawn. A must have for any late-night under-the-covers-with-a-torch adventures. Just hold back on throw-away jokes about people who commit genocide in future. Please.