Almost two years since we were treated to Series 1 of The Omega Factor, Big Finish has released a second series of stories for Dr Anne Reynolds (Louise Jameson) and Adam Dean (John Dorney). Before we proceed, a quick recap.
Back in 1979, Jack Gerson created The Omega Factor for the BBC. The show was cancelled after a single season due to pressure from Mary Whitehouse and has lain almost forgotten since then, until Big Finish contacted Natasha Gerson (Jack’s daughter and Morag, one of the central characters from the programme) and the first series was the result.
[soundcloud url=”https://api.soundcloud.com/tracks/308417063″ params=”auto_play=false&hide_related=false&show_comments=true&show_user=true&show_reposts=false&visual=true” width=”100%” height=”450″ iframe=”true” /]
The first box set the groundwork and introduced the concepts; time has moved on so unlike some other Big Finish ranges, this is not set at the time, but set now. This means Louise Jameson gets to play a woman her own age, and is now in charge of the mysterious Department 7 in Edinburgh. In 1979, they investigated the psychic, came up against a powerful figure called Drexel, a psychic named Tom Crane (who had a relationship with Anne) and a mysterious cabal, named Omega. All this conspiracy was parked and the first set of stories focused on introducing John Dorney’s Adam Dean (the son of Tom Crane), the Department, and the supernatural. This done, the second series now has the chance to explore the mythic context of the show. This it does with aplomb.
First up is Phil Mulryne’s Somnum Sempiternum, and a trail of impossible suicides leads to a scientist conducting dangerous psychic experiments. Phil wrote The Old Gods for Series 1, a story nominated for a BBC award. He brings back the character of Dr Jane Wyatt, played with evil relish by Camilla Power. It serves as a good reminder of the world of The Omega Factor and introduces some of the elements of a boxset arc. It pulls no punches in describing its horrors, and is a welcome, if grisly reminder of the show’s dark roots.
Next, Roy Gill moves the action to Tollimore Prison, in The Changeling. As Roy discusses in the extras, the idea of the changeling is entirely appropriate for The Omega Factor, and John Dorney has to survive undercover as he shares a cell with a convicted and unrepentant murderer. John Dorney plays Adam Dean just right; he has confidence in his psychic abilities, a compassion for all human beings, and a timidity anyone would experience were they to be incarcerated in these circumstances. Anne, meanwhile, tries to piece together the clues to an ever-growing set of deaths and starts to glimpse the wider conspiracy at work. If Adam is the focus of the second story, Louise Jameson’s Let the Angel Tell Thee brings Anne into the spotlight with a romance involving the genial Anthony Archer (Hugh Fraser) and Adam immediately dislikes him, while also getting to know a fellow psychic with powers exceeding his own. Louise draws on her own experiences of being an older woman living alone (though the resemblances to Anne stop there) but it is in the more horrific scenes where the scripts and the acting present some of the more harrowing moments Big Finish has ever created. It is to director Ken Bentley’s credit, and producer David Richardson’s, that they got this just right – awful, frightening, yet scarily believable in context.
Script Editor, Matt Fitton wraps the set up with Awakening. Here we learn that Omega may be real, and poor gifted Morag, long abused and use by Drexel in the ’70s and left in a coma, does her best to give Adam what assistance she can, but nobody knows where she has gone. The full extent (or is it?) of the conspiracy is exposed, but it takes Adam and Anne the bulk of the episode to realise the threat presented by Omega. Adam has his own problems to deal with as well, and while matters reach a resolution of sorts, there is plenty more left to explore in future sets of stories.
Speaking of future sets, the genie is out of the bottle on the Omega conspiracy, but the series also works when stories are not directly connected to that (as the first series showed so well), and it would be a good thing if the Omega threat didn’t take over as the only problem in town. We learned a bit more about Anne and Adam in this set but there is a lot left teasingly unexplored. Hopefully Adam’s personal life will get fleshed out further as we explore the world of The Omega Factor in years to come.
The Omega Factor Series 2 is out now from Big Finish. 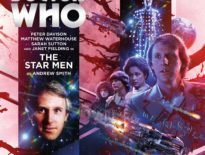