Few ranges have the ambition and ingenuity of Candy Jar’s Lethbridge-Stewart books. This much is evident from the breadth of novels so far, and an added treat for subscribers: the downloadable short stories which regularly come free. And collating these together, we have The HAVOC Files series, the second collection of which includes five shorts previously available only as PDFs, two exclusive new stories, and material from several full novels.
But how does it work as a collection? Are any short stories worth the cover price alone? Or are any absolute stinkers?
If you’ve read any Lethbridge-Stewart books, you’ll know the latter is very unlikely. Indeed, the majority of the stories here deserve praise.
We start with In His Kiss by Sue Hampton, set after the 11th chapter of The Forgotten Son, the first novel of the range. Sadly, it’s not the strongest of starts: it’s actually a surprisingly dark study of grief and obsession. But if you’ve not read the associated book, or have a sketchy memory of it, the whole thing will be very confusing. Still, most of the readers will be die-hard fans so will have good enough knowledge to carry on.
Fortunately, Hampton’s writing style is certainly enjoyable, and it does at least introduce a loose theme for the book.
That theme is death. Cheery, eh? Hey, you’re a Doctor Who fan! Morbid curiosity is part and parcel of that, right? 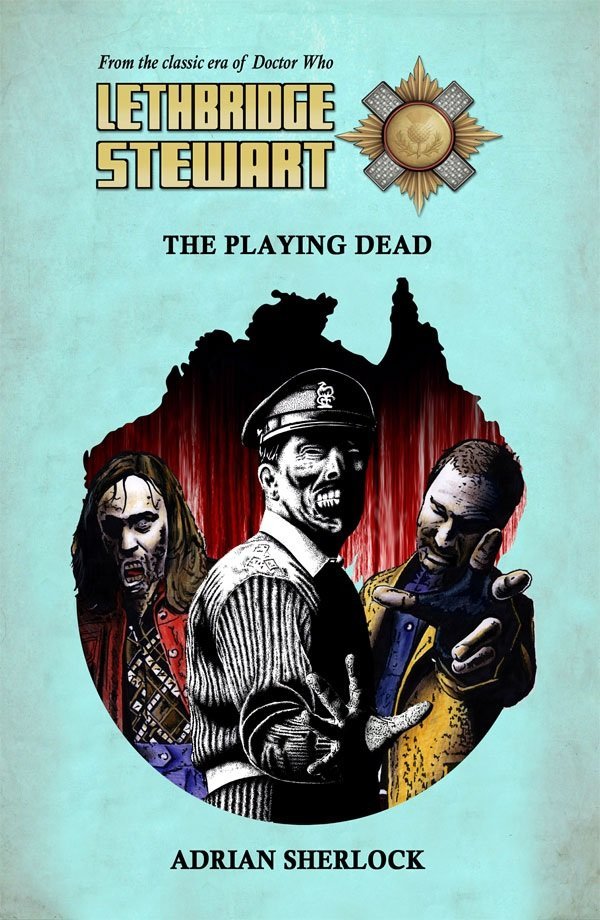 The next short to pick up that theme is Adrian Sherlock’s The Playing Dead which finds supporting characters, Anne Travers and Bill Bishop in Australia, and surrounded by zombies. It’s a very effective tale, immediately putting readers on the back foot and rarely letting them get their balance. It feels like it’s riding the wave of popularity that The Walking Dead is currently enjoying, and the unfamiliar surroundings add to the general feel of isolation.
The only problem is, too many questions are left unanswered – probably because it’s set after Sherlock’s full Lethbridge-Stewart novel, The New Unusual… which isn’t published until October 2017. It’s a shame, but at least we can revisit The Playing Dead following that.
Straight after is Ashes of the Inferno by Andy Frankham-Allen, undoubtedly one of the strongest stories in the collection. This deals with the aftermath of the Third Doctor story, Inferno, and builds on Lethbridge-Stewart: The Schizoid Earth.
Inferno is a much-loved serial, deservedly so, and this sequel feels like a perfect epilogue. It’s surprisingly harrowing (in a good way!), contemplative, and emotional. Frankham-Allen does a magnificent job in considering the huge implications of being separated from your world, and what might happen to you should it die.
What’s more, he explores the relationships most important to Alistair, making this a vital tale for fans of the Brigadier. Similarly expanding on a TV serial and mulling over mortality, we have Sarah Groenewegen BEM’s The Lock-In. This is set shortly before The Wedding of River Song and consists of letters between the Brigadier, and a woman called Pearl Hammond (which admittedly sounds as if she comes straight from a James Bond title). I’ve never really cared for stories told via letter, and wasn’t actively looking forward to reading The Lock-In – but I was wrong. This is a wonderful, understated gem steeped in sadness yet finding something shining in the darkness. It underlines the fact that anyone can be a hero, and that’s something to celebrate.
Should Alistair’s final days be explored some more? The Lock-In makes a strong case for it.
House of Giants by Rick Cross, the second short in this book, also details the consequences of a Doctor Who TV story, one which you can probably guess. Yes, after Planet of Giants, Alistair and Anne were called in to investigate, and minor incidents ensue.
Don’t belittle this tiny tale, though: it’s an excellent, upbeat story that bodes very well for Times Squared (in case you’ve not read Cross’ full Lethbridge-Stewart novel). I love the idea of the First Doctor inadvertently causing trouble for friends he’s not even met yet, and applaud Rick’s ingenuity in exploring the consequences of an often-overlooked Doctor Who.
But don’t worry: the collection isn’t weighed down wholly by a morbid theme or reliance on Who serials. Just look at The Black Eggs of Khufu by Tom Dexter, which actually means more to The Doctor Who Companion than you know: the announcement of this free Easter-related PDF was on the same day as the DWC’s launch. There you go, fact fans!
The story itself is a frivolous one, finding Alistair investigating a dead alien and strange black eggs in Egypt. Its central premise is intriguing, and it’s a fun interlude, if not an especially memorable one. It moves at a great pace, however, and it’s always nice to “see” Lethbridge-Stewart in unusual surroundings. This is followed by The Band of Evil by Roger J Simmonds and Candy Jar’s Head of Publishing, Shaun Russell. It involves a band hypnotising listeners, and bizarrely reminded me of The Amazing Spider-Man #16 (Spidey versus Daredevil, egged on by the mesmeric Ringmaster). That’s definitely a compliment! As with The Black Eggs of Khufu, The Band of Evil is a fun done-in-one story with a cracking pace and some solid characters, including Captain Younghusband.
In case you’re not aware, this driver is named after the now sadly-deceased Eileen Younghusband, member of the Women’s Auxiliary Air Force (WAAF) during World War II. Candy Jar published her autobiography, One Woman’s War, and it’s lovely to know she’s left such a wonderful impression on the publishers.
The rest of the collection is taken up with material from other novels, including John Peel’s Exodus from Venus, the original prologue to The Grandfather Infestation. It does set the novel up nicely, and it’s a solid addition to The HAVOC Files 2, but it’s really for completists only. That’s okay: it’s only a few pages long and does add enough depth to justify its inclusion here. Actually, it makes you want to read the full novel, so it does its job brilliantly.
Far more successful, however, is the slow-burner that soon becomes a chilling and thought-provoking piece about an ever-adapting alien. This is Schädengeist’s First Love by Jonathan Cooper, previously unpublished interludes from The Showstoppers. It really begs the question, why weren’t these chapters included in the final book?! They’re stunningly written, haunting, and expand on the villains of the piece.
Wow. It’s genuinely superb, and acts as a great prologue to The Showstoppers. Finally, we come to the first part of The Lost Skin, an exclusive story that’s told by Andy Frankham-Allen across numerous volumes of The HAVOC Files. Essentially, it’s a full novel split between different books. A fine idea, and pulled off well.
I’ve never been particularly fond of Harold Chorley (but isn’t that the point of him?), yet Frankham-Allen makes him work really nicely here. Andy’s characterisations, as you might expect from the editor of the range, are just perfect, and it’s nice that we catch up with Professor Edward Travers again (even if the circumstances are quite sad).
It’d be unfair to judge this story based on its opening part… Nonetheless, it’s a very promising start.
That serialised story concludes the book, and however enjoyable the first HAVOC Files was, this second one hangs together far better. Topped off with a gorgeous cover by Adrian Salmon (my favourite so far of the range, in fact) that neatly captures many of the stories inside, this is as damn near perfect a collection of short stories as you’re going to get.
Ah but how do you get it? The original physical copies are now sold out! Fortunately, you can purchase it as an ebook for just £4.99. Now that is a bargain.