It is with great sadness that we report here of the loss of Victor Pemberton a few days ago at the age of 85. He was an actor, writer, and script editor, who will best be remembered amongst Doctor Who fans as the creator of the iconic sonic screwdriver – the most magical of magic wands.
Victor was born on 10th October 1931 (same birthday as my mum!) in Islington and his career started out with writing radio dramas in the 1960s and keeping that up right through to the 1980s. His writing credits outside of Doctor Who take in such delights as The Adventure of Black Beauty and the British version of Fraggle Rock, no less!
His acting career took some detours from the writing with minor acting roles in North and South, Those Magnificent Men in Their Flying Machines and The Yellow Rolls Royce.
“There we are. Neat isn’t it? All done by sound waves.”
Of most interest to us here, of course, was his work on Doctor Who, which started in 1967 (the year I was born!) as an Assistant Script Editor. In 1968 he was promoted to Script Editor with The Tomb of The Cybermen. Of the utmost, mostly most interest, though, was the 1968 story that he wrote, named Fury From The Deep, in which he introduced the Sonic Screwdriver. Little did he know at the time what an iconic item this would become. According to Wikipedia, Fury… was based on an earlier radio play he wrote called The Slide, which also starred the earliest incarnation of The Master, Roger Delgado. 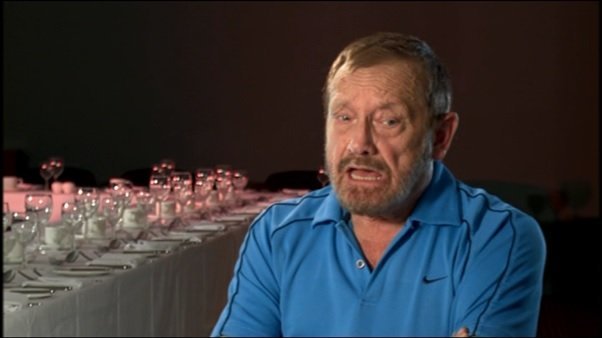 Fury from the Deep may have been Pemberton’s only contribution to the TV series, but it was one of which he was very proud.

“The cost of mounting Fury was astonishing, for budgets for filming in those days was miniscule, and when you think that a helicopter had to be used, and fake foam sprayed onto the sea, no wonder I got a few glares from the production crew! However, the late Hugh David did tell me that the scale of it was a challenge that he greatly enjoyed, and, as far as I’m concerned, he met that challenge superbly. But the great joy of getting Fury onto the screen was working with dear old Pat Troughton, who was already a friend, together with Debbie Watling, who had the best scream in the business, and Fraser Hines, who was the best practical joker!”

Victor was also responsible for another notable first – he wrote The Pescatons, which was the BBC’s first experiment in Doctor Who spin-off media, being an audio drama released on vinyl record. He also novelised The Pescatons, which coincidentally was the LAST book released in the Target series of Doctor Who novelisations.
Victor’s death was reported by his family on 13th August 2017 (which also happens to be my parent’s wedding anniversary!)
So, he shared a birthday with my mum, passed away on my parents’ wedding anniversary and started working on Doctor Who in the year I was born. Amazing coincidences. Or, in the words of the Eighth Doctor, “I love humans. Always seeing patterns in things that aren’t there…”
As a postscript, this is probably the first obituary we have written at The DWC for someone we have previously interviewed, back in April of 2016. Go and read that interview now and appreciate a little more what this man contributed to the show during his short time as a script editor and writer and how he felt about modern Who, who his favourite modern Doctor was and why, and his interesting thoughts on what the BBC did with the sonic screwdriver in later years…
Victor Pemberton will be missed. Our thoughts go out to his friends and family at this difficult time.

by Simon Mills time to read: 3 min
News Karen Gillan Wants to Play The Joker
News Out Now: Titan Comics' Doctor Who Tenth and E…
0
%d bloggers like this: