Remembering Doctor Who: The Adventure Games – The Gunpowder Plot

Sadly, Matt Smith Week is drawing to a close on the DWC, but this does at least present a perfect opportunity to remember The Gunpowder Plot. Now, you may not recall this particular serial: it didn’t screen on TV, and you won’t find it on book shelves. In fact, it’s often forgotten, alongside its peers, City of the Daleks, Blood of the Cybermen, TARDIS, and Shadows of the Vashta Nerada.
These were, of course, Doctor Who: The Adventure Games.
The first four titles, comprising Series 1, were released between June and December 2010, while The Gunpowder Plot opened Series 2 on 31st October 2011, a little under a week away from Bonfire Night.
The games were free to download from the BBC website, and starred Matt Smith as the Eleventh Doctor, Karen Gillan as Amy Pond, and, for Series 2 only, Arthur Darvill as Rory Williams. Nick Briggs also voiced the Daleks and Cybermen in Series 1, but The Gunpowder Plot especially boasted an all-star cast.
Ralf Little, for instance, played Guy Fawkes, some years before his actual Doctor Who debut in Smile (2017). He was joined by Emilia Fox (Silent Witness); Phil Daniels (Quadrophenia); Miles Richardson (Gallifrey); Dan Starkey (Strax in numerous episodes, including The Snowmen and The Crimson Horror); Dalek operator, Barnaby Edwards; and Alexander Vlahos (Versailles; The Confessions of Dorian Gray). 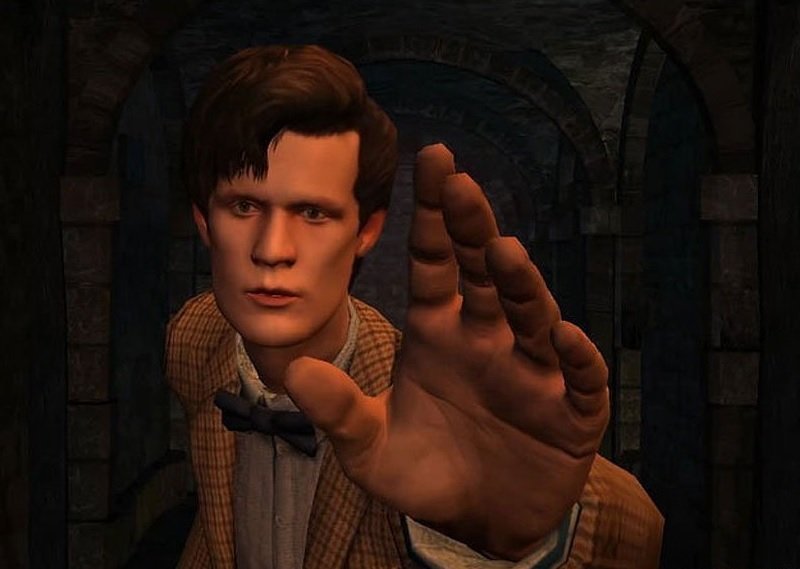 It’s an incredible cast, one which you’d love to see on television, and here they are, working together on a video game. A free one, no less. The BBC hyped it up as:

Doctor Who: The Gunpowder Plot is set in 1605. Guy Fawkes and his gang are hell bent on blowing up the Houses of Parliament and the Doctor becomes embroiled in their scheme when it emerges he’s not the only alien in town… Old monsters return and new threats must be faced… By you, playing as one of the TARDIS time travellers!

As you might expect with Dan Starkey credited, The Gunpowder Plot features the Sontarans, and their natural enemies, the Rutans, previously seen solely in Horror of Fang Rock. The tale was written by Phil Ford (The Waters of Mars; Into the Dalek), and developed by Sumo Digital, and was a longer narrative than the previous releases.
… Which is little comfort. Doctor Who: The Adventure Games never continued, falling victim to the BBC’s quest to realise Doctor Who: The Eternity Clock (2012). The Adventure Games continued the tone of the show, accessible to all, and was perhaps Doctor Who‘s most natural fit in the video gaming world.
It had the full backing of the BBC cast and crew, but the series was a victim of its own success – that success at least partly owing to the fact it was free. These freebies couldn’t last long – it was naïve of us to think any different – but it was surely good while it lasted.
We miss Doctor Who: The Adventure Games, even more so because we can’t even download them anymore. All that work has gone to waste.
But for now, with winter drawing in around us, let’s remember this lovely little section of the Doctor Who world, one that shone very brightly but, like the fireworks lighting up the night’s sky, was doomed to burn out and fade. I guess that’s the story of Doctor Who too, isn’t it? Happy ever after doesn’t mean forever; it means time. Little time.
What are your memories of Doctor Who: The Adventure Games?

Remembering Doctor Who: The Adventure Games – The Gunpowder Plot

by Philip Bates time to read: 2 min
Features Sonic Feedback: Here's What You Thought of Em…
Features What's in a Name: Journey to the Centre of th…
0
%d bloggers like this: