Although it’s many years since they were a common sight on British streets, one city where you can still see police boxes in situ is Glasgow, where, thanks to the efforts of conservation groups in the 1990s, there is every chance you’ll stumble across one. Rather wonderfully, locals there are so used to seeing TARDISes dotted around that they go unnoticed for the most part and it’s only visitors who stop for a photo, a joke with their friends about where they fancy going, and a quick push at the door (just to see, you understand…).
Tourism authorities have cottoned on to this, naturally enough, and in 2014 launched the Whovian Guide to Glasgow, a walking tour of the city centre, to coincide with former Glasgow School of Art student Peter Capaldi’s debut as the Doctor.
Three years on, the guide is due an update and as we’ll see isn’t always 100% reliable but it certainly provides a handy tool to explore the city. Glasgow has a relatively compact city centre and it’s perfectly possible to see all the police boxes in a day – although if you’re there for a weekend, as your correspondent was recently, better to stroll and allow time to stop and browse along the route to take in some of the many attractions it has to offer. The Doctor has parked the TARDIS in some pretty nifty places over the years, but perhaps never more so than here in the west of the city where this box is plonked very neatly in a gap in the railings at the edge of Glasgow Botanic Gardens. Probably the smartest of all the police boxes, this one has been in use as a small (but bigger in the inside) coffee stall and, as recently as August 2017, was up for rental. The rent asked for was £5220 per annum – not bad for all of time and space, I reckon. Formerly in the Transport Museum, this vividly coloured box presents an eye-catching sight in the heart of Glasgow’s shopping area and is reportedly used for for selling newspapers, although it was closed when I visited. And as you can see, I knocked and shouted and everything.  The decision to use red paint was apparently down to frugally-minded city authorities who wanted to use the same colour as for post boxes and telephone boxes rather than splash out on tins of police box blue. The idea surely has potential as an adventure whereby negatively charged ions (or something) emitted by the Cybermen cause chaos with the TARDIS’s colour scheme. 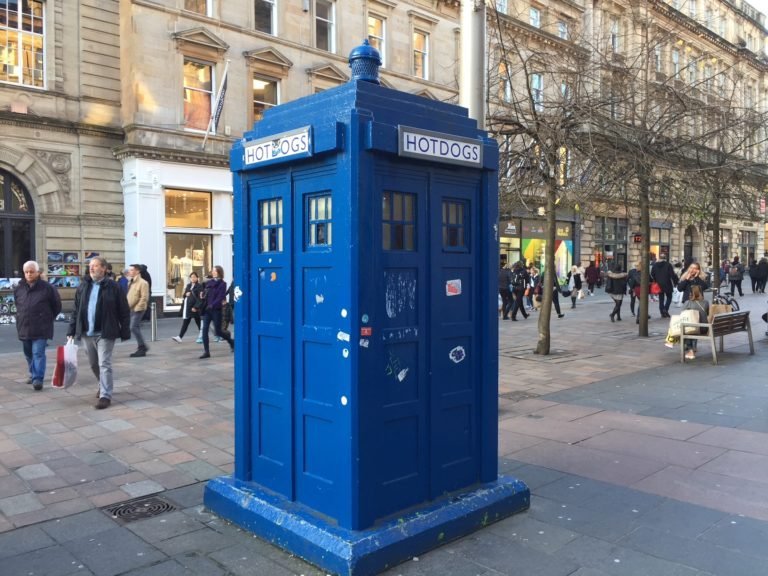 Looking a bit bashed up and worse for wear, this box on Glasgow’s bustling main shopping street is reported by the Whovian Guide to be home of coffee shop, ‘Go Public’, although like the previous one it was closed when we visited. It’s most notable for the Hot Dogs sign across the top which presents an interesting spin on the Bad Wolf TARDIS which caused such alarm at the conclusion of Turn Left.
But what temporal warning could the message be designed to send the Doctor on this occasion? To pick up a takeaway? Over to you, Chris Chibnall… 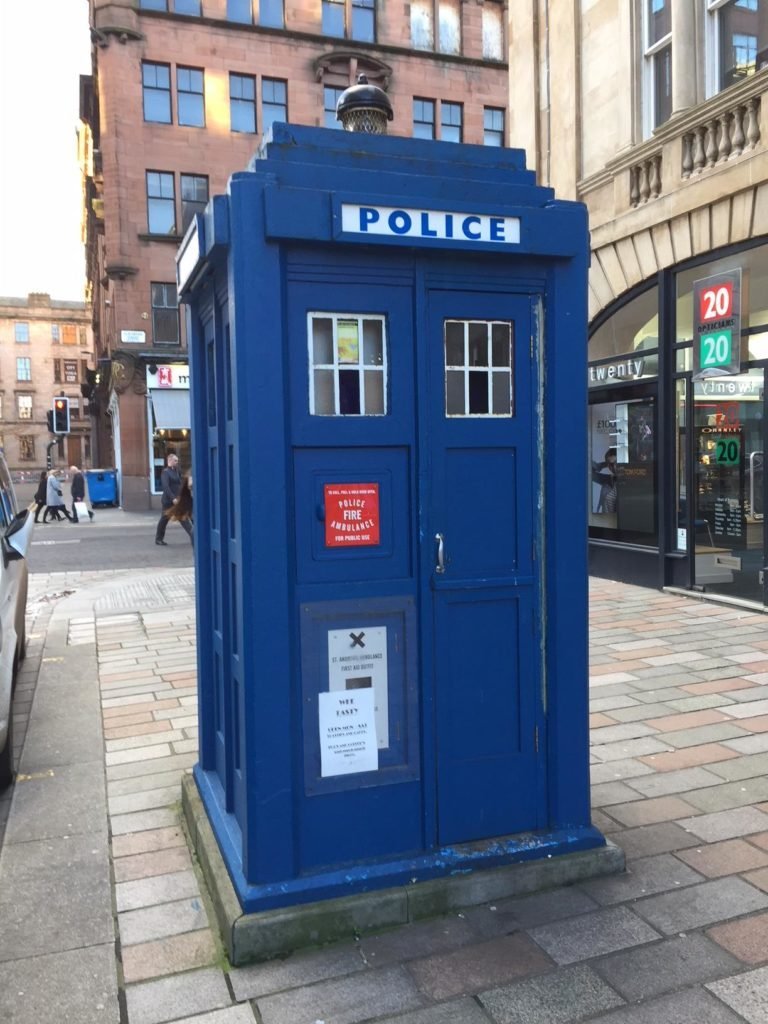 Located in the city centre close to Merchant City, this box was apparently painted red until a few years ago. The sturdy concrete base you can see on this and the other boxes is a sign that they are all solidly made constructions.
Close by is another entry on the Whovian Guide – Ingram Street where, the guide excitedly reports, ‘in 1978 audiences tuning in to Scottish TV News were surprised to see a Dalek running riot… accosting traffic wardens and young children, as scenes were filmed for an episode of the Doctor Who series’. It’s okay, you haven’t somehow missed out on a lost Tom Baker story – said Dalek wasn’t in fact being filmed for the show, although it’s not entirely clear what was going on – judge for yourself by viewing the clip over at Scotland on Screen. Reported by the Whovian Guide as still in use by the council’s Community Safety Team and Police Scotland, this box sits proudly by the side of the road – an image reminiscent of some of those early moments in Rose when viewers were being introduced to the Doctor all over again.
I’ve concentrated here on the police boxes featured in the guide (although the one at Cathedral Square eluded me despite my best efforts to find it – perhaps it’s been removed, or has a cloaking device fitted?) but there are other points of interest on the tour. Sadly, we ran out of time to check out the Sunken Dalek Mural but it will be fun to snap that one next time, and elsewhere you can check out places associated with both Peter Capaldi’s and David Tennant’s time in the city. For anyone with an interest in Doctor Who, the police box trail presents a quirky way to explore Glasgow and see these iconic structures in place.
Download the Whovian Guide to Glasgow Tour now.

by Jonathan Appleton time to read: 3 min
Features Post-Doctor Who Fandom, And How To Do It
Features Not the Doctor You Were Expecting: Doctor Who Star…
3
%d bloggers like this: