It seems hard to believe, when you look back on it, that Harry Sullivan was originally only going to be in Doctor Who for a single series.
Harry – played to perfection by Ian Marter – is one of the show’s most beloved companions, faithful and steadfast, if prone to occasional bouts of stupidity. Despite earning the Doctor’s wrath on more than one occasion, his sense of pluck, resolve and loyalty never wavered throughout his two years in the TARDIS, from that first appearance as the newly-regenerated Doctor’s physician in Robot to that eloquent farewell in the closing moments of The Seeds Of Doom. It’s impossible to imagine the likes of Planet of Evil or Pyramids of Mars without him, and yet it came so close to not happening, – because, as is well-documented, Harry very nearly jumped ship after his encounter with the Zygons.
According to a popular urban legend, the original decision to dispense with Harry was made purely on the basis that the character felt redundant. Tom Baker was not the older man the creative team had initially envisaged casting, and was able to do most of his own stunts; hence the need for a younger man to handle the action sequences (Terrance Dicks pithily refers to this construct to as ‘The Muscle of Russell’) was eradicated overnight, and it was felt that three was a crowd, at least in the TARDIS.
It’s a reasonable theory, but it couldn’t be further from the truth – as Dicks himself would later attest.


“It was the hair,” he admitted in 1998. “The problem was that Ian, bless him, was just too damned curly. And that wouldn’t have been a problem were it not for Tom, who was – and I think it may have been me who coined this expression – all teeth and curls. So we worried about the look of the thing and whether it was odd having two curly-haired gentlemen sharing the screen. ‘Course, Harry’s actually more bouffant than outright curly, but it was still a problem. I remember Barry thought I was overreacting, but my concern was that they’d look like two of those colonists you used to run into all the time in the show’s earlier years, the ones who were usually too stupid to realise the air above ground was perfectly breathable. So we ummed and ahhed about it for quite a long time. It’s funny, really, when you look back, because I honestly don’t know what we were worrying about. It was the seventies. Everybody was permed!” 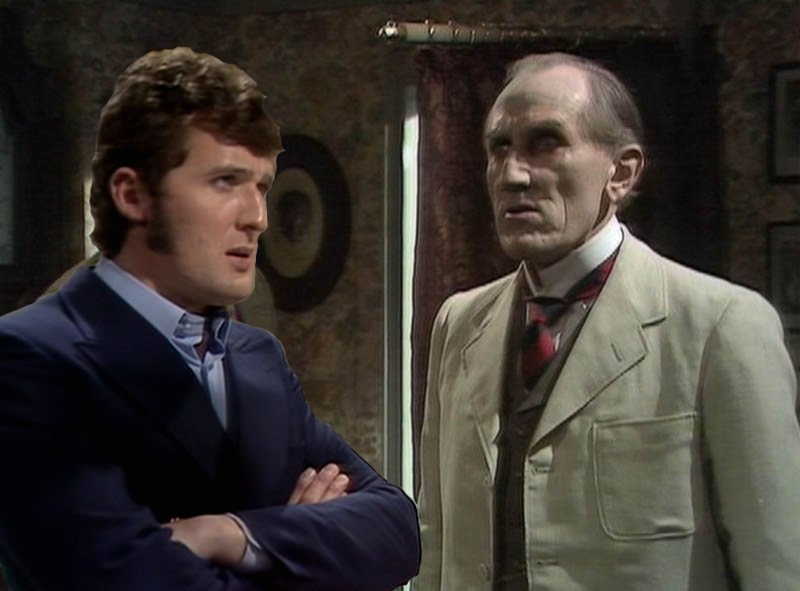 The decision to retain Harry beyond his original point of departure – the final episode of Terror of the Zygons – was comparatively last-minute, and led to some hasty rewriting. Some of this is more obvious than others. Certain scenes, for instance, are on the verge of lapsing into cliche when it is clear that Harry has nothing to add to a conversation that was originally supposed to take place between only two characters – as this extract from Seeds of Doom proves in abundance.
SARAH: Well, what is a Krynoid? I mean, what does it do?
HARRY: Yes, what does it do?
DOCTOR: I suppose you could call it a galactic weed, except it’s deadlier than any weed you know.
SARAH: In what way?
HARRY: Yes, in what way?
DOCTOR: Well, on most planets, the animals eat the vegetation, hmm?
SARAH: Mmm hmm.
HARRY: Obviously.
DOCTOR: On planets where the Krynoid gets established, the vegetation eats the animals.
SARAH: But that’s terrifying.
DOCTOR: Yes.
HARRY: It’s more than that, it’s petrifying.
DOCTOR: Oh, shut up, Harry.
Other changes are more complicated, but pruning the narrative tree can bear unexpected fruit, The Android Invasion being perhaps the best known example. In the original script, Sarah Jane was supposed to come across an android version of Harry, but after rewrites the the character was changed to the Brigadier, in what would be the final 1970s appearance for Nicholas Courtney – and setting the stage for an anecdote on which he would dine out for many years afterwards.
“It was an interesting way to go out,” Courtney told Doctor Who Magazine in 1989, “and as far as I was concerned, of course, that’s exactly what I was doing. Because that whole duplicate scenario rather reminded me of the version of the Brigadier that featured in Inferno, so of course that’s how I played it. Of course, in this instance I was supposed to be the Brigadier’s exact double, so I kept the uniform and the facial hair – everything was correct to the last detail. But Ian obviously knew about what happened when we filmed Inferno – someone had clearly told him. And during that scene where he’s strapped to the table I’m supposed to look off camera and bark out an order, and then turn back to interrogate him some more. And when I turned round, he was lying there wearing an eye patch!”
While some of the rewriting passed without incident, there were other stories in which the affable lieutenant simply didn’t fit, and thus the decision was made to temporarily remove him from the action – with often comic results. In Pyramids of Mars, for example, Harry spends the first two episodes locked in the TARDIS lavatory, where he passes the time by reading a particular book that led to one of the most infamous fourth wall-breaking moments in the show’s history.

“We had complaints about that,” Hinchcliffe admits. “Some from the parents who objected to what was quite literally toilet humour, but mostly from the die-hard fans who wanted to know why we put a Doctor Who annual on the shelf. The truth is that Lewis [Greifer] and I thought it would be funny, and Robert Holmes was eventually persuaded. But for many fans, it’s too much. They felt we were making a mockery of the show. The funny thing is they did something very similar in Remembrance of the Daleks and no one bats an eyelid. But I got hate mail. One chap actually burned his Doctor Who books – books which would probably go for quite a sum in the Amazon Marketplace – and then posted me the ashes with a note reading ‘DOCTOR WHO DIED TODAY’. Years later, it’s still just about the second most popular complaint I’m asked to address at conventions, right next to the Young Harry scene.”
Ah yes, that one. Hinchcliffe refers – as if anyone needed reminding – to the moment in The Brain of Morbius where Harry stumbles into the Sacred Flame and instantly regresses to childhood, much to the Doctor’s amusement. The three episodes in which he features have passed into Doctor Who production lore, with many behind-the-scenes rumours still unconfirmed thanks to the terms of several superinjunctions – and despite Hinchcliffe’s reassurances that the change was transient from the outset.
“It was never intended to be permanent,” he insists. “There’s a common consensus that once word got out, we re-wrote Seeds of Doom and brought Harry back to adulthood faster than we’d originally intended. But it was only ever intended to be a three-episode appearance, largely because Tom didn’t take to the character at all – ‘a f**king bad idea made even f**king worse’, I think were his exact words. Many people hate it because they consider it paved the way towards Adric, who was universally despised, and that Adric would never have existed if we hadn’t had Young Harry. I’m not sure I believe that, but I do seem to be in the minority.”

And what of the rumours behind Robin Leopold-Agnew, the thirteen-year-old stage school prodigy chosen to play Harry’s teenage self? It’s something that’s generally off limits to journalists, largely because when you ask anyone about it the results tend to be unprintable.
The late, lamented Elisabeth Sladen was more diplomatic. “He wasn’t easy to work with,” she said in 2004, “but I think that’s largely because he was so precocious. And of course after he’d dropped out of stage school, he went into politics and became Margaret Thatcher’s golden boy. I was going to say that he’d obviously realised acting wasn’t for him, but I suppose in many ways he never really left it.”
Certainly the rumours about Leopold-Agnew’s on-set behaviour – including the notorious Mushroom Soup Incident, terminology which has acquired the sort of legendary status to rival Jump The Shark – put a dampener on the character, and cast and crew alike were relieved when Marter returned for what remained of his final story.
“Seeds of Doom was wonderful for Harry,” says Hinchcliffe, “although he very nearly didn’t come out of it alive. In the first draft he wound up in Harrison Chase’s compost machine when his cravat got stuck. It was going to be the episode three cliffhanger, and we were going to resolve it with Sarah Jane weeping over the machine and lamenting that she never told Harry that she loved him. It would have been a brilliant piece of work, but Mary Whitehouse was good friends with Douglas Camfield and when she found out she threatened to chain herself to the BBC railings. Normally that sort of thing is good for Doctor Who, but on this occasion the men upstairs told me I had to commission another ending.”

In the event, of course, Harry drove off into the sunset – quite literally – with Amelia Ducat, having been enlisted as her personal chauffeur. It seemed an obviously mundane exit for a character who was happier with his feet on the ground, and given that this was the last time we would see Harry on screen – Marter’s untimely death in 1986 putting paid to any further appearances – it was a fitting send-off.
“Harry’s arc in Season 13 was an interesting one,” says Gareth Roberts. “He goes from being this reluctant traveller to someone who starts to enjoy it almost as much as Sarah Jane; it’s reflected in the way his outfits change. So it’s curious how, when he meets Amelia, he remembers how much he missed life on Earth. And they have that lovely conversation about it.”
That conversation – the memorable “tea and scones and buttered toast” monologue – is so famous it doesn’t need reprinting here, but it had so much impact on Roberts that he would eventually go on to pay homage to Seeds with his own episode, 2008’s Plant Life.
“I’d have dearly, dearly loved to bring Harry back for that story,” he says. “But I didn’t want to recast a dead actor. As it stood, we had Lis, and we had John Challis, and thanks to a nod from Russell [T. Davies], we managed to pay tribute to Ian in the best way possible.”

And when we look back at Harry, and the moments that defined him (the worm-eating scenes in Planet of Evil, the organ recital in Pyramids) it’s curious that perhaps the pinnacle of defining moments is one in which he doesn’t actually feature, at least on screen. The scene in question – where the Doctor, Donna and Sarah Jane, having vanquished the villainous Scorby, unite round Harry’s grave – stands as one of the most touching moments of Series 4, even more so because the act of remembrance isn’t just about Harry, but the man who played him. “I move on,” says the Doctor, staring down at the headstone. “I mean, I have to. But that doesn’t mean you forget. You never forget. People die. And sometimes that means I can never see them again – some things even a Time Lord can’t manage. But they never leave, not really. And that’s why I’m glad I’ve got two hearts. It makes it easier to carry people with you.”
We mine a well-worn cliché – not to mention a dangerous misstep – when we suggest that we should be living our lives like the Doctor, but this is probably one of those times when it’s not a bad aspiration.