It is with great sadness that we must report the passing of legendary comedian, Sir Ken Dodd, who died yesterday at the age of 90.
Though the world will remember him as an inspirational comic, Doctor Who fans will recall him being the Tollmaster in Delta and the Bannermen (1987), meaning he became one of a comparatively small number of cover stars for Doctor Who Magazine (#301, published in 2001, in case you want to search out Dodd’s wonderful interview with Benjamin Cook).
The Liverpudlian comedian was released from a six-week stay at hospital (following a severe chest infection) to marry his partner of 40 years, Anne Jones. The ceremony took place on Friday at their home in Knotty Ash – the same house he grew up in. Remarkably, Dodd continued touring his stand-up and variety shows until 2017, after which the chest infection took hold. This was, as his wife said, because he “just wanted to make people happy.” And he certainly did that. She continued:

“I have lost a most wonderful husband. He lived to perfect his art and entertain his live and adoring audiences. I’ve been overwhelmed by the love and affection which I’ve already received from dear friends and the public.”

The pair met when Anne appeared in the Ken Dodd Christmas Show in 1961.

Son of Arthur and Sarah Dodd, Kenneth Arthur Dodd attended first Knotty Ash School then Hold High Grammar School, but left at the age of 14 to work for his father as a coal merchant. His parents helped realise his dream of going into show-business by buying him a ventriloquist dummy, something he’d taken a shine to after seeing an advert for one in a comic book. He used it to entertain kids as a local orphanage then, at the age of 26, got his big break by performing at the Nottingham Empire. Ken once recounted:

“My mother and father used to take me every week to the Shakespeare Theatre of Varieties in Fraser Street. My dad loved the variety shows. The acts were mostly booked by a firm in Glasgow, and we saw a lot of Scottish and Irish comedians… [Variety] performers are individuals who’ve all taken the little bit of magic they’ve got and polished, burnished and refined it until they’ve got that small jewel of a performance.”

With a mix of variety and one-liners, Dodd gained prominence and stardom. His love for ventriloquism continued when he introduced the wider world to the Diddy Men, supposedly small citizens of his home town. He commonly referred to them in his stand-up routines, and eventually they made their on-screen debut in Ken’s 1960s BBC shows. The eccentrically-dressed and buck-toothed Diddy Men proved so popular, especially with children, they had a regular slot in TV Comic (which also featured Doctor Who strips); their own annuals; and an EP, Doddy and the Diddy Men (1965). 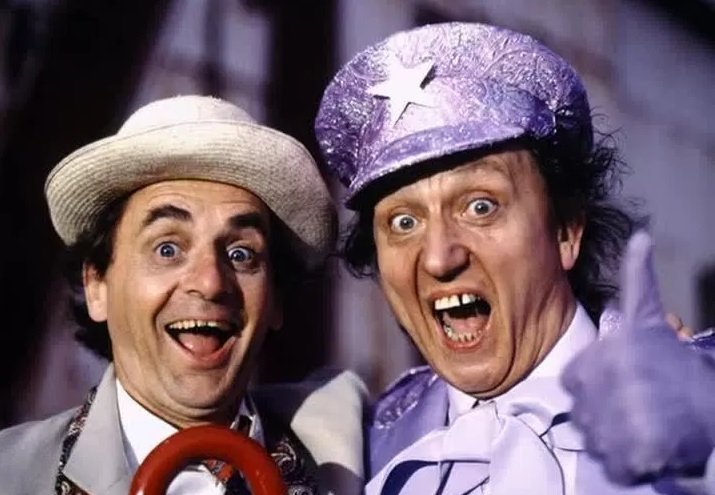 Indeed, Dodd’s passion for singing (which probably began when he joined the choir at St John the Evangelist Church, Knotty Ash) carried on, and he released his first single, Love Is Like A Violin in 1960; this charted at number 8 in the UK charts – although you’re more likely to recall his singing career for a 1964 cover of Bill Anderson’s Happiness (which became his signature tune), and, the following year, Tears. The latter sold over 1.5 million copies, and was the third best selling song of the 1960s in Britain. In fact, at the time of writing, it remains the 33rd best-selling single of all time in the UK. This is testament to how much Dodd was loved.
With Delta and the Bannermen, Ken made his sole Doctor Who appearance, apparently at the suggestion of Chris Clough. The director said:

“It’s a small part, but it’s a fun cameo. I liked the idea of this build-up – the Doctor and Mel arriving at a Toll port that only has its landing light on, and you then get the tension of, ‘What’s lurking there?’, and instead of something nasty, you get Doddy coming out with his razzer going ‘Hello, welcome! Surprise, surprise! You’ve won a prize!’.”

But Dodd was best known for his extensive shows. In the 1960s, he entered the Guinness Book of World Records, for the world’s longest ever joke-telling session: he told 1,500 gags in just 3 and a half hours! Nonetheless, if you went to one of his shows, that time seemed trivial: not only did time fly by, but his act would often continue for some 5 hours. He warned his audiences: “The sooner you laugh at the jokes, the sooner you can go home!”

Armed with a red, white, and blue feather duster – aka. a “tickling stick” – his energy and enthusiasm could seem like his routines were somewhat on the cuff; however, he kept extensive notebooks of his jokes, subsequently noting down which gained the greatest laughs and where. He once enthused:

“There is a rainbow of laughter. At the very top of the rainbow is a wonderful thing called white laughter. If you want to hear it pass any school playground and you’ll see little kids jumping up and down and laughing for the sheer joy of being alive. Further down are different colours. Yellow laughter is the laughter of clowns, so you do visual gags, red laughter is the laughter of romance and love so you do a lot of sweetheart jokes, and right at the very bottom are the dark colours of satire and cynicism. They’re good laughs but at the same time you are dealing with mysterious dark forces… Being an optimist, there’s always something to find joy in. It’s an often used, and sometimes a very ill-used word, but love is a marvellous thing. Some people love a goldfish, some people love a dog or a cat, some people even love each other. You try to foster that on stage.”

Aside from his numerous notebooks, his house, which he lived in throughout his life, was full of books, notably tomes on show-business and comedy, as well as detective fiction. He admitted that he was worried he’d never be able to read the thousands of books he’d collated.
It’s fair to say that he filled his time wonderfully. After being hospitalised recently, a statement was released saying that he was on the mend, and couldn’t wait to get back on stage.
Sadly, that never happened, but his routines touched the hearts of so very many people from so very many generations.

It’s tempting, of course, to just end this tribute to the tattyfilarious entertainer (who was appointed an OBE in 1982 and knighted in the 2017 New Year’s Honours List) with Happiness.
It’s also fitting, though, to conclude with this genuinely heartwarming quote that I think sums up Sir Ken Dodd’s infectious attitude: “Everybody has a story. Everybody is important. We’re all walking miracles because everyone has a new way of looking at life.”