Yes, we review clothes now.  But not just any old clothes, oh no! You wouldn’t find us collating our thoughts on your questionable choice of jeans, or critiquing your style of socks. Today, as ever, we’re talking Doctor Who.
Thankfully, the Seventh Doctor era has had a re-evaluation over the last few years. He’s brilliant. The stories are, on the whole, brilliant too. Sylvester McCoy might feel he wasn’t given a proper crack of the whip, but he still has an ever-expanding pool of fans.
And now, we can show off the fact that we love political satire, the darker side of society, and the Kandyman, thanks to Lovarzi and their pitch-perfect replica of his jumper.
McCoy reportedly wasn’t too keen on his costume, but I’ll go right out and say it: I think it’s great. I’m not the only one. Gone are the garish, haphazard colours of the Sixth Doctor. There are layers to the Seventh Doctor’s look; the tank top isn’t subtle, that’s for sure, but the Doctor has that exuberance and likes to show off. Yet there are finer details. Nonetheless, the Seventh Doctor sweater is what people think of when recalling this particular incarnation of the Time Lord.
Lovarzi’s version, then, is also full of detail. It’s precise and beautifully done. It’d take a lot of work to reproduce anything like this at home and the quality wouldn’t be as good.
The colours, too, are accurate and bizarrely, they work. Of course it’s clashing, but that doesn’t matter. It’s a piece in the rich fabric of our favourite show, so it’s bold and eye-catching and different from anything else. Basically, it’s Doctor Who. We should be proud of that. 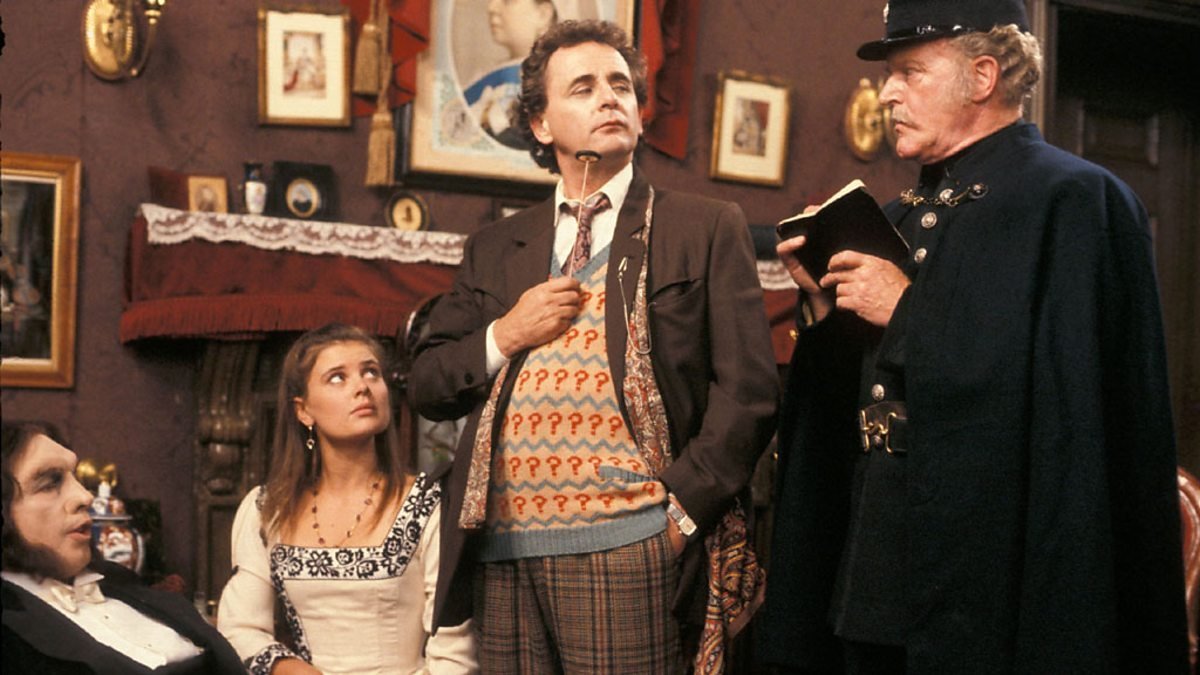 It’s the intricacies of the design that you notice immediately. Presented in a carry case, it’s too good to take out. Almost. Oh, as if you can own something like this and not parade around the house in it! You may even be tempted to start rrrrrrrrolling certain letters. When you’re done, you can pop it back into the case, no problem, ready for its next outing over Christmas, on a trip down to the shops, or just when the mood once more overtakes you.
There were two concerns, however, after taking it out of the case. Firstly, it feels quite heavy. Secondly, these sorts of jumpers tend to be a bit itchy around the neck. Fortunately, the worries slip away once you put it on.
It may feel weighty in your hands, but the jumper is surprisingly light when you’re wearing it. That’s not at the expense of warmth either. It’ll stand up to a cold wind just fine, and if you want to finish that Seventh Doctor look, slipping on a jacket won’t make you sweat off 10lbs. I’ve never worn a tank top before, so it initially felt odd not having sleeves. But it’s no different from a body warmer and you soon get used to it. At least you know it won’t get damaged when you’re doing your daily activities (or fighting fellow fans to get to meet a celebrity or find back issues at conventions). There’s no issue with the neckline either: it feels really comfortable. More than that – unnoticeable. It doesn’t sit too high and it doesn’t itch. That’s important and pretty rare.
The pockets are, essentially, only there for decoration. They’re probably too thin to hold much more than a pen or some jelly babies. That’s not really the point of this faithful recreation though. I doubt any fan would want to risk wrecking it by shoving in anything heavy.
You can’t escape the fact that this is an unusual item, but that makes it all the better.
I like to imagine McCoy wearing this jumper in a recording booth, threatening Daleks, Cybermen, and Haemovores for Big Finish.
The Seventh Doctor is brilliant. His stories are brilliant. Well done to Lovarzi for making something equally brilliant, which you can order direct for a more-than-reasonable £44.99 (with free shipping).
(Adapted from an article originally published on Kasterborous in November 2014.)