Can you believe that it’s been 10 whole years since the original Torchwood team were split apart, in the finale of Torchwood Series 2? Well, Believe it, because Captain Jack Harkness, Gwen Cooper, Ianto Jones, Owen Harper, and Toshiko Sato are back – for Big Finish’s latest audio boxset!
Though the other members of the clandestine organisation survived, Owen and Tosh left the show in Exit Wounds, written by Chris Chibnall, which aired on 4th April 2008. Fortunately, they’re reunited for the audio company, in a very special release. Here’s the simple synopsis for Believe:

The Church of the Outsiders believe that mankind is about to evolve, to reach out into the stars. Owen Harper believes that Torchwood has to do whatever it takes to stop them.

“It’s been ten years since there’s been an adventure featuring Jack, Gwen, Ianto, Tosh and Owen, and coming up with something big enough – and complex enough – to need them was great fun. After all, taking down an entire religion isn’t easy. But if anyone can do it…”

Yeah, they have previous.

And yep, the original cast returns too – John Barrowman, Eve Myles, Gareth David-Lloyd, Naoko Mori, and Burn Gorman. Myles admits it was tough juggling schedules, but worth it in the end:

“It’s incredibly difficult to get us all in to record at the same time. But we’ve managed to get these important audios out to our fans who have been loyal to us for such a long time.”

“This is the first time in a long while we’ve had the entire Torchwood team back together. It’s something we should do more often, as I know from travelling all over the world doing conventions, I’m meeting the massive amount of fans out there who want the old team back together doing stuff.”

Oh, and something of a pleasing surprise, Arthur Darvill also stars in the story, albeit not as Rory Williams – he plays Frank Layton, and is joined by Mac McDonald as Steve Ross, Lois Meleri Jones as Andromeda, Mali Harries as Val Ross, Rhian Blundell as Erin, Chris Rankin as Val’s Assistant, Lloyd Meredith as Davey Russell, Jennifer Sims as Grey, and Aled ap Steffan as Grey.
Directed by Scott Handcock, Torchwood: Believe is out now from Big Finish, for a limited time priced £23 on CD or £20 on download. 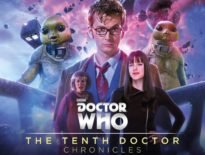