The Almost Brilliance of Scherzo

Robert Shearman is the best writer Doctor Who ever had.
Well, maybe, Maybe not. But there’s a strong case for it, granted buoyancy by a CV that speaks more or less for itself. His rendition of Frobisher is magnificent. Jubilee is a wonderful, heart-wrenching piece of work. And The Chimes of Midnight is the creme de la creme of Christmas specials. He’s written the best (arguably the only good) Dalek episode since the show’s revival. It made my nephew cry: this was not a bad thing.
But it’s Scherzo we’re here to discuss, because… oh, why not discuss Scherzo? If you’re looking for an example of how narrative restrictions unleash creativity in the most unexpected of ways, you could do a lot worse. It’s an amazing story – there is very little else in the canon, Big Finish or otherwise, quite like it – and while there are flaws (more on that later), it’s a textbook example of how Doctor Who can be fresh and exciting when you think outside the box a little bit. Ironic, considering the only thing outside the box is a circular tube.
In Eighth Doctor chronology – if not quite in release order – Scherzo directly follows Zagreus, in which the Doctor is possessed by a demi-God and winds up in a surreal parallel timeline with several previous incarnations and half the cast of Alice In Wonderland. The narrative is baffling and occasionally frustrating, but it’s quite fun spotting former companions in alternate roles. There is even a Pertwee cameo. There are also historic meetings (Romana and Leela), numerous scenes in which McGann appears to argue with himself, and an abundance of satanic nursery rhymes. It does not end well.


But it ends. And then Scherzo takes the Eighth Doctor and Charley and unceremoniously dumps them into a parallel universe which has no concept of time  – something that never really worked in practice, largely because such a principle is far too abstract to administer. It is, to all intents and purposes, a two-hander (the sole additional character is a mimic), and after the extravaganza of Zagreus’ three-disc opulence, this really is as minimalist as it gets. There is no real score to speak of and few sound effects, although the ones that do exist serve as effective jump scares. Brief nods to convention aside, it is a strange way to begin a series arc, and those who were expecting a return to the classic Doctor/ Charley adventures to which they’d become accustomed – replete with Edwardian banter and an undercurrent of sexual tension – were bound to be disappointed.
But as a bridge story (for that’s effectively what it is) Scherzo works superbly. It makes sense, in a way, to follow a sweeping, multi-timeline epic with something small, even if it’s a bit like following Infinity War with that weird burn mask episode of The Incredible Hulk. Zagreus was about the tantalising possibilities of a new universe; Scherzo‘s sensory-deprived ersatz takes that concept and runs with it until there’s no more paper on the loo roll. How different, Shearman seems to be asking, could an altered state really be if you used your imagination? It all turns out to be a staging area, but until we find this out, we are faced with the very real possibility that this is it: that this horrifying white space is the be-all and end-all of the Doctor and Charley’s new existence, and that parallel universes are far more like hell than even the likes of Inferno could have managed. (Incidentally, once the riddle of the circular tube is resolved, the next story in the Divergent series is Creed of the Kromon, which is about as generic as it gets, and mind-numbingly tedious as a result. Be careful what you wish for.)

What strikes you about Scherzo – both in concept and execution – is just how frightening it is. It opens with a darkening TARDIS, as oblivion beckons. The Doctor and Charley flee into the light, and then worry that they may have made the wrong decision, as outside isn’t any better. Surrounded by brightness that makes it impossible to see anything, and given no choice but to walk through a blank canvas until they drop, all the hapless duo have is each other, and even that’s not a given. Sensory deprivation brings about hostility and the threat of madness. There are arguments and moody, 30-hour silences. Well, not exactly. All around them, there is a constant high-pitched whine in the background, like someone rubbing a finger round the rim of a wine glass, played through a compression filter – and when it goes quiet, you know something is about to happen.
Indeed, the use of silence in Scherzo is one of its greatest assets. The fairytale narratives McGann uses to open each episode are delivered with textbook precision and appropriate dramatic pause, as if gazing intently into the eyes of whomever is listening to the story. With certain marked exceptions, the whole thing is just very quiet. There are long, uncomfortable moments of dead air – almost long enough to make you worry your CD player’s on the blink. (As a tenuously connected aside, I heard today that Samsung have planned a similar stunt for their new advertising campaign, in which millions of TVs will suddenly be subjected to bursts of white noise. The incredulous DJ asked “Whose idea was that?!?”, to which the obvious answer is Andy Kauffman.)
Really, Scherzo is about what would happen if you took the opening episode of The Mind Robber, removed the clunky robots, and turned up the brightness. It’s a story that could never work on TV precisely because it relies on its characters being unable to actually see anything, at least until the final chapter. It’s also a showcase for the Eighth Doctor’s nastier side: he spends much of the first half being actively hostile towards Charley, who cannot understand why her dearest friend harbours such resentment at her decision to follow him. “You silly, silly girl,” he sneers at the incredulous adventuress. “Do you think I want you here?” The distraught Charley finds her words falling on deaf ears. “But I love you,” she pleads, to which the Doctor’s response is “So what?” Rassilon may have purged the demon from the Time Lord’s soul, but the aftershock remains.

The only thing that lets it down is the romantic element. It’s always awkward when the Doctor tells someone he loves them (Davies was, at least, sensible enough to keep Tennant’s declarations chiefly unsaid) but in this particular story, love is a key theme and the Doctor and Charley have lengthy exchanges about it. It explains the Doctor’s grumpiness and Charley’s devotion – or perhaps that should be foolishness – in following him where he made her promise not to go, but as central as it is to the way the story unfolds, it’s frankly excruciating to listen to.
There’s an awful lot been written about that, in more time than we have today. So here’s an executive summary: yes, it fits with the Eighth Doctor’s romantic persona, and yes, it drives the narrative, and yes, it enables Fisher and McGann to flex their acting muscles. It’s just it jars somehow, a scene that Shearman writes to the best of his ability (which is to say, very well indeed), but which you wish wasn’t there. It calls to mind the Independent’s commentary on Blade Runner: The Director’s Cut, a release that lived up to its name by chewing off the fat, sensibly dispensing with Harrison Ford’s portentous voiceover, and that incongruous happy ending. “In its original form,” they wrote (and yes, I’m paraphrasing), “it was a flawed masterpiece: in this edition it is, quite simply, a masterpiece”. Perhaps it’s down to personal preference as much as anything else, but you wonder how Scherzo would run as a straight horror, with the psychological elements and love story toned down, or at least kept to that initial, bristly exchange.
Perhaps we’re nitpicking. This is, without a doubt, one of the most ambitious pieces Gary Russell’s ever produced, paradoxically because it is so scaled down: when the gloss is stripped away the harsh bright light of scrutiny shines down on what is left, like the whiteness of the TARDIS factory settings or, in this instance, the impenetrable light of the tube. Notwithstanding its role as an interconnecting narrative, the uneasy charm of this particular tale is in that sense of self-contained wholeness, like the tube that Charley and the Doctor wander around for what seems like an eternity: it stands alone and manages to be self-contained in spite (or perhaps even because of) the stories that bookend it. By turns mournful, elegiac, and downright scary, its minimalism renders it one of the most complete entries in the Doctor Who audio canon, worth a slot in anyone’s top ten if only for all the things it gets right; in that respect its flaws may, perhaps, be quietly overlooked, and perhaps the word ‘almost’ can be dropped from the top of the page.
Still can’t quite figure out why it’s called Scherzo, of course, but we’ll let that one go.

The Almost Brilliance of Scherzo 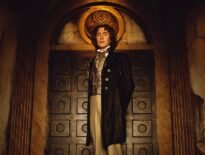