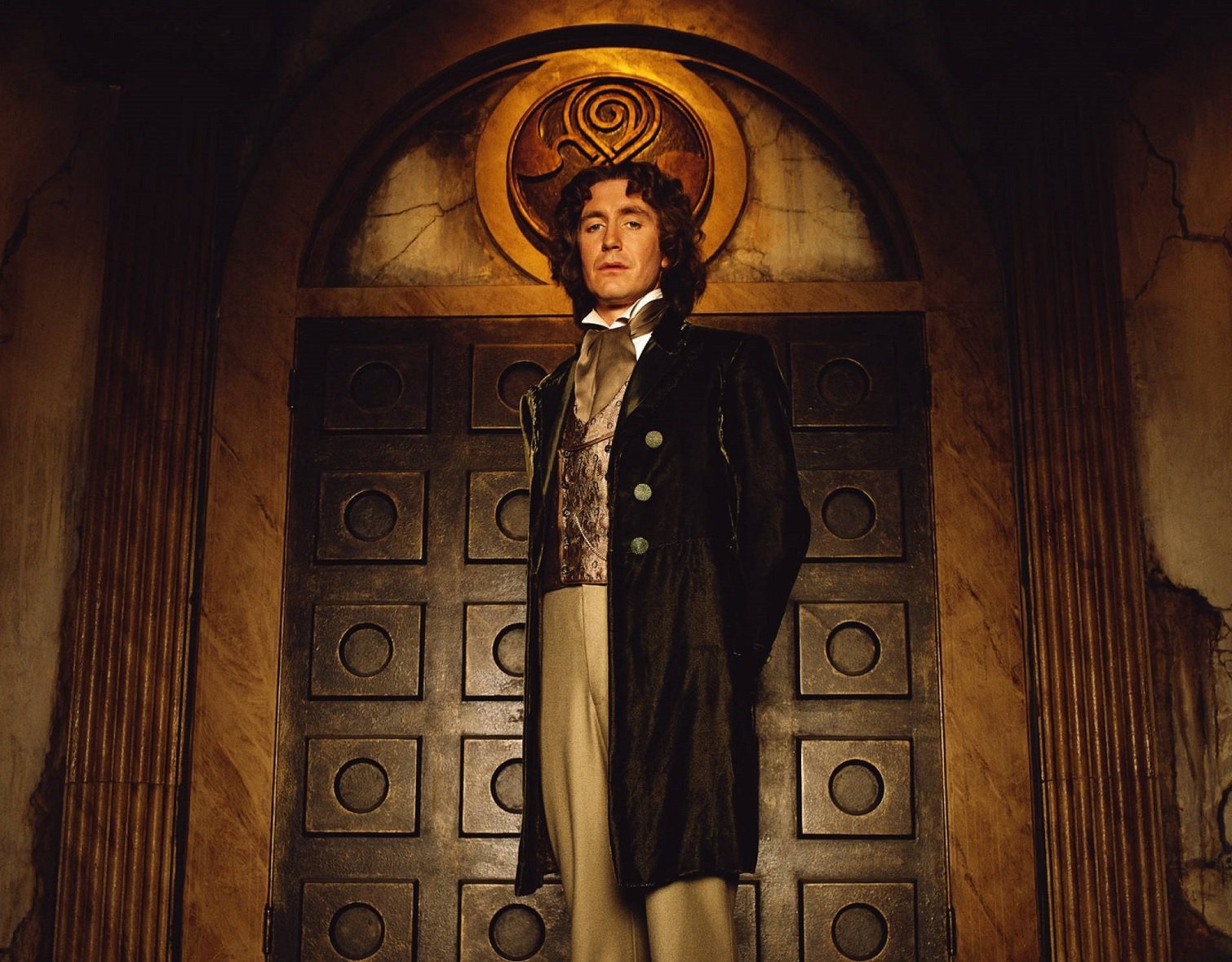 There are a few incarnations of the Doctor who fans, at one point in time, want to see return. Namely, all of them. Two Time Lords, however, frequently come up in conversations because, before 2013, they simply hadn’t returned to Doctor Who: these are Tom Baker, who refused to come back for The Five Doctors but fortunately came back for the 50th anniversary episode, The Day of the Doctor; and Paul McGann.
Now, we all know both have been prolific in other mediums. But McGann only showed his face in The TV Movie (1996), and The Night of the Doctor (2013).
That doesn’t stop peoples of the universe from speculating that McGann would come back, pretty please, at every opportunity. Or, specifically, at the following opportunities. Here are just a few times the Eighth Doctor definitely didn’t return to Doctor Who. In 2005, Doctor Who came back, although you might not have noticed this because it was a fairly small event which wasn’t accompanied by much fanfare at all.
Russell T. Davies was in charge and it was wonderful. I think we can all agree that. (I know, I know; we can’t all agree on anything ever.) It has thrills, spills, anti-plastic, Billie Piper, a mermaid-pig, the Mighty Jagrafess of the Holy Hadrojassic Maxarodenfoe*, anachronistic rapping, an evil politician, and Paterson Joseph moaning he didn’t get money. Doctor Who Series 1 basically had it all.
Except Paul McGann. Where the heck was he?!
Instead, they got this young upstart called Christopher Eccleston, a Northerner whose only previous acting work was in film, television, radio, and theatre. Bloody rookies, coming in here, stealing Paul McGann’s job.
McGann has since said he absolutely would’ve returned to the role, if Russell The T had asked him to. But that call never came. So audiences weren’t treated to the would-be-iconic phrase, “lots of planets have wig-makers.” (Matt Smith reportedly refused to say this line in The Time of the Doctor as well, namely because it hadn’t been written into the script, and was never part of the production process at all.)
Davies likely didn’t approach McGann again – although he does apparently enjoy The TV Movie – because he felt the 2005 show should feel like a fresh start. Series 1 was largely bereft of allusions to what had come before: the Ninth Doctor was still suffering the effects of the Time War, but this was never part of the 1963- 89/96 programme.
Still, it would’ve been nice to see the Eighth Doctor again; indeed, previous incarnations of the Doctor weren’t seen at all until 2008’s The Next Doctor, which featured flashbacks as part of the Cybermen’s infostamps.
*It’s been a while since I wrote the Jagrafess’ full name, so I checked I had spelt it right by copying what I’d written into Google.

Of all the words I could’ve misspelled, “Holy” wasn’t the likeliest option…

I distinctly remembering speculating about Paul McGann’s return in 2011. It never happened. You might’ve realised that because it’s included in this article, and you can probably remember 2011. It was just after 2010, but crucially before 2012. You were sober for 4 days, so I don’t know, maybe you don’t remember 2011 much. Needless to say, 2011 happened.
However, Paul McGann’s return didn’t. We’ve been over this.
So why on Earth did I think McGann might be back in The Doctor’s Wife? You can insert your own gender-swapping jokes about the Eighth Doctor here, but identity politics these days will mean people will jump on you faster than Brian Blessed on a trampoline.
It wasn’t just my inconsequential ramblings either – I spread my theories online. And as we all know, online ramblings aren’t inconsequential in the slightest. Just ask President Trump. This was back when I’d just started at The Doctor Who Companion‘s precursor, Kasterborous (say it three times, backwards in Welsh, while looking in a mirror, and your large intestine will be infected with malware). Yet I was confident enough to throw mad theories into the mix, right from the off. Clearly, I had a word count to reach. The idea that Paul McGann would be back was based on the Doctor Who Series 6 trailer, which offered a brief glimpse of the scene from The Doctor’s Wife in which the makeshift TARDIS materialises in the old console room. Here, I posited that the Ninth and Tenth Doctor’s TARDIS interior could’ve looked the same with the Eighth Doctor at the helm, albeit during the Time War, not circa The TV Movie. Ergo, the Eighth Doctor was probably making a comeback.
Despite what the threatening letters said, I wasn’t the only one with this theory. Oh no. In fact, I’m pretty sure I was merely regurgitating the not-inconsequential ramblings of Reddit.
It was always unlikely, but then so was the return of the Macra. Imagine if Paul McGann had filmed a few scenes as the Eighth Doctor and the production crew had somehow managed to keep it quiet from the press! I mean, as if…!

3. The Name of the Doctor

Actually, most of the Eighth Doctor’s most notable non-appearances came under Matt Smith’s reign as the Eleventh Doctor. That’s because this was the heady time before we learnt that the moon’s a giant self-replicating egg. This certainly wasn’t the heady time before Twitter, however, which debuted online in the year 140AD, hence the character limit (although a small group of society didn’t discover it until 280AD. Boom. Niche social media reference).
And so Twitter exploded when John Hurt turned around and the TV announced him to be the War Doctor, despite the Doctor emphatically noting that he wasn’t the Doctor. This was the heady days of the 50th anniversary and my goodness we were excited.
But I tell you who didn’t turn around. Paul McGann. Every now and then, I get a little bit lonely, and he’s never coming round. Of course, there are many people who didn’t turn around: Chris Hemsworth; Cher; Gyles Brandreth; Maxwell J. Hastings of Gloucestershire Road, Cheltenham; Mel and Sue; Pigbin Josh; Mary Beard; the President of Peru; Gary Barlow; Aswad; Sonia from EastEnders, blowing her trumpet; Asterix the Gaul; Lassie; Phil Neville; the complete cast of Class; the Green Cross Code Man; Keavy Lynch from B*Witched; Clippy the Office Assistant; Judge Judy; Walther Müller; and two or three others who I won’t mention right here for fear of these suggestions becoming ridiculous.
While it would’ve been nice to see Gyles Brandreth unveiled as the Doctor during the Time War – he’d win that war and the Time Lords would be left with some absolutely corking jumpers –  it would’ve been even better had we seen Paul McGann. Instead, we were left with some rabbit-eared bloke who had won four BAFTAs, a Golden Globe, and the BFI Fellowship. Doctor Who fans have the worst luck evah.
Apparently, Steven Moffat thought about inviting McGann back as the incarnation who fought in the Time War, but decided he couldn’t picture that version of the Doctor committing atrocities. He thought it’d be better if a new incarnation was shoved between McGann and Ecclescake, one who renounced the name/title/medical degree from Glasgow.
In a parallel universe, the Eighth Doctor returned, fought in the War, and renounced the name/title/medical degree from Glasgow in favour of the name, Marwood.

4. The Final Bit of The Five(-Ish) Doctors Reboot

Can’t blame him here. It was work permitting.

5. The Time of the Doctor Okay, so this is a bit of an odd one. Yes, only this one is the odd one – the previous inclusions are all perfectly reasonable.
And in 2013, it was perfectly reasonable to think that Paul McGann might’ve filmed a scene or 20 for Matt Smith’s swansong episode while shooting The Night of the Doctor. Seriously it was possible that, after regenerating in the craggy climes of Karn (try saying that backwards while sipping soup), the Eighth Doctor nipped over to Trenzalore to team up with the Eleventh.
We were greedy, is what it was. We had seen The Day of the Doctor, we had bathed in the beauty of Tom Baker’s return, and been startled by Doctor Who Live‘s link-up with One Direction. And we wanted more, more, more. We were ravenous beasts, and sometimes, ravenous beasts hallucinate and see something absurd in a promotional picture. David Attenborough always says that. It’s one of his catchphrases.
Specifically, fans saw the face of Paul McGann in the flames of a photo released to publicise the 2013 Christmas special. I know; it’s almost Shakespearian. But we did! In trailers, we even heard Peter Davison’s voice and were convinced Moffat had called in the Fifth Doctor to help out his future incarnation in the siege of Trenzalore. This was a slightly nutty time. Hysteria had set in. This was before our optimism for life had been ground into the dirt by Kill the Moon, Dark Water/ Death in Heaven, and much of 2016.
Looking back over the promo pics from The Time of the Doctor, it’s very clear that we’d lost our senses. Because it’s not obvious at all where Paul McGann could be hiding. It’s a bit like the Rorschach test, where if you see a screaming face in the ink, it means you were a French maid called Susan in a previous life (such is my understanding). If you look into the flames of Trenzalore and see the face of previous Doctors, it means you need more Vitamin C. 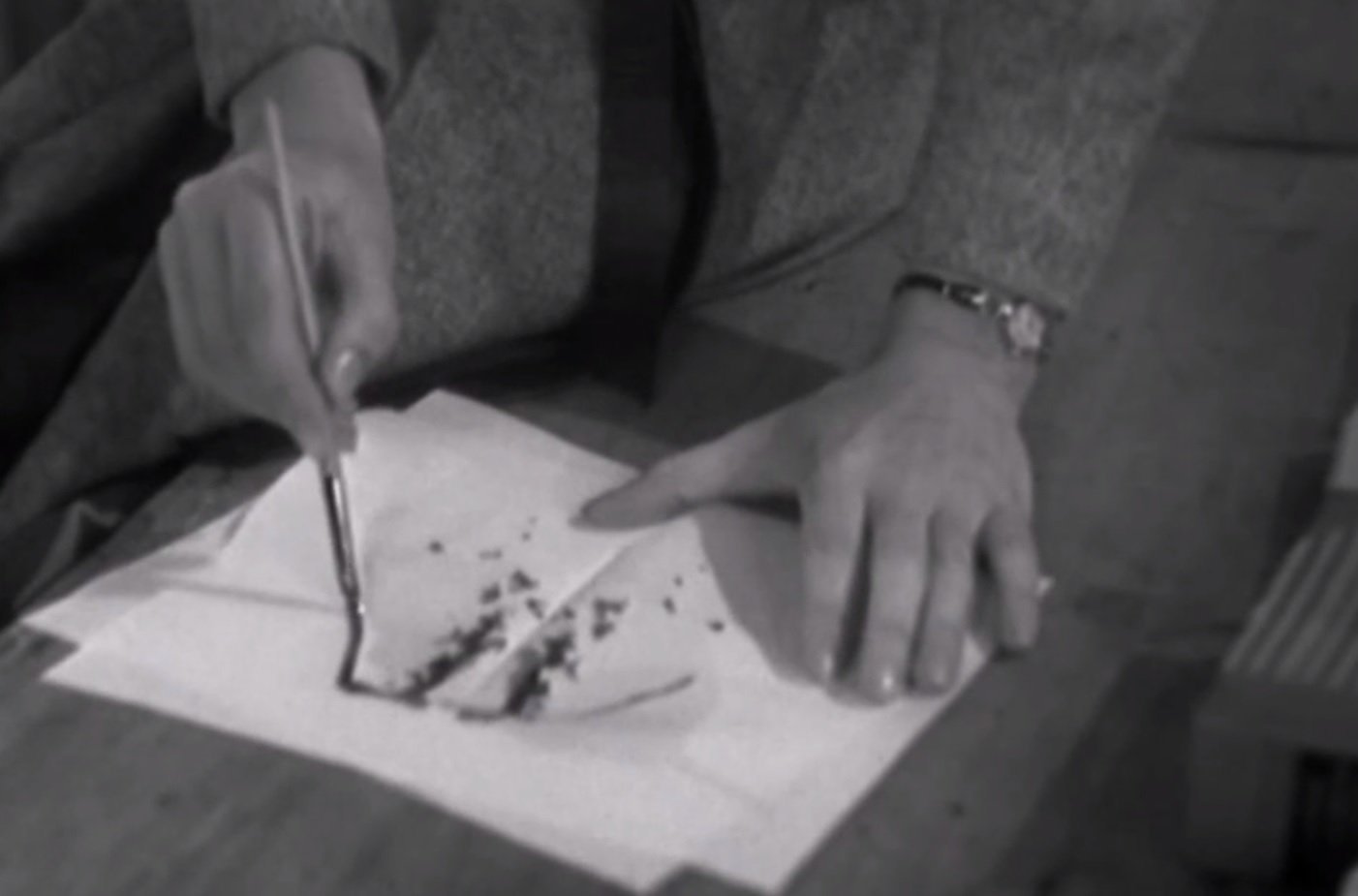 I distinctly remember reading about this theory on Kasterborous and thinking about how fandom had gone mad. Then I looked into the fire, and the fire looked into me, and by jingo, PAUL MCGANN WAS THERE. HE’S THERE. LURKING IN THE HEAT. THE EIGHTH DOCTOR CONFIRMED. THESE SHOES! THEY FIT PERFECTLY!
He didn’t appear in the 2013 Christmas special. Nor, indeed, in the 2014, 2015, 2016, and 2017 Christmas specials. If the production team for Doctor Who Series 11 releases an image of Jodie Whittaker amid facial fire, remember: you heard it here first.
Would The Time of the Doctor had been better if it had featured previous incarnations of the Doctor? Well, no offense to Paul McGann, but no. It’s a gorgeously sad and sadly gorgeous episode and anyone who disagrees can go suck a satsuma.
And so those are just a few times Paul McGann didn’t return to Doctor Who. The lesson we must all take from this is, life can be a bitter disappointment. Fortunately, The Doctor Who Companion is here to point this out. Now, cheer up and watch The TV Movie again, you grumpy beggar.

by Philip Bates time to read: 7 min
Features False Dawn: Remembering The TV Movie (And What Cou…
Features The Almost Brilliance of Scherzo
0
%d bloggers like this: