The Death Zone: The Name of the Doctor

Come from far and wide and witness the terrifying Death Zone! After the destruction of Gallifrey (cough cough), the DWC rescued the combat area from the clutches of the Time War and now it houses our flotsam and jetsam.
You know Room 101? Where we banish things we don’t like? This is our version, where we take three fans with grievances about Doctor Who and argue about what deserves our derision.
And then it’s over to you, dear readers, to decide which of these three things should be banished into the Death Zone. Today, as it’s War Doctor Week, the topic is this incarnation’s debut episode, The Name of the Doctor… 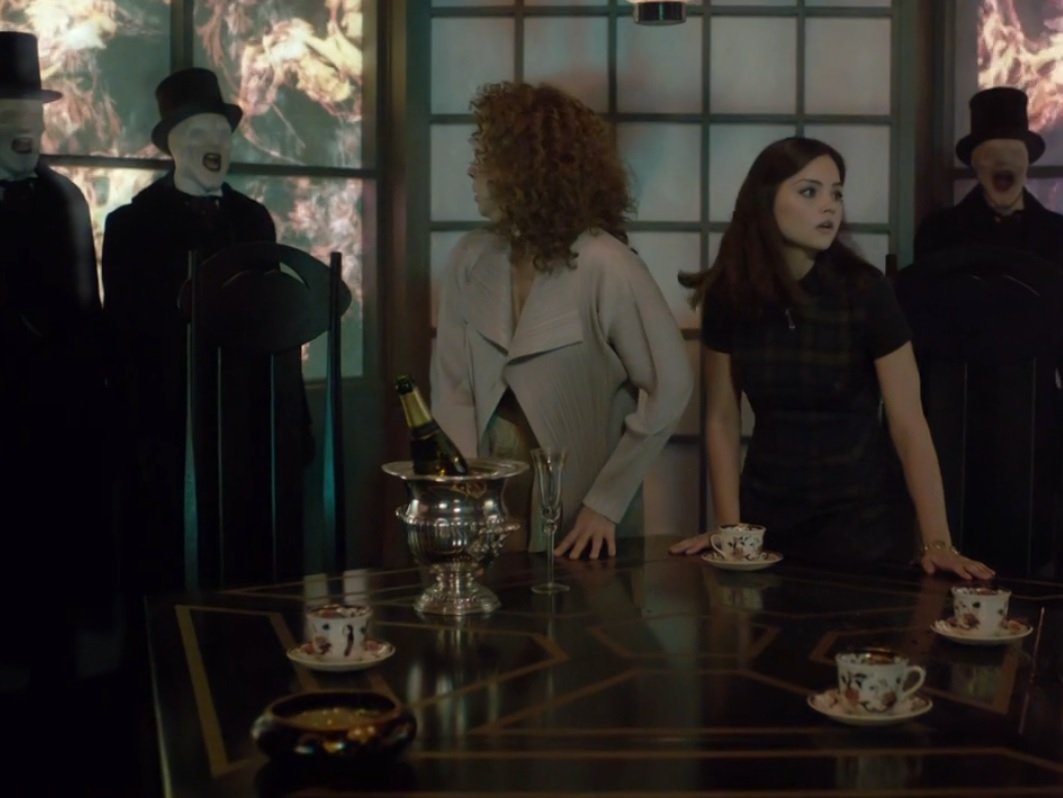 When asked in 2013 why he created the Whispermen, the faceless goons in The Name of the Doctor, Steven Moffat responded “having brought back two of the classics, the Ice Warriors and the Cybermen, this year we wanted a brand new monster to create chills in the finale.” Now, we have no way of knowing for sure where the drive to create more monsters came from. It could be from the powers that be at the BBC, or Moffat himself feeling pressured to capture lightning in a bottle. But everyone’s allowed to have a misfire now and then. Hence the Whispermen. They’re only in this one episode, and they’re just sort of…there. (Even in places where it doesn’t make sense, like the cross-time dream conference call.) They wear top hats, have no eyes, and use rhyming couplets for no clear reason.
That’s the problem with the Whispermen, isn’t it? Their creation wasn’t organic. It came from cynical desires to create another popular monster, not something that would make a point or serve as a way to tell the story. Moffat struggled with this throughout his time on Doctor Who. He got it mostly right with the Weeping Angels (once); for good or for ill, the Angels resonated with people and helped to make Moffat the next choice for showrunner back in the day. Then he followed those up with the Silence (Silents?), another gimmick monster, and it became clear that this was Moffat’s specialty. But the classic monsters are classics for a reason: they have strong storytelling potential, and attributes which people can relate to or understand.
Take the Daleks, for example. They’re well-known Nazi analogues, an embodiment of the idea that the drive for genetic purity can lead to evil, despicable acts. The Cybermen were a cautionary tale about the danger that survival at all costs could strip away their humanity. We might not like these creatures, or want to be them, but we can understand where they’re coming from. We can learn which thoughts can lead to trouble. Parents can sit their children down and explain that the Daleks are based on the Nazis and the very real atrocities they committed. What kind of discussion would they have about the Whispermen? “It’s very important that you avoid rhyming couplets, and being a vessel for a manifestation of intelligence. Maybe stay away from undertaker outfits.”
Normally in Room 101 – sorry, the Death Zone – we ban a concept in the hope we’ll never see it again. But in this case, we don’t need to. Even Moffat seems to have realised it was a bad idea in the first place.
Or, in rhyme form:

“What do we think about the Whispermen?

They can eff off, and hopefully we’ll not see their like again.” 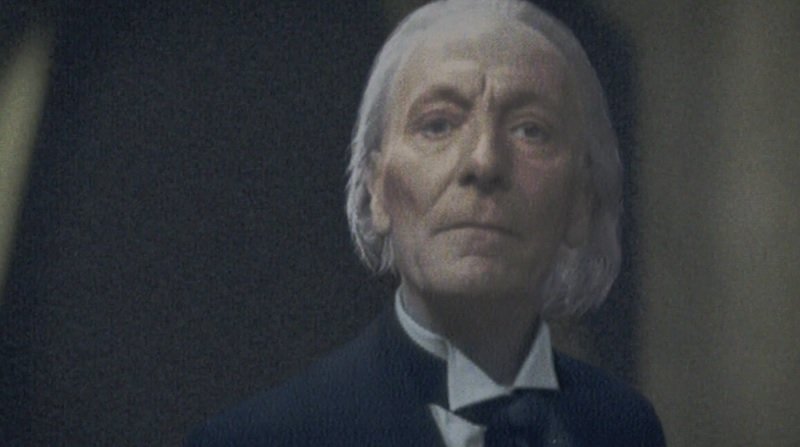 It was a wasted opportunity.
That’s what annoys me about The Name of the Doctor. Never mind that it spoils its own surprise by showing Clara meeting all the previous Doctors in the cold open, the execution is just plain shoddy.
There. I said it. Shoddy.
This could have been glorious, but instead they went with an idea from the guy who would later suggest nine extras from Rose rather than a little bit of CGI. He’s probably the same guy who used two versions of the Seventh Doctor during the freezing of Gallifrey.
But I digress.
It’s not just that inserting Clara in looks as if it was done using the special effects of the time, although that in itself is grating; it’s the choice of scenes that annoys me. Surely there were some scenes that would have allowed better integration. Annoyingly, the one that works best for me is the Sixth Doctor one, which is blatantly someone else in a dodgy coat and a wig. That approach works much better than it did in Time and the Rani, though I’m presuming it wasn’t Sylvester McCoy this time around.
The Fifth Doctor one feels like they were running out of budget and who thought that that scene from Dragonfire was the one that fans were clamouring to see from the Seventh Doctor?
The whole thing isn’t helped by the fact that Paul Cornell did it so much better in Timewyrm: Revelation. Paul was the first person to posit that all the previous Doctors existed somewhere in the Doctor’s mind and retained their individuality – not only that but he had Ace interacting with the various Doctors. Sound familiar? Not only was he first, but he proved that you can do more in books than you can do on screen, so of course I was disappointed.
I know that not everyone has read Timewyrm: Revelation; they’re usually put off by the fact that the first three books in the Timewyrm cycle aren’t the best. But I have and, damn it, it was my frame of reference for how the Doctor’s mind works.
And this is without even touching on how the Doctor’s body is essentially a mix of the Relic from Alien Bodies and the Doctor’s biodata from Unnatural History. Oh, please don’t get me started on that… 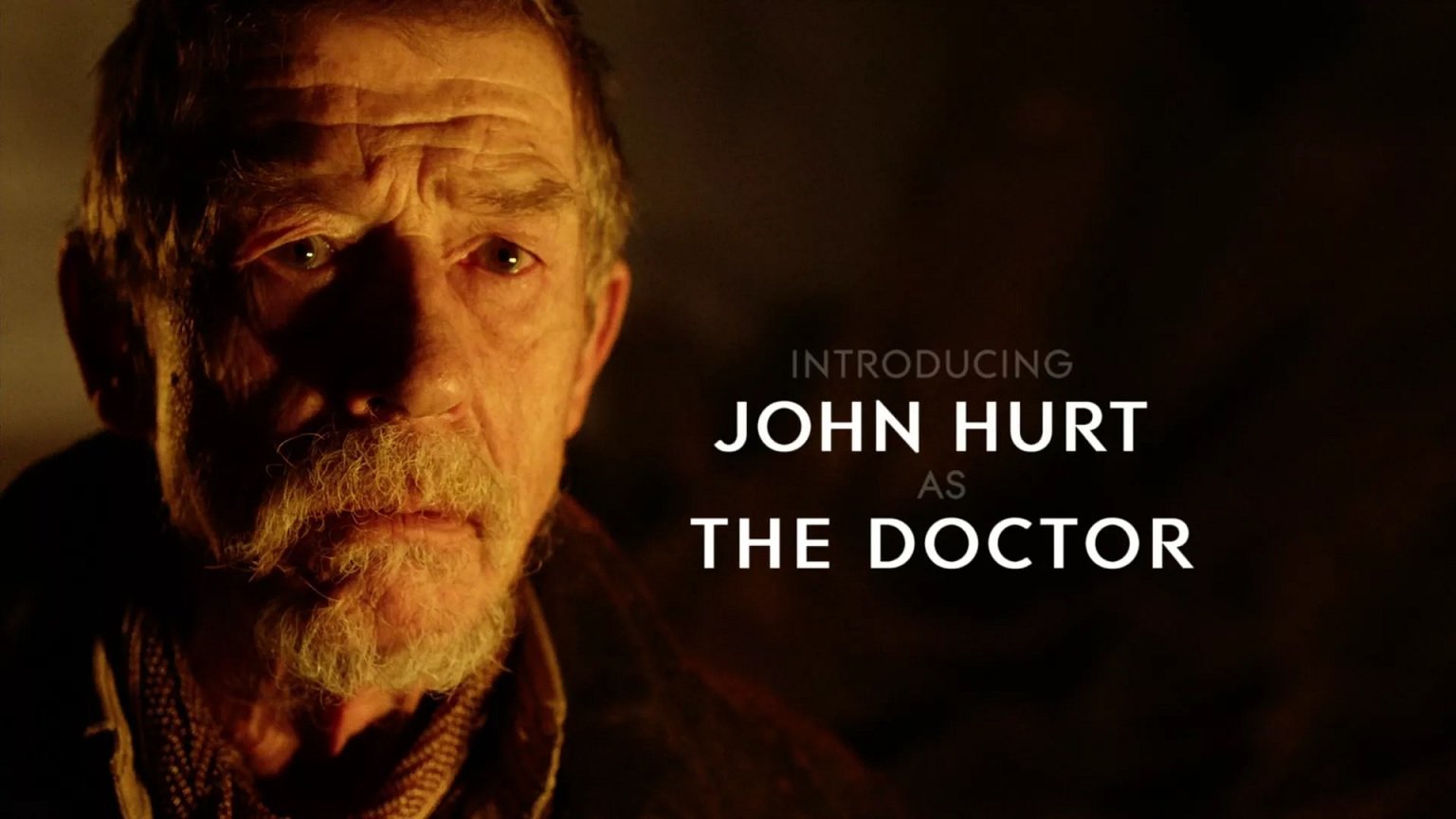 What he did, he did without choice. In the name of peace and sanity. But not in the name of the Doctor. Just don’t tell the chaps who created the caption that read, quite definitively, “INTRODUCING JOHN HURT AS THE DOCTOR”. Crikey. Talk about spelling it out.
Look, I get it. Doctor Who caters for all sorts, and some people won’t have the mental capacity to make the link that this previously-unseen fella was the Doctor (despite the Eleventh Doctor’s earlier assertion that “I’m everywhere. You’re inside my time stream. Everything around you is me.”) But c’mon, let’s be reasonable here. The majority would’ve got it. Many would’ve just gasped because it was John Hurt, that legendary actor finally in Doctor Who, even if they hadn’t realised who he was playing.
And it makes a great cliffhanger anyway. The mystery of it is enough to generate more interest in the 50th anniversary special (as if more excitement were needed).
It partly annoys me because it’s claiming he’s the Doctor, in spite of the fact that his whole existence is due to him not calling himself the Doctor. At the very least, they could’ve added a question mark. That’s more fitting for Doctor Who, right? I’m equally annoyed that this caption was added on screen. The only time this sort of thing happens is in the credits, announcing a new incarnation at the end of the regeneration story. When Christopher Eccleston changed into David Tennant in The Parting of the Ways, the regeneration energy didn’t morph into text that read, “AND INTRODUCING THAT BLOKE FROM CASANOVA AS THE DOCTOR”.
It’s semantics, I know. The drama was all there, and this is just a little niggle. But y’know what? I’m a writer. Semantics is what I do. It’s what the Doctor does too. He uses words to change everything (or failing that, he blows something up).
So, in the words of the Fifth Doctor, there should’ve been another way.
And now, it’s over to you!
Which of the above three should be banished forever? Which makes you giddier than the dimensioning forces deep within the TARDIS? Which makes you want to run, you clever boy, and never remember? Which should be buried in the DWC’s own version of Room 101?
Vote in the poll below to have your say. The poll closes in a month’s time.

This website uses cookies to improve your experience while you navigate through the website. Out of these, the cookies that are categorized as necessary are stored on your browser as they are essential for the working of basic functionalities of the website. We also use third-party cookies that help us analyze and understand how you use this website. These cookies will be stored in your browser only with your consent. You also have the option to opt-out of these cookies. But opting out of some of these cookies may affect your browsing experience.
Necessary Always Enabled
Necessary cookies are absolutely essential for the website to function properly. These cookies ensure basic functionalities and security features of the website, anonymously.
Functional
Functional cookies help to perform certain functionalities like sharing the content of the website on social media platforms, collect feedbacks, and other third-party features.
Performance
Performance cookies are used to understand and analyze the key performance indexes of the website which helps in delivering a better user experience for the visitors.
Analytics
Analytical cookies are used to understand how visitors interact with the website. These cookies help provide information on metrics the number of visitors, bounce rate, traffic source, etc.
Advertisement
Advertisement cookies are used to provide visitors with relevant ads and marketing campaigns. These cookies track visitors across websites and collect information to provide customized ads.
Others
Other uncategorized cookies are those that are being analyzed and have not been classified into a category as yet.
SAVE & ACCEPT
The Death Zone

The Death Zone: The Name of the Doctor