This September, River Song goes forth with the Fourth Doctor in another collection of time-bending adventures in The Diary of River Song – Series Four.
When River Song (Alex Kingston) visits a place where time has vanished, a genie escapes its bottle…
The Discordia are freed – nihilistic time pirates, in devilish form, altering the past to make sure they never lose.
This time, River may have met her match. And involving the Doctor (Tom Baker) can only make things worse… 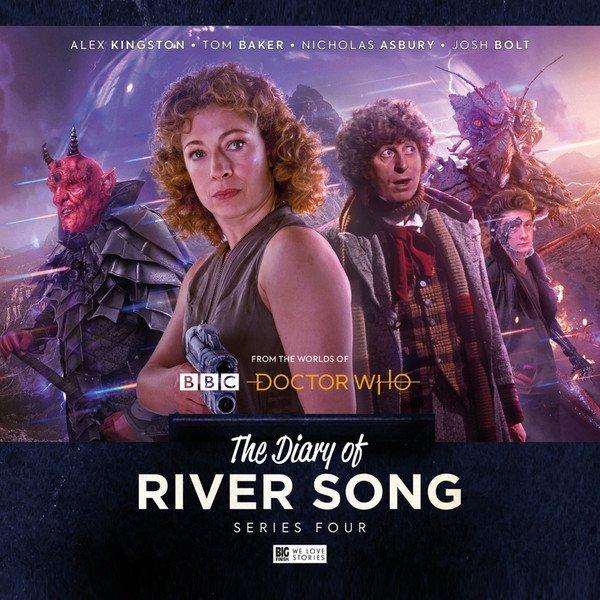 The new diary entries are:
Time in a Bottle by Emma Reeves & Matt Fitton
River is recruited by a rival to explore a star system where time no longer exists. Professor Jemima Still has picked up a signal from an impossible source and takes an expert team to investigate. But their mission is about to unleash hell upon the universe…
Kings of Infinite Space by Donald McLeary
With the Discordia on their tail, River and her friends run for their lives across time and space. But when your opponent can twist cause and effect to ensure victory at every turn, then escape may well be impossible.
Whodunnit? by Matt Fitton
Melody Malone finds herself in a Castle, with an assortment of strange companions. But guests are being murdered, one by one. Time is running out for a mystery to be solved. And Franz Kafka is hiding something in the attic.
Someone I Once Knew by John Dorney
River has tried in vain to keep the Discordia away from the Doctor. Now, as devils run riot through universal spacetime, her own past with her husband is being rewritten. There is one last hope for the universe. A love story – but one that must find an ending…
Explaining the development of the new villains, the Discordia, Script editor Matt Fitton told Big Finish:
“With no Time Lords to police things, the Discordia are essentially time pirates who can go back and re-engineer themselves and their evolution, to make themselves as intimidating as possible – and make sure they always win.
“They look like devils in the Hieronymus Bosch tradition, and they have rotating gun arms which spin around to whatever weapon the occasion demands.”
The Diary of River Song – Series Four is available for pre-order now for release in September at £23 on CD or £20 on download from Big Finish.

by Andrew Reynolds time to read: 2 min
News Has Doctor Who's 2018 Christmas Special Been …
News David Tennant and Peter Davison Join The Line Up F…
0
%d bloggers like this: