BBC Confirm Doctor Who Series 11 Will Air 'By October' The question of when we shall see Jodie Whittaker’s first season as the Doctor may have just been answered…well, sort of…

The official line on the air date of Series 11 has always been Doctor Who will return in the autumn – which means any date between 23rd September and 21st December – but, in the latest edition of the Radio Times, auntie Beeb has confirmed that the Thirteenth Doctor will now be with us “by October”.

That means you’ve got less of a wait than we previously thought. Doing a little bit of experimenting of our own, contributor Paul Cheesman has deducted that !mpossible Celebrities – the exuberantly punctuated quiz show that sees celebrities attempting to win members of the general public money by answering multiple choice questions – concludes its current Saturday night run on September 22nd – meaning that Doctor Who could slot back into its traditional Saturday slot on September 29th.

If the air date is that close then the ten-episode series would end close to Christmas Day, when a festive special will also air.

We won’t know for sure until the BBC confirm the exact air date but it does seem we will be getting the new series of Doctor Who sooner than we originally thought.

BBC Confirm Doctor Who Series 11 Will Air 'By October' 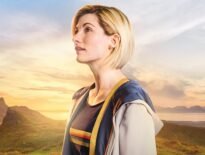