Who Will Matt Smith Play in Marvel's Morbius Movie?

Things are picking up pace for the upcoming Marvel-Sony movie, Morbius, as filming begins – and it looks like the Eleventh Doctor actor, Matt Smith will play a major role in the piece, as the villain of the film.

Morbius the Living Vampire, it could be argued, is something of an anti-hero anyway (or at any rate, not your traditional superhero lead), and Smith is reportedly set to play the antagonist, Loxias Crown. He’s described as “Morbius’ best friend who also suffers from the blood disease” which afflicted Michael Morbius. Morbius attempts to cure the disease, but, naturally, things go a tad wrong.

There isn’t a Loxias Crown in the source material; however, there is a character who sometimes goes under the alias Crown, but is better known as Hunger. He’s not a major player in the comics, but then again, neither was Riot, played by Riz Ahmed in Sony’s previous Spider-Man-related venture, Venom, so it’s entirely possible the firm is exploring the back-catalogue of characters.

The vampiric Hunger debuted in 1997’s Spider-Man#76, created by Howard Mackie and John Romita Jr., and made a handful of appearances in subsequent years (perhaps most notably on the cover of 1999’s Peter Parker: Spider-Man #7).

Meanwhile, Michael Morbius first appeared in The Amazing Spider-Man #101 (1971), and is played by Jared Leto in the forthcoming film.

Although Morbius is unconnected to the Marvel Cinematic Universe, we’re really hoping that this leads to more work at Marvel for Matt.

Morbius, which is also due to star Jared Harris, Adria Arjona, and Tyrese Gibson, is out in 2020.

Who Will Matt Smith Play in Marvel's Morbius Movie?

by Philip Bates time to read: 1 min
News DWC Readers Get 10% Off Tickets for Bedford Who Ch… 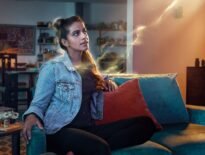