National treasure, Brian Blessed, has claimed that he declined a role in Doctor Who because he was too embarrassed to meet Peter Capaldi again after briefly hospitalising him in the mid-1990s.

Brian is, of course, well known to the British public from his roles in the film Flash Gordon, and legendary BBC television dramas, I Claudius and Z Cars, as well as for being an accomplished Shakespearian actor.

Doctor Who fans know him as King Yrcanos in the 1986 story, Mindwarp, in which he starred opposite Sixth Doctor, Colin Baker. Brian has also claimed for several years that he was offered the part of the Second Doctor in 1966 when William Hartnell stepped down.

According to Brian, he accidentally knocked Peter out during a fight sequence in The History of Tom Jones (which also featured Seventh Doctor, Sylvester McCoy). Brian recalls:

“When Peter was the Doctor, they offered me a part as some kind of vampire lizard creature. It was a Viking who was really a monster and sucked people’s brains out… But I turned it down because I couldn’t bring myself to look at him again since the day I punched his head.”

It’s easy to believe Brian could have done a fair bit of damage, as he’s a big man and quite the adventurer. He has tried (and failed) to climb Everest three times without oxygen and has successfully reached the summits of Mount Aconcagua in Argentina and Kilimanjaro in Tanzania. He is the oldest man to go to the North Magnetic Pole on foot and, on an expedition in Venezuela, even survived a plane crash. More recently, Brian has completed 800 hours of space training at Star City in Russia. As he describes the incident:

“We’d done this fight scene about 20 times for different camera angles… I was to give him a simple left hook to the side of his face, but on the 21st take did he not go and change direction and moved right into my fist… He went down and gave a death rattle. I was like, ‘Oh no — I’ve f***ing killed him’… He’s lucky because I managed to pull my punch at the last second, otherwise I really would have killed the poor b*****d as I’m 18 stone… After about a week he rang my house and spoke to my daughter. He told her, ‘Tell your dad I’m so sorry as it was entirely my fault’ — and it was. He shouldn’t have moved his head into my fist as I’m a black belt in judo and when I do a fight scene, I really throw myself into it.”

This might all be true, but it’s more likely that Brian is spinning us a tale. The more prosaic explanation is that he took the role but had to pull out (probably because of ill health). Whichever the case, it was Who’s loss. If you’d like to hear more tall tales, Brian is currently touring the country with his one man show, An Evening with Brian Blessed. 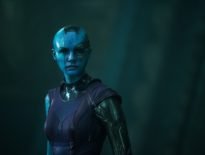