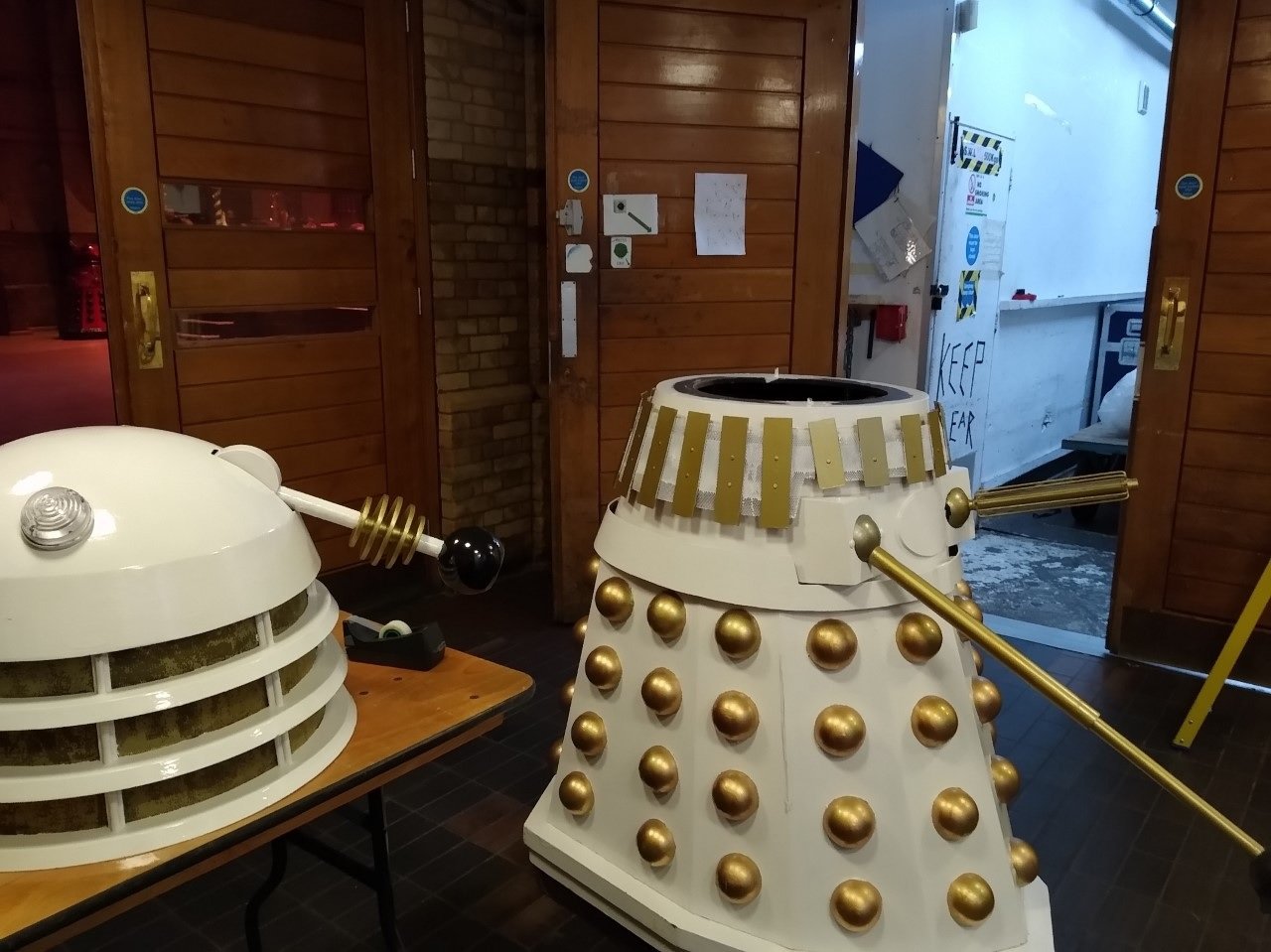 When many men hit middle age, they wonder what it’s all about. What’s life all about, eh? What have I achieved in my first 45 years? Silenced by this question, they decide they’ll learn to parachute or to buy a bright red sports car. A Whovian like me, however, might buy a full-sized Dalek. Thus I sent the midlife crisis packing. Learn from me, my friends.

I often think it’s unfair when people mock the middle aged for buying a sports car. Or a Dalek. So often, these objects of desire (and extensions of one’s personality!) have been longed for since youth, but it is only in middle age – when one has paid off the mortgage – that one might be able to afford such things. And the middle aged man becomes them well, does he not? What could be sexier than the sight of a grey haired geezer in a red, open top Spitfire – or inside a Dalek?

My Dalek was built by a freelance prop builder in Birmingham. It was a screen-accurate replica of a mark three travel machine, as seen in Genesis of the Daleks, but sporting New Who lights for some reason. It needed a name, so Emma, my wife, suggested Genevieve (from Genesis, see? Genesis – Genevieve). You can get inside Genevieve and trundle her around. She had a ring modulator, so you can squawk Dalek commands at people. Genevieve has lived in our kitchen for five years. In her first week, she gave the gas man a fright when he came to fix our boiler. A house rule, instantly ignored, forbade the hanging of tea towels on Genevieve’s sucker stick. Well, a Dalek has dignity, has she not? And standards?

Genevieve was perfect. And yet, and yet… Daleks love company. They yearn to share the pleasure of causing mayhem and exterminating with a kindred spirit who will appreciate such things. Genevieve, I mused, needed a playfellow. I found a man on eBay who was selling a half-finished new series Dalek for a reasonable price and I bought it. This would be the start of another middle-aged endeavour, the Project In The Garage – Restoration of the Daleks, if you will. A couple of weeks after the purchase, I plucked up enough courage to tell Emma that Genevieve would soon have a sister.

The new Dalek needed hemispheres, a dome, lights, a sucker arm, trimmings. These I supplied in best Blue Peter tradition from household artifacts. Two mops for the sucker arm, plastic bottles for the dome lights. The circular surrounds for the hemispheres proved a problem, eventually solved by the use of 45 cereal boxes: cut out 144 circles, glue the card together three ply, paint it black and – sorted. What to do for the mesh in the neck? I remember reading that Mike Tucker had had a similar problem when designing Dalek. Going swimming one day, he noticed the mat at the entrance to the pool: a raised grille, perfect for the Dalek’s neck. I used a couple of bathmats from Wilko, cut off the suckers and painted them black. The main dome and the body’s hemispheres were supplied by some chaps on eBay who offered Dalek parts for sale. Many happy hours in the garage, and some swearing, later, the new Dalek was finished.

What colour to paint her, though? I wasn’t sure that the bronze New Series livery would sufficiently disguise the domestic origins of her trimmings. I’d always loved the red Daleks in the Peter Cushing movies and the Dalek Supreme of The Stolen Earth, so I went for red. (What’s that you say? This colour choice was a manifestation of the repressed primary desire for a red sports car? What nonsense!) The new Dalek needed a name. Clementine fitted nicely: a name of the same vintage as Genevieve and recalling one of my heroes, Clement Attlee, the Labour Prime Minister from 1945-51, who was also red (come on, keep up). Unlike Genevieve, who had a body unit in one piece, Clementine’s body came in two halves. These tended to split open when one trundled around inside her, revealing the operator, and I eventually opted to leave her as a static prop. Clementine has always kept her livery but Genevieve underwent two further paint jobs as a Dalek Supreme (black and silver) and an Imperial Dalek (gold and white).

Genevieve and Clementine have made something like 20 public appearances between them, at book launches and readings, school fetes, two Ely Cathedral Science Festivals, and the St Alban’s Science Festival. They have danced to the Doctor Who theme, played by full orchestra, at Cambridge Corn Exchange and Ely Cathedral. I can fit one of the disassembled Daleks inside the family’s Volkswagen Touran, which makes it a simple matter to deliver her to an event. If both Daleks are required, then you have to hire a van. After loading my brother Simon’s Dalek into a van with Genevieve and Clementine after one of the excellent Bedford Who conventions, we observed that these three Daleks constituted a complete army for the invasion of other planets: see all Seventies Dalek stories.

I can stay inside Genevieve for a couple of hours, not least because I have a special compartment behind the seat for snacks and drinks. But not too many drinks, for obvious reasons. And being inside a Dalek means you are almost unaffected by rain.

Huge embarrassment of a franchise clash at school fete!

Sometimes being inside a Dalek isn’t fun. People who come to Who and science fiction events are almost always cheerful and well behaved, but this isn’t always the case with the general public. People don’t always remember that there is a man inside a Dalek and respond to you as if you are a prop. I once spent a miserable afternoon at a rainy fete, trundling around for hours while a gaggle of 12 year olds mobbed Genevieve shouting, “Oi mate are you a robot are you a Dalek are you a **** do you want a sandwich do you want some of my ******* coke oi mate are you ******* listening to me”: on and on and on and my minder, one of the fete’s crew who had pledged to keep an eye on me, was nowhere to be seen. The afternoon was crowned when, after six hours, I was packing up and a man wandered over with his two eight year olds. The kids climbed onto Clementine’s base, flipped at her lights and sent them flying, laughed their heads off, and then tipped open the dome. I leapt across the playground and caught it just before it crashed to the concrete. Then I remonstrated with the father. “They are children,” he protested, “that is what children do. They like to explore things.” I suggested that he should teach them to have more respect for other people’s property and that they shouldn’t think the only way to enjoy something is to break it. “If that’s your attitude, you shouldn’t bring those things to a children’s fete,” said the man. When I told the tale to Emma, she suggested that I didn’t take the Daleks to events with the general public unless I was very sure they would be well received. Good advice, which I have followed.

Clementine at the Cambridge Corn Exchange

Children usually love the Daleks. One exception was when a concerned parent sidled up to Genevieve at a fete, to say that his toddler was very frightened and would I be very kind and show my face to reassure her. Happy to oblige, I lifted Genevieve’s lid and said hello. The toddler was reassured, no doubt by the notion that there was not really a hideous mutant inside the Dalek. (I know what you’re thinking and it’s not big and it’s not funny.) People usually beam at Clementine and Genevieve. Joggers interrupt their jogs to ask if they can take selfies with them. One January morning, I looked out of my window to see the wheelie bins lined up along our road, waiting for the dustman. I thought they looked like Daleks, so wheeled out the two Daleks to join the parade. The picture appeared in the local paper that week.

Daleks conquer and destroy, hang out in your kitchen, and go to school fetes.

Things that people say to you when you are inside a Dalek:

“Run up the stairs, then it can’t catch you.” (Ha ha, little do you know. Actually…)

“Is it a real one?” (Indeed yes. It is an alien death machine from the planet Skaro.)

I told Clementine that, if she wanted to hang out in our kitchen, she had to make herself useful

Things that you sometimes wish for when you are inside a Dalek:

(Mindful of Roger Hancock, Frank thinks he should make it clear that he never charges for public appearances by his Daleks and had not made any profit from them. He does, however, sometimes ask for a donation to Ely Foodbank and his travel expenses. All photos are copyright to Frank Danes; the picture of Frank lecturing at Ely Cathedral is copyright to Maryn Crawford.) 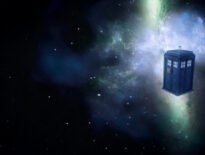 Features Faith in Relative Dimensions: How Might A Christia…