Only at the very end of the Torchwood Soho: Parasite boxset do you really appreciate how clever it is, as you’ve spent three hours half-laughing and half-immersed in the thrills of 1950s Torchwood and its jazz interludes.

The narrative cuts back and forth a lot, but it doesn’t lose its audience on the way as it usually only makes a jump in time to start a new episode or to avoid exposition. And it’s different – it’s soo different – from the usual Torchwood releases, yet it becomes familiar, as if it were the show on television years ago rather than a contemporary one set in Cardiff.

What also makes life a lot easier for first-time listeners to Torchwood set outside of 2000s Cardiff is that the big bad in this release is basically Nazis. A simple but effective choice because you don’t need to devote ‘screentime’ to Nazis for the listener to know how nasty they are and what they’re capable of.

The Man from Room 13 kicks off the boxset, and focuses on the key to any Torchwood team – a flamboyant LGBTQ+ character who is an irresistible presence in any scene he appears in. Get out of the way, Captain Jack Harkness: Norton Folgate is back!

Samuel Barnett as Norton works incredibly well with Tom Price’s PC/Sergeant Andy Davidson, and this partnership – that has already appeared in a few Big Finish releases – gets an enjoyable return in Soho: Parasite. For those who don’t already know, Norton is a (disgraced) Torchwood agent of this time period who, through various means, has appeared in modern day Torchwood stories as well as in Big Finish’s previous brief ventures into 1950s Torchwood. It’s safe to say he is an incredibly popular addition to the franchise.

And if you also didn’t know, Sgt Andy has gone through a lot of character development in recent years and now has access to a vortex manipulator that can take him back to the 1950s.

Andy doesn’t appear in episode one, which focuses on what Torchwood got up to in London in the middle of last century. It’s fast-paced, yet heavy on information, and introduces many new characters but none of it feels rushed.

While Norton doesn’t get held back much by his homosexuality, the other key characters certainly do feel the limitations of the time period. Gideon Lyme (Joe Shire) is an investigative reporter whose skin colour and immigrant status holds back his career until he finds out enough about Torchwood’s activities to pitch an incredible story, and Lizbeth Hayhoe (Dervla Kirwan) is an intelligent superior of Norton’s who should be Torchwood’s leader but isn’t purely because she’s a woman. As one character says: “No woman has had an idea a man hasn’t proved by repeating it louder”.

Room 13 is basically where Torchwood’s unwanted agents are put to work; no ground work for them, yet Norton still ends up in an incident that involves a B-movie monster, a centuries-old woman, the smuggling of illicit goods on Britain’s coasts, and lots of fire. And this is all in the first of the six half-hour episodes.

This excursion is expanded on through the rest of the series, as is the persistent fog that sits heavy on London’s streets. The most important thing to take away from the series opener? You don’t need to have listened to the previous adventures of Norton, or even much of Big Finish’s expansion of the Torchwood universe, to enjoy this release. Especially as it has jazz interludes between scenes. Where else can you find that?

Episode two is called Meet Mr Lyme, and does just that as it fleshes out his origins and motivations, and adds more mystery as his newspaper employer is open to looking past his own racial prejudice because Gideon Lyme’s wages will be paid for by the George Ezra Fund. I don’t remember George Ezra being around in the 1950s.

It starts to become clear how the series will overlap with itself in its narrative structuring and use of time, with the end of the first episode basically being repeated here. Andy also makes his entrance, with great style. The combination of Andy, Gideon, and Norton is clearly bringing great joy to the actors involved, and in The Mould they encounter the threat that changes this series from a mystery to a full-blown alien invasion.

Of course to say any more about the plot past this point would give too much away, but once you know what the Nazis are up to, things escalate pretty quickly and it manages to fit every aspect of ‘classic’ Torchwood into a series that really is set in a classic era.

Everything is tied up nicely, and chaotically, in the final episode and the door is left open for more 1950s Torchwood shenanigans. Which this reviewer would wholeheartedly sign up for.

Torchwood Soho: Parasite is out now from Big Finish. 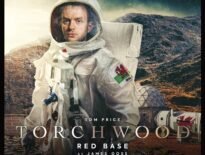