Mandip Gill: Yaz’s Mental Health “Will Affect Her Choices” in Doctor Who Series 13 It sounds like Mandip Gill has confirmed that her Doctor Who character, Yasmin Khan, will stay on for Series 13, saying that Yaz’s mental health will play an important part in the companion’s arc.

Khan’s mental health was first explored in Series 12’s Can You Hear Me?, and Gill says:

“Chris [Chibnall, showrunner] had phoned me and said ‘We’re going to delve into Yaz’s backstory and we’re going to look at mental health issues’. So obviously as an actor, for me that’s… I don’t want to use the word exciting, but it opens you up to loads of things.”

She’s been doing her research to play this aspect of the character too. She went on:

“I didn’t [draw on my own experiences], it’s just not the way I work as an actor. But I did work closely with MIND charity and we were able to ask lots of questions, like how would people react in certain situations? And maybe why Yaz hadn’t mentioned it running up to this, and why she’d gone to her sister and not her mum – because she’s obviously very close to her mum.

“For me, I’m really glad I got to play that part. And it’s part of Yaz’s journey now. It will affect, basically, her choices in the future.”

Many had presumed Gill would stick around for the next series, but the BBC is yet to confirm anything. We wouldn’t be surprised if at least one companion leaves in the special, Revolution of the Daleks.

The next episode of Doctor Who is expected to air sometime over the festivities.

Mandip Gill: Yaz’s Mental Health “Will Affect Her Choices” in Doctor Who Series 13 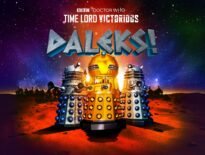 News Here’s Our First Look at the New Daleks! Ani…