You may not be able to go to the theatre right now, but you can still settle down by your household heating appliance and listen to a good old ghost story delivered by the Torchwood Institute. Or enjoy The Crown. Or in Torchwood’s case, both.

All good ghost stories are set in Victorian times, and so we head back to the era of the institution’s founding to see Queen Victoria being a ghost of herself in an asylum. Why is she like this, given she is the monarch and the most powerful lady in the world? It is because she’s been to Norfolk. Beware what lies east of where the M25 is today.

It’s a wet Christmas Eve, and distinguished fellow Doctor Gideon Parr has been called upon to observe and speak to a clinically insane asylum patient claiming to be Queen Victoria. For such an unthankful task at such a festive time, he has to leave his nervous wife at home. But of course for a Victorian gentleman, work must come first.

Parr isn’t really swayed by Victoria’s tale of how she arrived in an asylum, played out as several flashback sequences, and I don’t blame him because if someone who believed they were Queen Elizabeth rocked up at my local doctor’s surgery today, it would take a lot to convince me they are who they say they are. And with Big Finish having recast Victoria with Rowena Cooper, after Pauline Collins played her in Tooth & Claw on television, it means you have a handy in-universe explanation for anyone thinking her majesty sounds a little different to usual.

At first the persistent use of ‘we’ as royal custom rather than ‘I’ does make you think some collective alien intelligence has possessed Victoria, until you realise it is really just the way the Queen speaks. Frequently chastising Dr Parr and asylum worker Maddox for talking about her as if she is a lunatic while she’s still in the room shows very much that her majesty is present.

The Norfolk link is because that is where the Royal Sandringham estate is, and it means Torchwood gets to do its brilliant job of combining the urban horror with the unsettling space of rural folklore. In this case, Victoria is cursed by a young woman she meets while roaming her grounds. The curse of the crown, rather aptly.

The folk-horror influences that are always strong when Torchwood encounters people from ‘the village’ is brought back into the rest of asylum-based proceedings as the curse takes on a physical form to strike fear into those who encounter it. And piece-by-piece, the plot starts to emerge and you really feel like you’re in a Torchwood adventure just as Victoria recounts how she has faded into obscurity and eventually been locked up.

It’s amazing how Torchwood can go across eras but still feel like the same show when it has a strong core cast and a base of operations; when the Institute shows its hand late on, it’s definitely a crowd-pleaser and makes Cooper’s performance as Victoria all the more rewarding. And the door is left open at the end for a follow-up story on the curse.

Watch out for the green Ferryman, who’s always just out of sight, and press play on your CD of The Crown, on this cold winter’s night.

Torchwood: The Crown is available from Big Finish now. 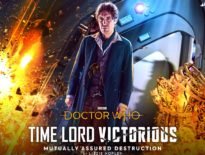