It seems as soon as you leave Doctor Who, people want to know when you’re coming back. Barely a week goes by without Billie Piper, Freema Agyeman, or Alex Kingston being asked whether they would like to return. Carole Ann Ford was even talking about it not that long ago. Invariably the answer is no, sadly.

There’s always an appetite for returning actors. Most of them have gone on to work for Big Finish, so they all seem quite eager to play the characters again. John Barrowman is the most recent actor to come back to Doctor Who on television, setting a new precedent for characters being used by Big Finish and the BBC at the same time (although maybe Peter Davison started that).

Latest in the firing line of rampant sepculation is Catherine Tate. This time, however, there is some evidence. Ish. She and the TARDIS were apparently in the same city at the same time.

Filming for the new series is currently underway in Liverpool, presumably because of new Scouse companion Dan, played by John Bishop. Tate was reportedly seen there on the same day, fueling the possibility of Donna returning, even though her head is supposed to explode if she ever remembers her time with the Doctor.

Someone asked Tate why she was in Liverpool and she replied that she was filming something she could not talk about due to an NDA. No, not a New Doctor Adventure for those of you who thought it was a novel line abbreviation. NDA means Non-Disclosure Agreement.

A ginger woman was also seen during filming on Doctor Who… although onlookers have since confirmed it wasn’t Tate.

Is Jodie Whittaker going to meet the universe-saving temp? Is another three person TARDIS crew on the table? Is Catherine Tate just filming a new sitcom in the same city?

Please excitedly theorise in the comment below until we are all ultimately disappointing that out very specific ideas do not come true. 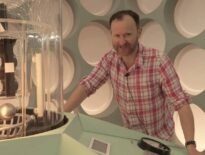 News Would Mark Gatiss Return to Write for Doctor Who?…