Doctor Who fans have always been a creative bunch, using their skills to make their own artwork, stories, and videos, often raising awareness and much needed funds for good causes along the way.

Peter Trengove, from Woolston in Cheshire, has been making films since 1996 and has used his time in lockdown to create Doctor Who-themed videos which tell the story of living with Cystic Fibrosis (CF). He was diagnosed with the condition at birth and was keen to use his film-making to explain how a medical breakthrough has led to significant improvements in his health.

‘‘This led me to the story of Master of Deception, which tells what life would be like for the CF community had the CF gene not been discovered resulting in life saving treatments that help control the symptoms of CF.’’

‘‘The film is an example of the importance of research needed for CF for making better treatments and hopefully one day a cure.’’

Peter has won praise for the way he has continued making videos and involved others in his work despite the limitations of shielding and inability to mix with people. Other actors have recorded their own footage at home for use in the videos.

His latest instalment, Master of Deception, can be found along with earlier films on his You Tube channel. A nice demonstration of his love for the series and his passion for film-making, it’s notable for (among other things) a neat use of the Gallifreyan seal in the title sequence and a new incarnation for the Master. 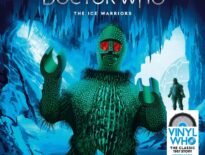