Would Christopher Eccleston Record a Multi-Doctor Story for Big Finish?

Could the Ninth Doctor meet another incarnation of the Time Lord for a multi-Doctor story?

Next month, the Ninth Doctor – played by Christopher Eccleston – will return for new audio adventures, released by Big Finish. Naturally, thoughts turn to what this range could add to the Doctor Who canon; it’s already been confirmed that the Ninth Doctor will meet the Cybermen, which he never did on TV, and the Brigadier, this time played by Jon Culshaw.

But most tantalising is the prospect of a multi-Doctor tale. Sure enough, Big Finish executive producer, writer, director, and voice of the Daleks and Cybermen, Nicholas Briggs, has teased that it is a possibility — albeit one not currently on offer:

“I think meeting other Doctors, that’s a whole different thing – but I think it would be wonderful and fingers crossed maybe one day we could do it!”

It would give us a new side of the Ninth Doctor to explore. In our exclusive interview with Eccleston, he enthused:

“I feel like within the [Big Finish] module, there’s a great deal of conversation between – there’s the central hub, the team, and they draw the writers together, so there’s a consistency in the writing of the Ninth Doctor’s voice. But there’s also that great thing that you get from episode to episode where he’s stretched somewhat by the individual writer that keeps it fresh – both in the television series and in the audios – for the actor playing it. Because he is every one of us, I think. He belongs to everybody within that creative process. And that shape-shifting element to his persona is lovely.”

But which incarnation would we most like to hear the Ninth Doctor meet? The War Doctor might be interesting, seeing as the Ninth Doctor was reeling from the former’s actions? The Eighth? Because you have to wonder what the battle-scarred Doctor would tell the Time Lord on the eve of war. Or how about a nostalgia fest, with the Ninth meeting the Fourth Doctor?

Oh heck, whatever happens, we’re on board.

The Ninth Doctor Adventures begins in May 2021 with Ravagers and continues with three further volumes, to be released in August 2021, November 2021, and February 2022.

A version of our interview with Chris (and many more) appears in 100 Objects of Doctor Who, available now.

Would Christopher Eccleston Record a Multi-Doctor Story for Big Finish? 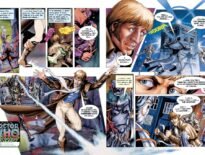