Following its release at the BFI in October 2020, a documentary about the life of a Doctor Who icon, Delia Derbyshire: The Myths & The Legendary Tapes is going to be available to watch on Sunday 16th May at 9.00pm.

The docudrama, written, directed, and starring Caroline Catz, saw the life of Derbyshire dramatized in much the same way the early years of Doctor Who were in An Adventure in Space and Time.

What makes it differ from that docudrama is how raw and powerful it feels following the tragic life of Derbyshire. It’s also very unusual with the film imagining Catz’s Derbyshire as a time-traveller, travelling back and collecting things from her past so we can see how it formed her life.

Born in Coventry in 1937, Derbyshire said that the sound of the bombs during the blitz played a big part in her love for music, finding the explosions almost rhythmical. Also included in the film is her original works; recently discovered in an attic, they were entrusted to Mark Ayres, who later digitised them.

Through that music, the film encapsulates the pain, happiness, and ultimate tragedy of her life. The Myths & The Legendary Tapes tackles the alcoholism that affected her life and played a part in her death in 2001.

Of course, Derbyshire’s arguably most famous score is that of the Doctor Who theme tune when she was working for the Radiophonic Workshop. It’s obvious to say that one piece of music still remains timeless; even after the last 57 years, the core of her score remains throughout all the different variations of the theme tune.

But a lot of her other work is also featured in the docudrama, restored thanks to the hard work of Ayres. Creator, Caroline Catz was immensely proud of her project which aired in October 2020 at the BFI. It has also gone on to win an award from the Adam Yauch Hornblower awards. These awards are dedicated to interactive film and music and given this documentary’s unique layout, it was inevitable it would gain some real praise!

Delia Derbyshire: The Myths & the Legendary Tapes will air this Sunday 17th May 2021 on BBC Four at 9.00pm as part of the Arena programme.

News Just What is Doctor Who: Time Fracture? 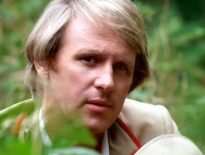