Both Doctor Who: Out of Time 1 and Torchwood: Tropical Beach Sounds and Other Relaxing Seascapes #4 have been acknowledged at the ceremony, being awarded a tie in the Best Audio Drama category.

The Scribe Awards celebrate excellence in licensed tie-in novels and audio dramas based on TV shows, movies, and games.

“It’s a real point of pride for all of us who work at Big Finish that we strive to make sure our scripts are top notch. We’re working hard to find new voices, but also making sure we don’t abandon those who have been with us for years, honing their craft and offering new, imagination-stretching, dramatic possibilities. Matt is one of our finest, who came to us through an entry in a script competition. Tim is one of our newer writers, although time flies and he’s been with us a few years now! Both he and Matt have such inventive, inspiring minds, so it’s extremely heartening to see them being so deservedly rewarded here.”

“I am so excited that two such different scripts have been honoured by the Scribe Awards.  A minimalist masterpiece and an all-out action adventure – this really shows the breadth of what Big Finish strives to create with our wonderful teams of writers, producers and directors.”

Out of Time 1 pairs Tom Baker’s Fourth Doctor with David Tennant’s Tenth Doctor and hurls them into the Cathedral of Contemplation, where an army of invading Daleks can only be repelled by utilising the ingenuity of two Time Lords – the same Time Lord!

“It is a huge honour to win a Scribe Award tied with such a brilliant fellow as Tim – our two scripts showcase very different ways of telling stories on audio, but still within the same universe! In difficult times, people rely on drama to escape and it was a privilege to bring together two of Doctor Who‘s most iconic stars to battle an iconic enemy. That we were able to make this production during lockdown shows the innovation and talent at Big Finish, and I thank the actors, musicians, sound designers and everyone working away behind the scenes. This is for everyone who’s kept on telling stories through 2020 and beyond.”

Torchwood: Tropical Beach Sounds and Other Relaxing Seascapes #4 invites listeners to sit back and listen to the legendary Sir Michael Palin, as he narrates the world’s most soothing yet deadly self-help tape.

“I’m delighted that Tropical Beach Sounds has lulled its way to victory with Sir Michael Palin’s dulcet tones, alongside the wonderful Matt Fitton’s Out Of Time. I’m especially pleased on behalf of the whole Torchwood team who have continued to make high-quality drama in these impossible times, so a special shout out to Scott Handcock and James Goss who make it all possible. Torchwood really is ‘The Little Range That Could’, encouraging deep character dives, knotty moral dilemmas and experimental storytelling. I hope this win is a testament to that approach.”

Other winners of the Scribe Awards 2021 include Star Trek Discovery: Die Standing by John Jackson Miller and the Blade Runner graphic novel by Michael Green and Mike Johnson. 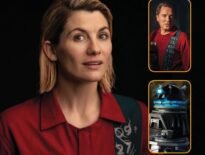