Reviewed: The Thrill of Going On Further Adventure(s)s with the Eighth Doctor and Charley 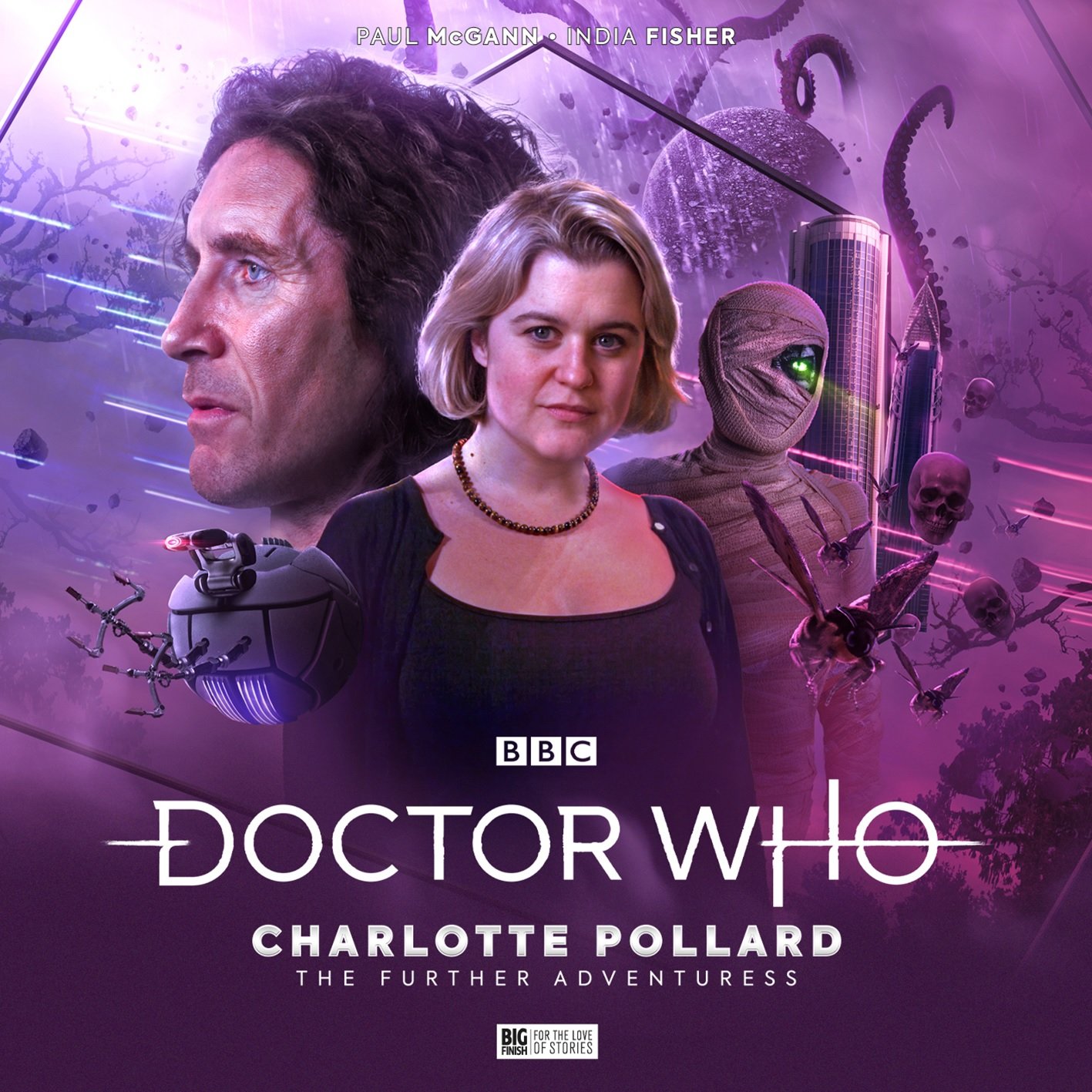 Charley Pollard: The Further Adventuress. A title and also, well, a title for the 1920s aristocrat-turned-time traveller. The Eighth Doctor’s first audio-exclusive companion returned for a full boxset of adventures in January of this year and it’s four episodes of fun, flirting, and further adventures.

The Mummy Speaks! is the boxset opener and is immediately a load of fun. In fact, it’s a right romp and it’s set in 19th Century France. At the centre of the tale is a mummy with a mechanical heart, much like the Foretold that the Twelfth Doctor faced in Mummy on the Orient Express, and just like that future foe, it is a thousands-year-old mission that the mummy is trying to complete

Each story is split into two episodes, and the first runs entirely through what could be the mummy’s entire story. But all is not as it seems, and the appearance of Charley at the scene of a murder means she ends the first episode awaiting the guillotine while the mummy ‘lives’ to see another day after being saved by the dying owner of a chateau where much of the action is happening in parallel.

Charley is remarkably calm on the block, and keeping her talking while she awaits her fate is as much a mechanism to reintroduce the listener to what makes her tick and the bubbliness of her personality (early in her travels with the Doctor). And she is then saved by one of the newest additions to the pantheon of Doctor Who companions. And I can’t spoil who that is.

The new addition to the central team works surprisingly well and on audio it’s maybe easier to make this believable in the writing than if this were on television — although it’s still requiring Alan Barnes to really know what he wants to do with his characters for the new dynamic to truly be functional.

This story is a pastiche of several eras at once, as it combines its French setting with Charley’s 1920s prejudices and 1950s British B-movie mummy horror. Those all gel nicely and create a very visual story, and the fact that Charley does hold certain prejudices still at this point in her travels makes her a flawed and therefore even more appealing character. It’s a great way to properly bring her back for a selection of adventures rather than just the one-off full-cast Doctor Who releases she’s appeared in since the end of her Sixth Doctor arc in 2009. It even goes a bit The Phantom of the Opera at the end.

Barnes actually created Charley, script edits this boxset, and provides an interesting behind-the-scenes interview about the character. Joe Kraemer, who did the music for the boxset, also shares interesting details about the release in his interview.

Kreamer’s work, and that of the sound design team, delivers from the off in the second story of the boxset, Eclipse, and it really shows off the production values that Big Finish can bring to its releases. It’s actually one of the best produced boxset for quite a while, and the storyline lives up to that.

There’s comedy quite early on, and then it’s as the atmosphere builds that having good acting combined with direction, music, and sound effects so in sync really shines through. A story about a swarm of moths on an alien planet may not be the obvious contender to introduce a younger listener to Doctor Who, but Eclipse is so well done that it becomes a great gateway story, and explores a topic that is of interest to the younger generations which is our relationship with the world around us.

Lisa McMullin’s episode one script builds just like the atmosphere, with multiple layers which you can tell the actors are enjoying; there are some energetic performances that lift the story further and some great delivery of lines like:

“I wonder why everything always seems harder to bear at night; it’s like hope goes down with the sun.”

Episode one ends with a cliffhanger, and while episode two doesn’t quite have the same wow factor of the first, it still pushes the story forward at a pace, and includes some body horror before delivering its lesson in earthly morality. Again, we get a behind-the-scenes reward here too, with the writer talking about Charley getting her autonomy as a ‘20s woman. It’s a top listen, and you would not believe this was all remotely recorded.

Eddie Robson’s The Slaying of the Writhing Mass is the third story of the boxset and it basically takes place in an episode of 1990s animated children’s television series The Magic School Bus. Basically, there is a queue of time machines in the vortex waiting to watch the titular slaying of the Writhing Mass, and there’s refreshments and entertainment to stop these time tourists from getting overly bored before it’s their turn to drop into real time to witness the event.

The Doctor and Charley appear inside the wall of one of the school trips to the event, accidentally materialising around a student – Constella – who is dropped into the TARDIS swimming pool. The rest of the episode is a sequence of consequences from that, exploring the vortex queue in the process and primarily acting as a set-up for episode two with another big cliffhanger.

Split up for almost the entirety of the next episode, the Doctor and Charley are kept busy with a lot going on with the main members of the supporting cast. The pieces of what turns out to be a temporal puzzle unravel into proceedings and the TARDIS team get tied into the story. There’s a very Murray Gold-esque soundtrack at times, and the story neatly resolves itself by the end. It is maybe not as ‘in-period’ of the Charley era as the first half of the boxset, but is a good listen nonetheless.

At the end of the boxset is Nicholas Briggs’ Heart of Orion. Back in 2001, Sword of Orion was Big Finish’s first attempt at the Cybermen and also Charley’s first TARDIS trip. This story is a sequel to that, and like the original, it’s a very Nicholas Briggs-centred creation.

In the release 21 years ago, he filled a lot of behind the scenes roles as well as writing the story; whereas this time the work is shared out a bit more but Briggs is still on writing duties. It’s definitely a far stronger script than its predecessor (itself a remake of an Audio Visuals production of the same name), and Briggs knows the Eighth Doctor and Charley combination well, but there is a fair amount of just skulking around airships on this one.

However, for long-term fans of Big Finish and Charley Pollard, which is the likely demographic of this release, then this is a rewarding story. It utilises its Orion War backstory straight from the off, as some salvagers discover a shredded spacesuit worn by an android (the belligerents against the humans in the Orion War). Cut to the Doctor and Charley in the TARDIS, receiving a signal from the Garazone system that they can’t quite decipher. As Charley points out, the last time they were in that sector of space, they only got out alive because of an android woman who sacrificed herself for their survival.

And so the TARDIS lands on an airship in the future and they step straight into a political and emotional story of deceit, danger, and the returning Deeva Jansen. There’s a missing persons plotline that feels more Torchwood than Doctor Who, but it sets up later parts of the action that unfolds. Also, there are tropes used from Cybermen stories even though they don’t actually appear in the story. You can imagine they may have appeared in a previous draft in some capacity.

The stakes only get higher as the story goes on, which is important not only for the engagement of the listener but also as the story that’s been chosen to close the boxset, and there’s a really well executed twist that demonstrates the acting strengths of Paul McGann and India Fisher. And possibly the strongest part of Heart of Orion is its ending, which is a resolution in multiple ways and casts a classic, but very strong, science-fiction question.

It’s a boxset that douses itself in nostalgia for Big Finish’s early years, but particularly for an audience that can listen to Charley’s first adventures for free on Spotify, it is still fresh enough to appeal to newer Big Finish buyers.

Doctor Who: Charlotte Pollard – The Further Adventuress is on sale now from Big Finish.

Reviewed: The Thrill of Going On Further Adventure(s)s with the Eighth Doctor and Charley 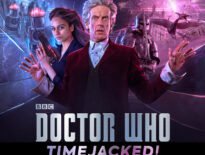