After two boxsets of standalone stories, the third volume of The Eleventh Doctor Chronicles kicks off with a 12-part story arc, spreading across four boxsets. To be perfectly honest, I remember how disappointed I felt about the outcomes of Series 7 in my teenage years; a missed opportunity for a decent build-up towards the 50th anniversary, lacking two-parters and proper story arcs.

But this time, Big Finish has found a way to bridge the gap between The Snowmen and The Bells of Saint John, by giving us plenty more adventures set halfway through the series, something I wish Steven Moffat had done as showrunner. Three character-driven stories with strong emotional moments, the results of Geronimo! are outstanding. And isn’t it amazing that the Eleventh Doctor gets to wear the same attire from the 2012 Christmas special, whilst travelling in the Series 7B TARDIS interior (which deserved way more televised appearances)?

Now, first of all, the boxset comes with a short prologue as a bonus digital download. Simply titled Clara, it features the Eleventh Doctor (voiced by Jacob Dudman) on the search for his future companion Clara “Oswin” Oswald, as part of establishing the main story arc. It’s very much an homage to the Series 7 prequels, such as the brilliant Pond Life, with plenty of funny moments and references to the past and future. While the prologue is optional, I say it’s best to listen to it first before the entire boxset.

(As I move onto the main stories, I won’t be discussing much on plot details, apart from that the Doctor receives some helpful advice from River Song. Yes, there may be a few spoilers along the way, but I’ll make sure to keep it minimal as possible.)

The first episode, The Inheritance, written by producer Alfie Shaw, sees the Doctor meeting his new companion Valarie Lockwood (Safiyya Ingar), a cyberneticist, and her mother Patricia (Mandi Symonds) on Earth in the 54th Century. It explores the commentary on capitalism with suspicious activities involving Arabella Hendricks (Lara Lemon), CEO of the Fulcrum Corporation, and a virus infecting Research Rig 6. I love how the story also touches upon grief. Not just for the Doctor, as he’s gradually moved on from losing Amy and Rory, but also the tragic consequences surrounding Valarie. For an opener, it’s a unique way to introduce a new companion whilst laying the groundwork for the main story arc and beyond… with an unexpected, thrilling cliffhanger. And doesn’t Safiyya Ingar make a marvellous debut as Valarie? Not just for this story, but for the entire boxset!

The second episode, The House of Masks, written by Georgia Cook, sees the Doctor and Valarie ending up in 18th Century Venice during Carnivale. But they soon become embroiled in a clash between Lady Sicura (Genevieve Gaunt) and Captain Tomasi (Fode Simbo). A brilliant character-driven piece with a few twists and a strong resolution, it marvellously avoids serving as a rehash of The Vampires of Venice (bar a few references to the episode). Not to mention the heartbreaking homage to the closing moments of Gridlock, which further develops the chemistry between the Doctor and Valarie; it’s a helpful way for them to bond by sharing their experiences of enduring the worst.

The third episode, The End (a ridiculously clever title), written by Rochana Patel, sees the Doctor/Valarie dying from cardiac arrest and vice versa. Flipping between two timelines which mirror the same event, it has the wibbly wobbly, timey wimey vibes of the Moffat era with, perhaps, a few elements of Amy’s Choice and Last Christmas (2014). A distinctive experimental audio to close the boxset.

Every time I hear the Eleventh Doctor in these audios, I don’t picture Jacob Dudman. I picture Matt Smith. Completely identical and uncanny, he perfectly captures the incarnation’s vocal essences and mannerisms throughout the entire boxset, just like in the previous volumes. It is sad news, however, that Dudman is stepping down from the role after six years, but I respect his wishes. Nevertheless, doing a story arc across four boxsets is the best way for him to bow out (not referring to bowties, which are indeed cool).

I know we’ll have to wait until February 2023 for All of Time and Space, and 2024 for the final two volumes, but I would highly recommend trying out Regeneration Impossible, the first ever full-cast, multi-Doctor Short Trip (set before The Snowmen), also written by Alfie Shaw. It delivers a simple yet brilliant premise, with Dudman performing both the Eleventh and Twelfth incarnations. And if you want to try another serialised adventure with Dudman, there’s also the full-cast Twelfth Doctor Chronicles boxset, Timejacked!

Overall, Geronimo! is a perfect starting point for anybody who wishes to try out an Eleventh Doctor audio release. Despite not being a huge fan of this era, the serialised nature works out well for Series 7; a sharp contrast with the TV episodes. Wouldn’t it be funny if they do boxsets using each incarnation’s catchphrases as the respective titles, such as Fantastic! for the Ninth (Christopher Eccleston), or Allons-y! for the Tenth (David Tennant)? 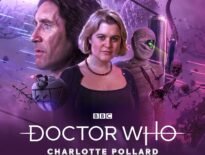