The first season of Big Finish’s Ninth Doctor Adventures finished in style with Old Friends, a strong boxset that really showed what Christopher Eccleston can bring to the role of the Doctor.

Fond Farewell by David K Barnes is the first of three episodes in the fourth boxset, and kicks off with a cold open that throws you straight back into the first Russell T Davies era. Eccleston is immediately on top form, a standard he will carry through the set, and you can quickly tell that Big Finish is really making use of him as an actor rather than giving him content he can have a relaxed day in the booth with. It brings out the best from a man who we know has high standards for his work.

The story takes place in Fond Farewell, an intergalactic funeral parlour, and revolves around the funeral of naturalist and adventurer Flynn Beckett, known for exposing companies for unethical practices and an old friend of the Doctor. And prior to his death, he made sure that the Doctor would be invited to his funeral.

Fond Farewell’s funerals are a little different to the standard tear-filled affairs you would expect, as they specialise in bringing the dead back to life. Kind of.

The Doctor’s unease about this concept is soon followed by several violent incidents and a whodunnit mystery contained in the parlour that no one can escape from. As tensions between guests rise, and suspicion turns towards the Doctor too, it requires the very best of his people skills to keep on top of the situation.

The episode is simply a great example of science-fiction, and the robotic assistants repeatedly delivering an eerie message drives the audience to what the outcome of the story might be. It takes longer for the Doctor to have some ideas, and he truly has to delve deeper to save the day. Although the Doctor’s own relationship with death is not explored much, and it is in fact quite a bouncy story rather than a sombre one, it still provides the cast with lots to chew on in a wide variety of emotions.

Next up is the two-part season finale, which utilises Doctor Who and Big Finish’s own mythos to really build a big conclusion to Eccleston’s return to the role.

Way of the Burryman by Roy Gill is set in Edinburgh in the early 2000s and immediately introduces another old friend of the Doctor, Brigadier Lethbridge-Stewart, and then future UNIT officer (and Lady Christina chaser) Sam Bishop. This is in effect an origin story for Sam, who is having to choose between life with his girlfriend Fiona or travelling the world as a solider. Let’s say the events of the final two episodes will end up making the decision for him.

Once the Doctor and Sam meet, they bounce off each other really well, even if they are not in agreement on quite a few things; there’s a huge amount of energy in Eccleston’s performance while Warren Brown plays Sam in a way that clearly distinguishes him from his later years as a gung-ho UNIT action hero. But if you’re unfamiliar with the UNIT or Lady Christina ranges, then it’s actually possibly even more enjoyable for a listen to have this be your introduction to the character.

The Burryman is an interesting concept as it looks like a spiky plant monster but is really just a town tradition of making a scary-looking costume and walking it around the city centre. Or at least that’s the starting point. And the Forth Bridge is the finish.

There’s a thread through this boxset of what happens after or beyond death, and that creeps into this story via multiple places and characters. It probably takes one internet image search of the Forth Bridge, given it’s such a distinctive design but not one that is necessarily embedded in the global cultural consciousness in the way that London landmarks are, to really visualise the setting the story moves into in the second half and it does the brilliant Doctor Who thing of taking such a landmark and doing something so memorable with it that for many people a new association with the place is formed. You have to wonder how many people worldwide think of the Ninth Doctor’s first episode when they see the London Eye, or have looked at the scaffolding on Big Ben for the last few years and wondered if a pig in a spaceship was to blame.

Without spoiling the events that follow any more than the cover art does, another old ‘friend’ appears and while the Doctor tells the Brigadier that he will last forever, with some great continuity to earlier stories, one of his oldest foes prove their longevity too.

The final act of the episode links directly to one of the stories from the third boxset, requiring the Doctor to confront his past and make one of those huge unenviable decisions that have colossal consequences.

The Forth Generation begins with a Moffat trick for two-parters by having a time jump before the titles, and then lands itself in the action and the consequences of the previous episode.

Without spoiling a clever plot any further, the title of the episode does refer to the army of Cybermen the Doctor and his friends are up against, and there’s also an experimental submarine nearby with a nuclear power supply that adds to the drama stakes.

Although the familiar ‘person is converted, their lover/friend tries to appeal to the human emotions still inside’ trope is used and to the usual enjoyable degree, the relationship used in this example is actually one listeners would care about, and it’s well played by the actors so it’s forgivable.

The way the Cyber army is dispelled is a bit ‘eh?’, but the threat actually remains, so it’s better to say the Cybermen are stopped in one area first to then set up a second, more personal, showdown.

Series 1 of The Ninth Doctor Adventures ends on an important moment in Big Finish continuity, by setting the path of one of its frequently used original characters, and of course there are moments between the Doctor and the Brigadier that many would have hoped for. Perhaps the best Brigadier moment though is actually in the behind the scenes where Jon Culshaw, in character as the Brigadier, talks about knowing the Ninth Doctor’s burden. It’s beautifully delivered, and reminds the listener of where this meeting takes place in both characters’ timelines.

Eccleston’s performance is the biggest selling point of almost all Ninth Doctor releases, because he gives it everything and really rewards those who have waited 16 years for him to return to the role, but also Old Friends really does deliver as the end to a series that shows how coherently planned The Ninth Doctor Adventures already is by Big Finish. And Series 2 delivers as well… 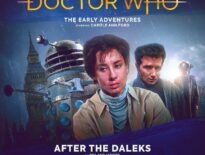 Big Finish After the Daleks, Reviewed: A Thoroughly Modern 19… 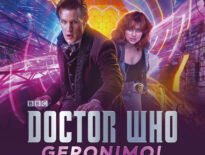