The Eighth Doctor, Liv, and Helen Are Back to Fight Daleks… and a Talking Mongoose?! Big Finish has revealed details of the next Eighth Doctor Adventures boxset, What Lies Inside?, which is due out in November.

In a two-part opener, the time-travelling trio wrestle with the Paradox of the Daleks! Then in The Dalby Spook, based on a bizarre real-life case, they explore the mystery of Gef the talking mongoose.

The Doctor, Liv and Helen are travelling once again in the universe of space and time…

They find some old enemies causing havoc on a temporal research station, before a trip to the Isle of Man in the 1930s, to encounter a famous enigma.

The two stories in this set are:

Paradox of the Daleks by John Dorney (2 parts)

When the TARDIS is drawn to a space station running temporal experiments, the crew discover Daleks in control in the aftermath of an invasion. But these are no ordinary Daleks…

To stop his mortal enemies gaining control of the time technology, the Doctor must work out why these Daleks are here and where they came from.

A war fought through time has many fronts – and in this battle, the Doctor, Liv and Helen will face mortal danger in every time and place they find themselves.

The Dalby Spook by Lauren Mooney and Stewart Pringle (1 part)

After encountering Harry Price, the Doctor decides to solve an infamous case before the paranormal debunker can.

But Liv and Helen are more concerned for the girl at the centre of events. What is really going on at the remote Isle of Man farmhouse? And who is Gef, the talking mongoose?

“Paradox of the Daleks is a slightly complicated tale of twisty-turny time-travelling shenanigans. It was great fun to plot out and write.

“We’ve recently gone through a series of Eighth Doctor box sets, telling big arc stories, so it felt like it was time to do something different and more stand-alone. It’s always good to start a new era with the Daleks. It’s been a while since we had them in the Eighth Doctor range and Helen Sinclair’s never actually met them.”

“The Dalby Spook is inspired by the somewhat true story of Gef the talking mongoose. In the 1930s a family on the Isle of Man said they were being haunted by it. We felt like it would make a great story but I don’t think either of us anticipated it would become a Doctor Who episode. I have very clear memories of watching Doctor Who: The Movie as a child so writing for the Eighth Doctor was quite moving and very exciting.”

“It’s our first time writing for the Eighth Doctor, Liv, and Helen and it’s been an absolute joy. They’re such an incredible TARDIS team and the fact that they bring such different personalities, skills and life experiences is really exciting. These are three of the best actors in the whole country, and now they’re meeting Gef!”

The Eighth Doctor Adventures: What Lies Inside? is available to pre-order as CD box set (and download) for £19.99, or a digital download, for £16.99.

The Eighth Doctor, Liv, and Helen Are Back to Fight Daleks… and a Talking Mongoose?! 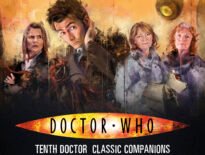