Two former Fourth Doctor companions, and members of UNIT, will reunite with the Doctor later this year — but not the incarnation they know!

Christopher Naylor and Eleanor Crooks will reprise their respective roles of Harry Sullivan and Naomi Cross, joining the Seventh Doctor, as played by Sylvester McCoy.

Plus, they’ll be up against the Daleks as well as some murderous elves…

Bethany Weimers, who makes her directorial debut with this set, said:

“Aged six, I hid petrified behind a cushion as I watched the Seventh Doctor fight the Daleks. Now, here I am, over 30 years later, directing Sylvester McCoy himself as he once again battles his long-time enemy. As if the Daleks weren’t enough, we also take a trip to Elvish London as it stands on the brink of war. My first time directing for Big Finish has been an absolute privilege. Fantastic cast, wonderful stories, and just a lot of fun.”

“It’s an exciting prospect for Naomi to re-embark on adventures with the Doctor. You can absolutely tell she’s loving the trio being back together, with a twist of course! It’s so much fun to throw myself back into Naomi and a whole new dimension of unknowns. With a super exciting new storyline, this one is certainly worth the wait!”

“Poor Harry has found himself rather whizzed around time and space since his path first crossed with the Doctor and things show no sign of stopping! It’s so exciting to be back in the TARDIS with Eleanor and working with Sylvester is a real thrill. I love exploring Harry’s mixture of bewilderment, exasperation, and exhilaration as he and Naomi try to find out exactly where they belong on Earth.” 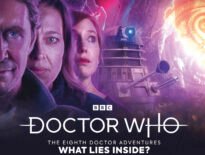 Merchandise The Eighth Doctor, Liv, and Helen Are Back to Figh… 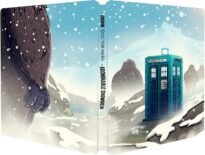