Out Now: Big Finish’s The War Doctor Begins – He Who Fights With Monsters The fourth and final (?) volume of The War Doctor Begins sees the titular incarnation (Jonathon Carley) on a mission to assassinate a mysterious Time Lord, the Barber Surgeon (Nicholas Le Prevost), in He Who Fights With Monsters – a three-part epic written by Robert Valentine.

Since the very start of the War Doctor’s origin series, I’ve been so impressed with Jonathon Carley’s portrayal of this incarnation’s younger self. From the vocals to the mannerisms, his uncanny impression is marvellously identical to the late John Hurt.

The Doctor is no more. A warrior has joined the Time War between the Daleks and Gallifrey. But how far will he go? What lines will he cross? How much of himself will he sacrifice?

As the Time War takes a dark new turn, the War Doctor is tasked by the Time War Council with locating and assassinating a Gallifreyan renegade waging their own private campaign against both the Daleks and the Time Lords. Who is the mysterious Barber Surgeon, and can the Doctor complete his mission without becoming all that he abhors?

The Doctor journeys towards his target through the ravages of the Time War, the trail leading him back into his own personal history. With the Daleks close behind and the mysterious Barber-Surgeon anticipating his every move, he comes to suspect that this is one mission he won’t be coming back from.

The Doctor is missing in action. As Gallifrey and Skaro face total destruction, Time Lord and Dalek forces converge on the realm of the Barber-Surgeon. From his junkyard fortress in a lost dimension, the renegade warmonger is about to create his ultimate weapon… Who or what can possibly stop him?

“What tips the War Doctor over the edge into accepting this mission is curiosity, which has in many cases been the Doctor’s downfall. He wants to get to the bottom of who the Barber Surgeon is and if he can be stopped. He doesn’t trust anybody else to do it and if he falls into the wrong hands, it could mean catastrophe. At this point, what has he got to lose?

“The whole story is absolutely stacked with layers and subtext. In the finale of this series, we confront that head-on by asking ‘Who is the War Doctor?’ Who was he once upon a time and who could he become? As much as he’s tried to step away from the identity of the Doctor, he’s never been fully able to escape it.”

“I love the contradictions in the script. Jonathon’s Doctor is so vicious, generous, moved and brutally cold – he’s covered all of that gamut through these three episodes and yet the segue between one emotion and the other is done brilliantly – really supported by the writing of course.”

“I’ve always had a lot of questions about the War Doctor in terms of how bad he got for the other Doctors to fear and ostracize him the way they do.

“I think the Doctor feared entering the Time War because he knows that if anyone can finish this, it’s him. He fears that if he abandons his Doctor qualities and values, whatever is left of him would not only be unbeatable but monstrous.”

Also starring Ken Bones as the General, with Nicholas Briggs as the voice of the Daleks, He Who Fights With Monsters is out now from Big Finish.

And if that’s not enough, you’ll be excited to know that Big Finish’s The War Doctor series is scheduled to make its radio debut on BBC Radio 4 Extra. Starting with The Innocent today (17th December 2022) at 4pm, it’s the first of 12 audios to feature the late John Hurt reprising the role. Yes, “All twelve of them!”

Out Now: Big Finish’s The War Doctor Begins – He Who Fights With Monsters 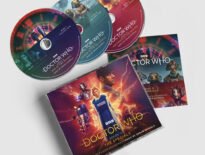 Merchandise Doctor Who Series 13 The Specials Soundtrack to be… 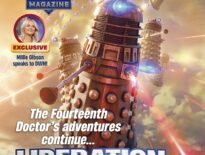