Margot Hayhoe (Assistant Floor Manager, Production Manager) has worked for decades in countless BBC productions, including Doctor Who (on various stories from The War Machines to Snakedance), and The Triffids (1981). Neil Cole has just beautifully restored an original miniature from that iconic adaptation, for his Museum of Classic Sci Fi.

I spoke with her exclusively for the DWC.

DWC: From all your experience in floor managing and producing, who do you value behind the show, the ones we don’t see on screen?

Margot: All the creatives, designers, costume, make-up, and without the camera crew nothing would happen. You can’t pinpoint one because every person is important, whether they’re in for a day or much longer. It’s a big family, trying to make the best programme we can.

In the past it was a bit like a university, all the background departments, reference and photo libraries. If you rang the right department, they’d bend over backwards to get you what you needed. Then after the demand to make each part a business, it was cheaper to go out and buy a record than to borrow it from them.

Margot’s husband Mike was quietly accompanying her, staying out of the limelight. But it turned out he was a camera operator, who happened to film the Jon Pertwee into Tom Baker regeneration!

DWC: A little bit of history!

Mike: It wasn’t a big deal at the time, and what we did wasn’t very complicated. We just stopped the recording, and we felt that ‘is there anything more?’ moment. Barry Letts went out of the studio leaving Jon Pertwee lying on the floor. He brought in Tom who was lain down on the floor close to Jon, and each had a camera on them. We checked the heads were in the same position, then the effect was just the vision mixer with two levers on a desk!

The 21st century versions involve emanations of great fireworks and SFX. We had some special effects, but didn’t use them much, regarding them as rather… obvious.

Margot Hayhoe, Graeme Harper, and Neil Cole formed a panel at the event celebrating Neil’s museum and a new film about it.

Q: Margot, how difficult was it doing Fury from the Deep with all that foam? Is it true Patrick Troughton fell in, got up, and kept filming?

MH: I can’t remember if Patrick fell over, but a lot of us did! The foam just went everywhere; it was chaos. We had all of TWO cameras to film it. The visual effects dept were very good; they said ‘release the foam!’ — this wall of foam just grew and grew. We were all edging back towards the studio wall. And we got told off for making the floor too wet!

NC: The Caves of Androzani and Revelation of the Daleks are two of my favourites. You seem to get the small budgets and make something incredible.

GH: You need a lot of experience, which I didn’t have in those days as a director. But Bob Holmes’ script was great. I was excited that I was going to do it. Sometimes decisions are made for money-saving, but work, like the decision to use real machine guns and blanks, not expensive laser effects.

B: What changes have you experienced in the BBC?

MH: Budgets are much larger, and they use single camera like movies. I miss the rehearsal time, four or five days so you could see the whole story. Now, no one has an overall feeling for how it will turn out. That’s a loss. TV has improved technically, but there’s a lot of dumbing down.

GH: We used to rehearse; in the ’90s, an hour and a half programme would be two weeks’ rehearsal. Ideas and decisions were sorted during rehearsal so the filming time was efficient. That was a fantastic system. Now, the director has to work out the plans, sometimes with the sets, in advance, and you have to visualise without talking to any actors. In 10 or 15 minutes, you’re supposed to be ready to show how it’s going to go: I find that ridiculous. Back in the ’80s, it was multi-camera, rehearse, record. Now, it’s shot backwards, forwards, and sideways, and no one has a sense of what the whole thing is. I moan about the system, but all the big studios show amazing drama, so it must work!

NC: What about ‘producer’s choice’?

Graeme and Margot both groan.

MH: Once upon a time, the BBC was a big happy family and we all helped each other out. The departments were all told to become business units, had to sell their stuff to producers. Budgets forced producers out of house. It was the death of costume, design, and all those departments. We lost all the flexibility and mutual help. Bureaucracy. In the ’60s, we were in a place of excellence, employed there.

Q: What’s it like to have part of your life preserved in Neil’s museum?

GH: Fantastic! You will definitely want to come in. No matter how much money you throw at Doctor Who, it’s still very hard work, so it’s brilliant that people want to see the work behind it. Extraordinary. You’ll never escape this fantastic family.

NC: The BBC never had a plan to look after their stuff.

MH: They spent a lot of money creating a very accessible, well-organised costume department. PC came along and they had to sell it off. But can I remind everyone — there is a baby Triffid in the room! I am very grateful Neil has restored it; it is admirable.

Q: Why is that BBC adaptation so iconic?

MH: John Duttine was wonderful, and the Triffids themselves were scary. Glycerine gave them a horrible feel, and the SOUND really terrified people. The clacking, knocking menace. And the opening titles were eerie; they reminded me of lockdown.

NC: And it IS the book, not a movie vaguely based on the idea!

Q: What’s your best tip for how to be successful in your roles?

GH: When I was doing Bergerac, I rang Mark Campbell for advice. He said, ‘keep it moving; move the actors, move the camera, preferably both. Do that and you’ll never stop working’ – and I haven’t!

MH: Watch them, learn how to – or how not to. Be polite, and not shouty. [Margot then recounted a time when she shouted at Graeme for playing the harmonica when everyone else was trying to sleep!] Never be afraid to ask, don’t pretend you know.

NC: In the early days, edits cost so much; how did that affect you?

MH: Me, not so much, but the directors would have to accept stuff they weren’t happy with. Rehearsal helps, especially live TV like Z cars – especially if you were doing the back projection and it ran out!

GH: I was once forced by the person training me to record one straight through, as live. It was ‘orrible! But it worked like a dress rehearsal, because we did it again that evening and it was perfect.

Q: What are your memories of the big farewell on the beach scene from Doomsday?

GH: It was a big scene for Billie [Piper] because it was filmed in the middle: she had to work up to say this big goodbye to the whole show, then go back to four months more. I didn’t know either of them well, and it was a huge, 52 day block – no one has done that before or since. 15 nights of overnight shoots. I went to see them in make-up to discuss how we were going to approach it. There’s an etiquette when you’re doing close ups with artists; you do the lady first. I knew she was going to be emotional and wanted to be sure we got that on camera! We didn’t want to ‘waste’ her tears on David [Tennant]’s version. Fortunately, she wanted to go first because she didn’t think she could bring it back for a second go. But the first take was awful, windy, hair everywhere, snot! She was upset that she had to go again, but it was brilliant. Now I’m getting emotional myself!

Come back to the DWC later this week for an exclusive interview with Graeme! 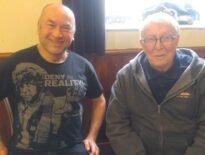 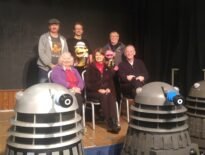