Aneurin Barnard is joining the cast of Doctor Who Series 14, playing “the mysterious” Roger ap Gwilliam.

Well, the BBC calls him mysterious. Fans watching on-location shooting in Wales spotted posters of Barnard as Gwilliam, an MP for the fictional Albion party.

Its slogan is “For a bigger, better and bolder Britain.” And that does seem to echo the political campaigns of a few right-wing politicians like Donald Trump. Writer, Russell T Davies, has always been a political writer, and his drama Years and Years really digs at the government. (Personally, I’m hoping the message isn’t “right = bad”, a trap many TV shows fall into; I think it’s a mistake to paint every person of a particular political persuasion as bad. Too far right or left is just as bad. I guess we’ll see.)

That was at Cardiff’s Capitol Shopping Centre, where the local Boots had been transformed into a campaign office.

There’s also seemingly an alien element to him as another slogan brands him “The Space Saviour”.

You might known Barnard for being in the recently-cancelled Netflix series, 1899, or in perennial favourite, Peaky Blinders. He’s been in projects with Doctor Who alumni, including The Personal History of David Copperfield (which also starred Peter Capaldi) and perhaps most notably, We’ll Take Manhattan with Amy Pond actress, Karen Gillan.

Aneurin is confirmed for one episode of Series 14, which will also be the first full season of adventures for Ncuti Gatwa’s Fifteenth Doctor and Millie Gibson as Ruby Sunday.

News Will Disney+ Interfere with Doctor Who? Russell T … 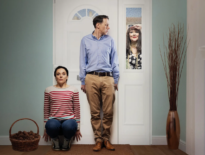