The first episode of Sherlock series four to go before the camera will be directed by Heaven Sent’s Rachel Talalay.
Something of a favourite with Steven Moffat, Talalay was responsible for bringing a darker tone to Series Eight’s concluding two-parter Dark Water/Death in Heaven as well as last series’ masterful Heaven Sent, the one-hander starring Peter Capaldi, a castle filled with traps and puzzles and a mysterious creature called The Veil.
When she joined Doctor Who she was the first American – and the seventh woman – to direct the show. 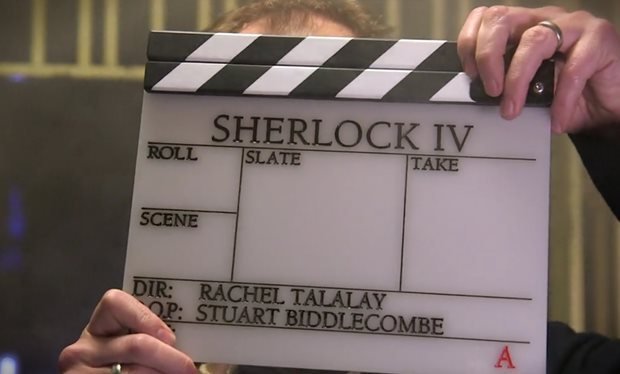 Talalay is also an outspoken supporter of Moffat and has called on BAFTA to acknowledge both the show and the wider sci-fi and fantasy genre when it comes to awards season. In the past she’s also shared behind the scenes details about the Doctor Who production process via her Tumblr page – explaining how she wrangled maximum scares out of Heaven Sent’s narrow corridors and dark passageways.
Talalay’s other credits include work on The Flash, Supernatural, Freddy’s Dead, Legends of Tomorrow and Arrow.
As filming concluded on Marvel’s Doctor Strange at the weekend – which will feature Sherlock star Benedict Cumberbatch as the titular doctor and saw the star stop off for a bit of shopping at a local comic book shop in New York while still dressed as the lead character (no guessing which comic books he purchased) – filming of the three-part Sherlock series four began this week.
In a joint statement by co-creators Steven Moffat and Mark Gatiss, this series will see Dr Watson, played by Martin Freeman, tackle the greatest challenge of them all: Parenthood.
The statement reads:
“Whatever else we do, wherever we all go, all roads lead back to Baker Street – and it always feels like coming home.
“Ghosts of the past are rising in the lives of Sherlock Holmes and John Watson bringing adventure, romance and terror in their wake.
“This is the story we’ve been telling from the beginning. A story about to reach its climax…”.
If you’ve been worried about the ever-closing schedule window that sounds rather ominous indeed.
It’s time to get your #setlock ready as the cast and crew have already been teasing fans via twitter – Mark Gatiss revealed the resident Baker Street skull…

…before posting this video via the official Sherlock twitter page…

…while Amanda Abbington tweeted a little snippet of the episode’s script. And when we say little we mean the top corner.

Based on the timing of the last two series and the subsequent special, it seems likely that Sherlock will air on New Year’s Day 2017.