Nostalgia can be a wonderful thing. A smell, a place, a time or a memory can help to evoke the most wonderful feelings. The same can also be said to happen through sound.
Nightshade continues the latest trend from Big Finish in converting original Virgin New Adventures novels from the early 90’s into fully dramatized audio plays. Although this reviewer will go on record to say that the previous efforts have not been of personal pleasure, Nightshade hits the ground running and doesn’t let up until the very end. In short, it’s fantastic.
Mark Gattis is a name that should be familiar to Doctor Who fans old and new, a fabulous writer with the rare knack of being able to just ‘get’ what Doctor Who is and how to write it. Nightshade was his first foray into the world of Doctor Who fiction. The 1990’s was an odd time for Who, the show was off the air but still being continued in other formats. The New Adventures range of books gave authors the opportunity to take the Doctor further than he had ever been on television, not just in distance but in characterisation as well. As audiences demanded more from their characters, a new generation of writers including Gatiss, Paul Cornell, Steven Moffat, Mike Tucker and Russell T Davies were developing the Doctor and his friends beyond just another stereotypical time traveller.
Nightshade, a personal favourite in the New Adventures range in this reviewer’s humble opinion, was one of the first Doctor Who stories to effectively blend together the mix of old and new. The Classic core values of a Doctor Who story where there with a fresh set of rules and values as well. 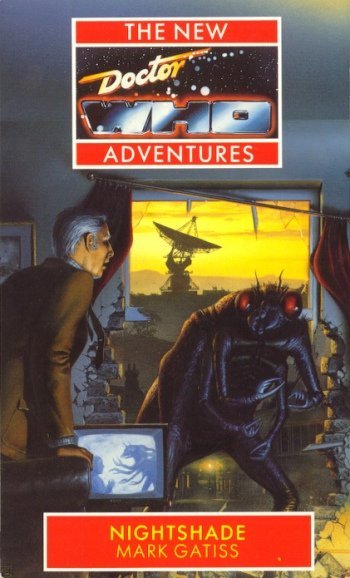 But what of this new and updated version? In a nutshell, it still holds up very well. It’s a powerful tale of nostalgia getting the better of you. It’s about looking back at your achievements with pride but knowing when to let go of the past and move forward into the scary,unknown but exciting future. That’s a story that’s relevant for anyone at any time.
Perhaps the best part of this tale is the sound design as well as the incidental music. This is by no means a small production. Quite clearly, budget has been poured into this. The action scenes are spectacular, the ‘monster of the week’ is terrifying, with a voice that could cut through glass. The atmosphere of a village cut off is scrumptious, helping to evoke the Third Doctor’s era well, a particular quality that Gatiss has always been able to do superbly.
But it’s the incidental music that will leave listeners of a certain age, or with a penchant for the Seventh Doctor’s era. Composer Blair Mowat has clearly been listening to the work of Mark Ayers from the era and composes a beauty of a soundtrack that feels so well suited to the McCoy years, you’ll feel as if you’re listening to a TV soundtrack.
Additional writer and story adaptor Kyle C Szikora converts the source material well here, subtle changes to the dialogue as well as a slightly different ending from the original one of the novel help to carry the story into this newer era of Doctor Who we’re used to and perhaps neaten up some of the looser ends the tale had.
Ultimately, this feels very much like a Doctor Who story we could have expected had the show continued on television in the after season 26. It’s dramatic, exciting, fun, well written (by both its authors) and charismatic as well, a wonderful story excellently told.
Nightshade is available from Big Finish on CD or via download.

by Mez Burdett time to read: 2 min
Reviews Reviewed: Doctor Who and the Zarbi by Bill Strutto…
Big Finish Reviewed: And You Will Obey Me
0
%d bloggers like this: