‘You chose ill when you chose to land on Vortis…’

Lots of people feel like that about The Web Planet.
Ho ho ho. Well, it’s not the greatest Doctor Who story; it never was, either. At the time, the production team were delighted with it: it was totally alien and, to this day, it’s the only story where there are three different alien species, and no humans (or human-looking characters) other than the regular cast. The weirdness of the setting was enhanced by the Vaseline smeared on the camera lenses; it was the first time the series used a choreographer (Ailsa Berk couldn’t do it because she had to go to school back then); it stretched the resources of the programme to the limit. It was marvellous for its day.
Sadly, it all looks very dated now. The Zarbi have been called pantomime ants, and while it’s hard to disagree, it’s also hard to see how they could have been better realised decades before CGI was even thought of.
But even today, a script like The Web Planet would create major problems. These days, the Zarbi could be done by CGI, but CGI is horribly expensive and so they’d still have to be men in suits. And, given that human beings have two big legs and not six little ones, they’d still look a bit silly; it’s hard to see how they could look much better than what was seen in the sixties. And then you’d have to costume the Menoptera (as they’re called in the novel) and the Optera, and find or build a suitable alien landscape, and… it would create so many headaches and be so expensive that it would have to be spiked with other ‘nice idea, but impossible’ storylines. But they tried it in 1965 and they pulled it off, too, even if today we think it looks daft. And it was a success. The Zarbi crop up all over the place in sixties merchandise: they were marketed as the new Daleks and there are sequels to The Web Planet in the original Doctor Who Annual and the (risible) Chad Valley Doctor Who Give-A-Show Projector.
But production values change. You can only appreciate The Web Planet if you think yourself back into the role of a 1965 viewer, into accepting what they would accept. The suspension of disbelief required 51 years ago was greater than what’s required today. These days, audiences expect everything to look totally realistic and don’t have as tolerant and accepting an attitude towards what were then accepted dramatic conventions. A 1965 viewer was willing to accept that aliens will look like people in costumes, that backcloths are going to have shadows on them, that sets are going to be smaller than they ideally should be. Fluffed lines are standard in all drama programmes and so, even, are technical problems – even if they’re as jarring as a Zarbi bonking into a camera. If you compare the scenes on Vortis to the scenes on the surface of the asteroid in Quatermass II, made ten years earlier, they’re far superior. The art of television had developed, and it’s anachronistic to apply today’s standards to yesterday. The distance between us and The Web Planet is 50 years. One could imagine a reviewer of The Husbands of River Song in 2066 sniggering at the rubbishy production values. So much for the time differential. The Web Planet is a workmanlike and competent story. It’s well constructed and the script’s professionally and effectively written. The set-up is good. The story itself is default Hartnell: separate the Ship’s crew, get them captured, have them separately face some perils and escape – get recaptured – escape – and get recaptured. It would have worked better as a four-parter but the budget had to be recouped by spreading it over six episodes. It’s okay. It’s solid.
The novel? Well, I have to damn it with faint praise. It’s all right. It’s not bad. It’s got some good bits and it’s worth reading. As you probably know, it was one of the three novelisations published by Muller in the 1960s; the others were David Whitaker’s Doctor Who and Doctor Who and the Crusaders. The Zarbi is by far the weakest of the three. Whitaker is a fine writer; Strutton is a competent one. Its interest lies in giving us an insight into how Doctor Who was seen, and how it saw itself, when it was still a very new series. Something that will grate about the book is that both the dialogue and the narration call Hartnell’s character ‘Doctor Who’ throughout, almost without exception – unique for the novelisations. Even in the sixties, this was an error; Strutton’s editor should have wielded the red pencil with the same ruthlessness applied by the script editors to the screenplays. (Lots of the scripts called him ‘Dr Who’ all the way through and it didn’t get past Whitaker, Spooner, or Tosh. It wasn’t until Gerry Davis took over that Wotan had his wicked way.) The audiobooks are usually complete and unedited, but pages and pages of ‘Doctor Who’ proved too much for them this time, and William Russell’s excellent reading replaces it with ‘The Doctor’.
I didn’t find the novel’s characterisations that great, either. David Whitaker’s Barbara is a fiery and quick-tempered woman who you’d be careful not to cross (and she’s quietly rather sexy too); she’s pretty cardboardy in Doctor Who and the Zarbi. Chesterton is much dimmer than usual and assumes the aliens must be evil because they’re ugly. How very enlightened. (Even Galaxy Four warned against this.) He also keeps wanting to smash things with his mighty fists and he belongs in the pages of a Boys’ Own yarn. Vicki’s a timid teenager and not much more (and she doesn’t look like Maureen O’Brien in the pictures, either). In the first chapter, when Barbara comes into the Tardis control room in the early morning (Ship’s time, presumably), Ian says, ‘It’s nice to see you up and dressed. Does that mean we can expect some bacon and eggs?’ A shame Ian wasn’t around later on: it’d be fun to see how that line would have gone down with Tegan. Or Donna.
As is so often the case with novelisations of Hartnell stories, the book has dated less than the TV version has. If you want to experience the story in all its relative glory, go for the book or the audiobook. The perils of the Tardis crew are effectively conveyed, there’s a good villain in the Animus (Russell has a field day with it on the CDs and he really lets rip), and it’s all quite fun. Quite fun. Not enormously fun, but quite fun. As Paul Daniels would say, you’ll like it. Not a lot, but you’ll like it. 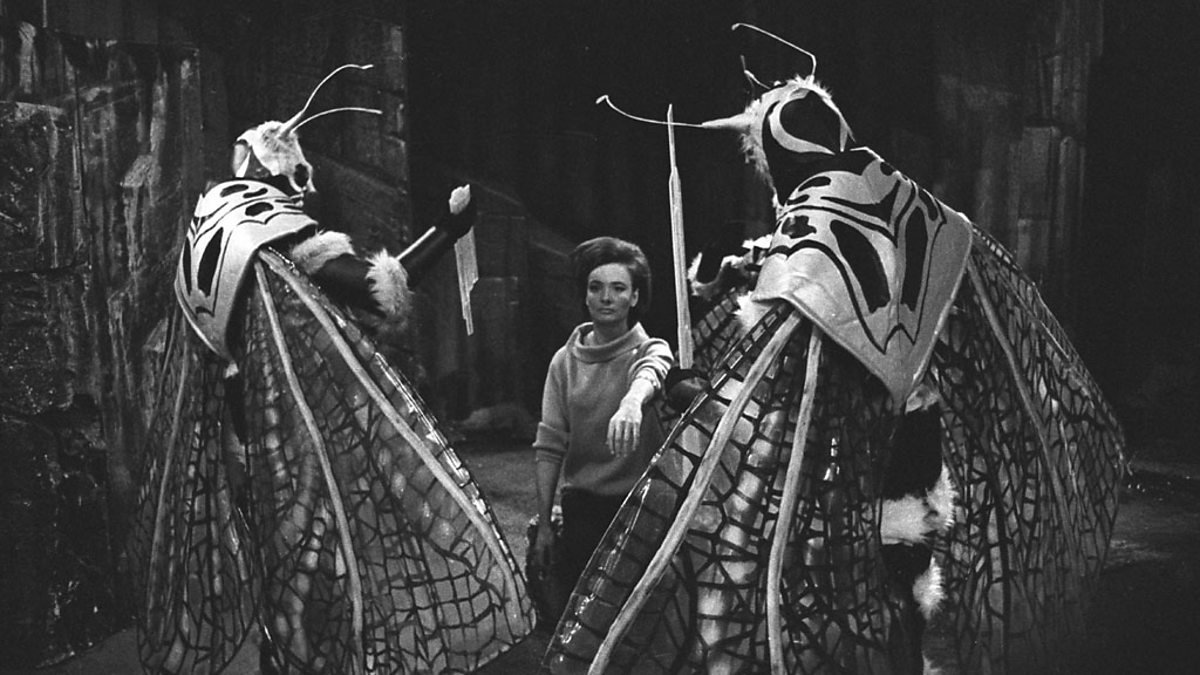 If you’re new to the Target range, could I recommend a few of my favourites? They’re easily available on eBay. The earlier novelisations tend to rewrite the screenplays heavily, often bettering the originals. Malcolm Hulke was particularly adept at this, taking advantage of the chance to do a new draft. Here is a top ten:

Doctor Who and the Daleks (using the Target name for the book, and it’s probably the best of all of them)

Doctor Who and the Cave Monsters (heavily rewritten, witty, and superb)

Doctor Who and the Day of the Daleks (lots of new stuff on life under Dalek occupation, and some of the best ever writing about the Daleks themselves)

Doctor Who and the Doomsday Weapon (another witty and clever rewrite)

Doctor Who and the Green Death

Doctor Who and the Dinosaur Invasion

Doctor Who and the Space War

Doctor Who – Remembrance of the Daleks.

… And, stretching it a bit, an eleventh: Doctor Who and the Dalek Invasion of Earth.

Even if you know the TV versions inside out, do read the novels. They stand up in their own right and I think you’ll be pleasantly surprised by how good they are. TV can’t get inside the characters’ heads in the way novels can; they add backstory and detail, and – especially true for Malcolm Hulke’s novels – they’re very witty. (Major Barker (sic) in The Cave Monsters is one of the funniest characters in science fiction literature.)
Read. Enjoy. But I wouldn’t watch The Web Planet more than once, if I were you. Once is enough.