Reviewed: The Scientific Secrets of Doctor Who by Simon Guerrier and Dr Marek Kukula

Scientific accuracy within Doctor Who tends to matter only if it illuminates something about the human condition – the show, while occasionally wearing its credentials as a hard science fiction on its sleeve, has always leaned more towards Twilight Zone style exploration of technology’s ever encroaching grasp on our lives as a springboard for the kind of fantasy that tends to make a mockery of the very definition itself.
So when episodes like Kill the Moon ask an ethical question about our place in the universe but places freewheeling imagination ahead of at least a hat tip towards the definition of science fiction, and the rigour that entails, we end up wondering at what point did we decide the show was sci-fi and not simply out and out fantasy?
In the past, during the Hartnell/Troughton era, explanations came rooted in scientific fact – or at least a close approximation – now, we tend to solve matters with things like love and instantly birthed moon babies.
Well, there’s no need to worry – the book is delightful. A beautifully packaged, endlessly entertaining look at our universe through the eyes of various incarnations of the Doctor. At first glance, the book has all the hallmarks of the kind of portentous tome that you glance at once and then cast aside forever – or give to the grandkids to fill their stockings – but thanks to its straight forward, ever- inquisitive prose, these potentially dry lessons covering everything from A.I., regeneration, entropy and death, the multiverse and time travel are given a fresh spin through examples from the entire history of the show.
The Scientific Secrets of Doctor Who is one of the best Doctor Who non-fiction books you’ll read this year.
So you have to wonder at the kind of uphill struggle both writer Simon Guerrier and astronomer Dr Marek Kukula faced when they sought to put the science back into science fiction with The Scientific Secrets of Doctor Who.
Learning from the mistakes of the hit and miss anniversary special with Dr Brian Cox, the book never makes assumptions about the readers knowledge or even the extent of their interest in the subject matter; there’s never a condescending word or an over reliance upon technical, textbook examples. As an introduction to the wider world around us; you’ll be hard pressed to find a better guide.
However, that’s just one aspect of the book. To sweeten the deal, 15 short stories which cap each chapter off from some of the best Doctor Who writers working today including Jenny T. Colgan, Jonathan Morris and Andrew Cartmel. 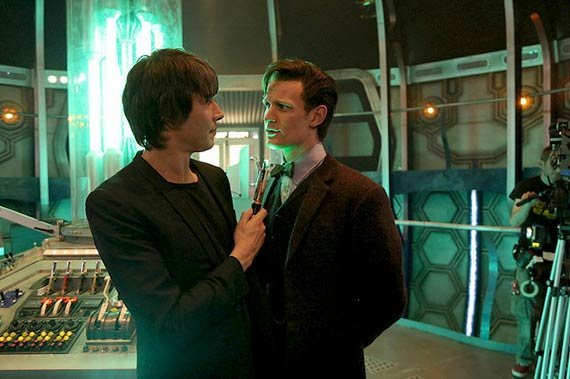 Although they’re no longer than ten pages, each serve to either set up the next field of inquiry with a splash of colourful prose or act as a break for when the lessons begin to verge towards the ponderous. It’s a winning pay off for those not particularly interested in the science (although one would question why you would buy such a book if science isn’t your bag) or for those who want to see some of the lessons brought to life.
Particular highlights include Jonathan Morris’ Ninth Doctor adventure The Hungry Night, George Mann’s Fourth Doctor/Sarah Jane tale The Lost Adventure (with a little nod to The Face of Evil), Una McCormack’s bittersweet Eleventh Doctor story In Search of Lost Time, and Mark Morris’ Third Doctor and UNIT tale, The Piper.
The bundling together of fact and fiction does raise a few questions. Some may baulk at having to wade through chapters of scientific inquiry to get to the relatively scant short fiction goodness while others might find little that’s new in the scientific sections to warrant forking out for less than half a books worth of new prose.
Ultimately The Scientific Secrets of Doctor Who, with its mixture of engaging, straightforward and rewarding inquiries into the fascinating science behind the show and some equally entertaining short stories, is one of the best Doctor Who non-fiction books you’ll read this year.
The Scientific Secrets of Doctor Who by Simon Guerrier and Dr Marek Kukula is available to buy now in Paperback format from Amazon.

Reviewed: The Scientific Secrets of Doctor Who by Simon Guerrier and Dr Marek Kukula