Scott Gray, Martin Geraghty, and co. produced such high-quality tales for the Eighth Doctor in the Doctor Who Magazine, it must’ve been a concern for readers when the comic regenerated, especially as it would need to be more accessible for the new fans that would immediately latch onto the magazine. I was one such new fan, with Rose as my initiation into the fandom.
My first issue of DWM was #355, which meant I was lucky enough to get on at the ground floor as far as the Ninth Doctor comic strip was concerned.
The Cruel Sea collects together all the comics starring Christopher Eccleston’s Time Lord from Doctor Who Magazine, plus another from The Doctor Who Annual 2006, as well as a short story from the latter. And it’s really rather wonderful.
This isn’t just nostalgia talking: admittedly, The Love Invasion, Art Attack, The Cruel Sea, Mr Nobody, and A Groatsworth of Wit all hold a special place in my heart (combining a new found love of Doctor Who with my deeply-ingrained love of comics), but I can see their faults while admiring their considerable achievements.
After the Eighth Doctor’s final DWM strip, The Flood, The Love Invasion does feel like a slight bring-down for regular readers. Then again, it’s a solid story with great art, a nice subversive plot, and colours that leap off the page: The Flood was a series finale; The Love Invasion is an opener. That means it’s fresh and bold and, naturally, a good stepping-on point.
Plotted by Gareth Roberts, and DWM editor, Clayton Hickman, and scripted by the former, The Love Invasion‘s biggest achievement is keeping the same audience as before but welcoming in a whole new generation too. It’s nothing ground-breaking, but encapsulates the mood of the Russell T. Davies era beautifully. 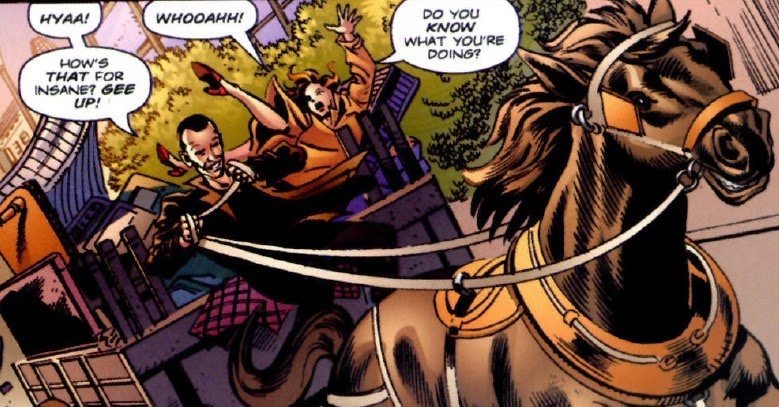 The three-part story feels light and breezy with hints of something darker underneath – which is a pretty accurate description of the Ninth Doctor actually.
It’s 1966 and the “Lend A Hand” girls are more than happy to help with anything you require. But in true Doctor Who fashion, their smiling façades hide sinister actions. The inevitable alien, a Kustollon, has a surprising plot to tamper with Earth’s history; his backstory, too, feels right for this era of the series.
Unfortunately, the Kustollon’s design is a bit underwhelming: he’s your standard “green with three eyes” alien, and at times reminds me of the X-Men foe, Mojo.
Mike Collins’ next monster design is Cazkelf the Transcendent in Art Attack, and as you might expect with that name, he’s a Laurence Llewelyn-Bowen type. Poor chap. This is a tightly-plotted one-part story, written and drawn by Collins, in which you’re forced to ask where he gets all his time?!
Delving into the commentary that supplements the graphic novel, you discover that the artist was up against the wire for The Love Invasion, but still managed to create a fantastic stand-alone comic. For Art Attack, he appears to have taken a leaf out of John Ross’ book (or, if you will, sketchpad), including enough detail but really getting carried away with the movement of each page. It’s great work; a vibrant, rather joyful story with undertones of sadness, again echoing the mood of Doctor Who Series 1.
It’s an underrated strip that feels poignant and smart, even though Cazkelf doesn’t feel like a genuine threat.
Speaking of one-part tales, the graphic novel collects Mr. Nobody from the 2006 annual, the only one published by Panini (and still the absolute best. It all went downhill when Panini lost the rights to do the annuals, but at least they got the chance to give us the sublime 2007-09 Storybooks and the two Brilliant Books too).
This is a welcome – if brief – return for Scott Gray and John Ross. You can see why Ross was asked to work on Doctor Who Adventures, the magazine aimed at a younger audience, when it launched the following year; his pages are immediate and eye-catching. He really understands how to make a page flow. I often think being a sequential artist is akin to being a director: you’ve got to find just the right angles and lights to show action, to show intimate scenes, and to make conversations look interesting. It’s streamlined storytelling, and Ross is an expert. 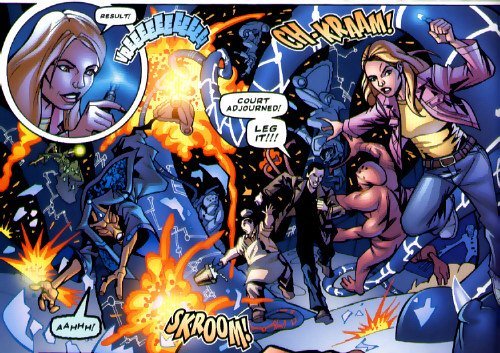 And it’s nice to have Gray back too. He captures the essence of the show and the Ninth Doctor’s tenure perfectly – and so quickly too. He’s given eight pages to explore this incarnation and he does this through the lens of someone inspired by the Doctor. It’s a poignant, happy tale; a slight narrative but that’s to its advantage. In the commentary, Scott sums up:

“Mr Nobody is no epic. It doesn’t tie itself into TV continuity or bring back a classic enemy or reveal some shocking truth about the Doctor’s past. But it does have a point to make, plus exciting artwork, some sparky dialogue, a nice twist, and a solid ending. It remains one of my favourites of the Doctor Who stories I’ve written.”

And I agree with that. A lovely little gem.
It’s not, however, the stand-out story. That would be the eponymous strip, The Cruel Sea. I recall loving it when I read it back in 2005, so would it live up to that memory? Well, clearly it does.
If you’ve seen Dalek (2005), heard The Chimes of Midnight, or read Running Through Corridors, you’ll know you can rely on Rob Shearman. The Cruel Sea more than lives up to his reputation.
The four-part strip is like a fever dream, unlike anything Doctor Who Magazine has published before or indeed since. There are so many bold, arresting images and ideas thrown in the cocktail, including Rose being swallowed by a mirror image of herself, a devoted wife being eaten by her husband, and the Doctor overfeeding a squirrel until it explodes. That last one make the whole tale sound more trivial and inconsequential than it is. (Collins absolutely revels in these bizarre occurrences, bringing a twisted realism that makes it all seem even grimmer. Great stuff!)
My favourite part, however, is a riff on the “did I mention, it also travels in time?” scene in Rose (2005), showing a reckless and callous side to our hero.
With the unusual and smart notion at the heart of it, The Cruel Sea shares something with Kinda (1982), but its closest relatives are The Waters of Mars (2009) and The Curse of the Black Spot (2011). In fact, it feels like a prelude to that 2009 special, even if their interpretations of the red planet vary wildly.
Sadly, the Ninth Doctor’s final comic doesn’t maintain the incredible momentum. A Groatsworth of Wit, though, does have an important place in Doctor Who lore. This was the first chance Gareth Roberts got to write William Shakespeare, and obviously not his last: in fact, word has it that, based on this strip, the BBC Wales production team employed Roberts to write The Shakespeare Code (2007). 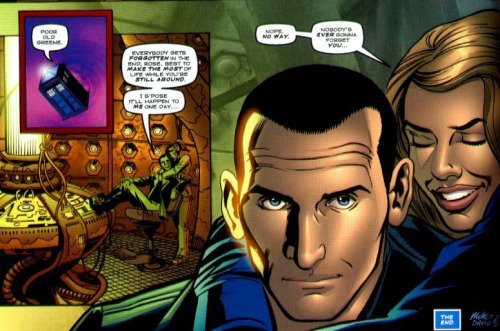 It’s quite a standard story of revenge, fuelled by powerful aliens, but the nicest thing about Groatsworth is how it pays tribute to Robert Greene, a real-life dramatist who stood in the shadow of the Bard. Greene is believed to have criticised Shakespeare, famously calling him an “upstart crow” – it’s a shame that his considerable work is largely forgotten by the public, and he is instead remembered solely in regard to Shakespeare.
In the comic, Roberts seeks to redress the balance, and does so well. It’s fitting that the story features the Ninth Doctor, and the final panel is a sweet reminder of how great a debt Doctor Who owes Christopher Eccleston.
The book is full of easter eggs, too: revisiting the Post Office Tower in The Love Invasion, we briefly glimpse Ben proposing to Polly, for instance; while in A Groatsworth of Wit, Greene visits a modern-day bookshop that sells both the 1968 and 2006 Doctor Who annuals.
If Greene were to have picked the latter up, he’d have found the original printing of a short story by Steven Moffat, one whose protagonist you might already (sort of) know. The tale? What I Did On My Christmas Holidays By Sally Sparrow. Yep, Sally Sparrow, though not played by Carey Mulligan.
Reprinted as an extra easter egg in The Cruel Sea collection, this is an essential read. It’s a seed, one which would, a couple of years later, bud into Blink (2007). But you won’t find Weeping Angels here: the Doctor has been thrown back in time by a quirk of the TARDIS. This is Moffat’s original “timey wimey” tale, and while it lacks the scares of its television counterpart, it remains something special.
It’s curious that Moffat doesn’t write prose, actually: he’s clearly a great writer, whatever the medium, and he gives us a truly touching and exciting ending for this Ninth Doctor book.
Topped off with the cherry-on-the-top commentaries which give new light and appreciation to each tale, The Cruel Sea is a truly fantastic read.
While you can buy The Cruel Sea in paperback on its own, premium subscribers to Doctor Who: The Complete History also receive a hardback copy with their eighth issue.